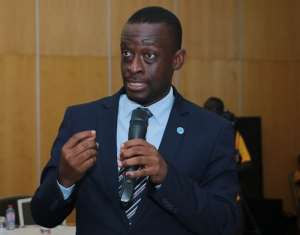 A group calling itself Young Democrats for Effective Leadership in the Central Region are calling for an investigation of the Western Regional Minister, Kwabena Okyere Darko-Mensah over what they described as his possible involvement in the Takoradi kidnapping conspiracy.

The group is of the view that although Josephine Panyin Mensah has allegedly confessed that her alleged kidnapping and pregnancy was all a hoax, there could be more behind the story and hence anyone that has been implicated should be investigated.

“The confession does not only expose the lady and her family but the W/R regional minister, government intrusion, influence from W/R police and the media.

“We believe wholly of them should further be investigated thoroughly, perhaps they all conspired to stage this kidnapping with the following rationale,” part of a release from Young Democrats for Effective Leadership reads.

The group notes that particularly when the Western Regional Minister’s claim of paying a GH¢3,000 ransom to the kidnappers for the release of Josephine Panyin Mensah has been denied by the Police, they have a valid point and expects that he is investigated accordingly.

Find below the full release from the group:

The Takoradi - pregnancy kidnapping saga, exposes the Western Regional Minister, the sway from the status quo of the government to national security, media and the public.

Young democrats for effective leadership, Central region, surmise a better private investigation team should be deployed to do all advance investigations.

Power can be a deadly weapon when in the hands of an indulgence, something must be really erroneous.

The confession does not only expose the lady and her family But the W/R regional minister, government intrusion, influence from W/R police and the media.

We believe wholly of them should further be investigated thoroughly, perhaps they all conspired to stage this kidnapping with the following rationale.

The Western Regional Minister claims that he gave the kidnappers a GH¢3,000 ransom.

Police have also denied claims by the Western Regional Minister that he gave them a GH¢3,000 ransom to be paid to the alleged kidnappers of the 28-year-old Josephine Panyin Mensah, the woman at the centre of the kidnapping-pregnancy saga in Takoradi.

Could it be also that she received money to say this to protect the authorities?

Dr Joseph Tambil of Effia Nkwanta Hospital reported to Empire News that the facility is expected to release the medical report about the victim. This goes contrary to police reports that the hospital has issued the medical reports of this victim. So now the question is which medical Doctor or hospital confirmed and concluded that this victim is faking pregnancy?

We (YDFEL, C/R) think this lady has been forced by high authority to give false confession just to cover up the matter. External threats to her life could force her to say something to be free. threat and pains can be seen in the eyes of this lady, her life is in danger and this could only be from a higher human authority.

Before this incident could be believe unless the police publicly display her results that show negative or a professional doctor should have come out to display the results. She needs a mental evaluation and professional psychologist who will help to bring back her normal state before any further interrogation by independence team.

We wouldn't be astonished to glean another update totally dissimilar from the prior averment.

In fact, the youths are demoralized and dejected here in Ghana due to how the higher authority impinging the media and many cases that sees it to expose the incompetency of the current government.

Many Ghanaians are now mislaying trust in the Ghana police and national security due to government interference in any matter that arises.