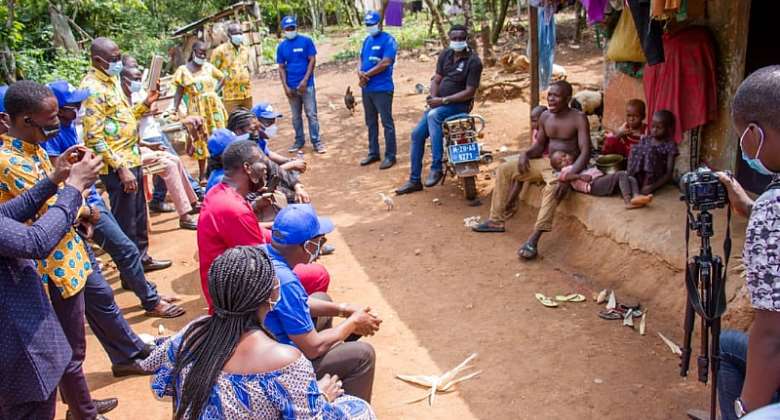 Ghana’s cocoa industry is under threat as the US Department of Labour reports a rise in child Labour cases despite government and industry efforts to curtail the practice.

The report found 1.56 million children engaged in hazardous work on Cocoa farms in Ghana and Ivory Coast. The Minister For Employment and Labour Relations, the International Labour Organization and Cocoa Industry actors have therefore visited some Cocoa Growing areas including the Bia West District to monitor the situation on the ground.

The day’s tour however showed that not so many children are involved in the menace as reported by the international community. While admitting that, there is much more to be done, Minister for Employment and Labour Relations Ignatius Baffour Awuah said most Child Labour reports are compiled by foreigners who do not appreciate the socio-cultural systems concerning work in the country.

He however admits that the country on her own does not have counterfigures to dispute the reports.

There exists a fine line between child labour and Child work. Ghana’s cultural beliefs accommodate a lot more than the international community tolerates when relative to children working on the farm. According to Officer in Charge ILO Ghana, Akua Ofori Asomadu, ‘ the advocacy is not against the abolishment of child work, which is children helping their parents. The emphasis is on Child labour. Child labour is any labour which is hazardous to child health, removes the child from school and reduces the dignity of the child’.

Global Cocoa buyers are gradually shying away from cocoa which has traces of Child labour. Ghana and Ivory Coast together produce about 60 per cent of the world’s cocoa- a major contributor to revenue streams of the two West African economies. More than 70 per cent of the cocoa produced in Ghana is exported to Europe and America. Any major rejection of the country’s cocoa beans by buyers will have manifest effects on the economy.

The government together with the International Labour Organization since 2003 has put together a national plan of action against Child Labour. ‘The plan brings together government, organized labour and social partners. This plan is a pragmatic step by step approach towards reducing Child labour.

As the Wor, this negative trend threatens Ghana’s Cocoa sales as the world gradually shies away from cocoa cultivated by children. The International Labour Organization, Ministry of Employment and Labour relations and cocoa industry actors have come to the Bia West District to monitor the progress made towards the elimination of Child Labour.

The two countries have for the past decade top the list of countries engaging children on cocoa farms. Child labour levels were found to be higher than in 2010 when industry and government agreed to reduce the worst forms of child labour in Ghana and Ivory Coast's cocoa sectors by 70 per cent by 2020.

As the world strives to eliminate Child Labour by the close of this year, a progress report is crucial. There exists a fine line between Child labour and Child Work. Ghana’s socio-cultural values accommodate a lot more than what the international community tolerates when it comes to child labour. Madam Akua Ofori Asomadu is the Officer In Charge, ILO Ghana. She noted that much more is expected to be done in the months ahead to curb the negative practice.

The two West African countries – which together produce about two-thirds of the world’s cocoa, had in the past questioned the methodology used in arriving at child labour figures in the two countries.

Ghana again questioned the data in the 2020 US Department Of Labour report. Whatever the case may be, the issue of Child Labour as reported major cocoa buyers threatens Ghana’s Cocoa sales. Increasingly, the world is becoming increasingly cautious of cocoa produced with traces of Child labour.