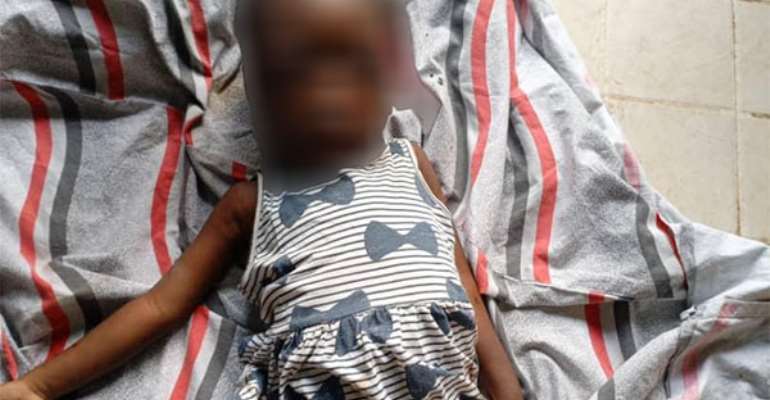 The Pokuase police have picked up a nursing mother for allegedly beating her three-year-old stepdaughter to death at Amamoley in the Ga West Municipality of Accra.

Suspect Esther Nyanteh was arrested upon investigations by the police on May 28, 2021, a day after the victim identified as Maadwoa died and the body deposited at the Nsawam Government Hospital.

The police have since moved the body to the Police Hospital Morgue for Autopsy to be carried out.

Police investigations indicate that on May 27, 2021, around 5 pm, one Bismark Sarpong alias Killer reported the death of his three-year-old daughter to the Oshuiman Police Post.

The police said the complainant allegedly told the police that the deceased, named Suzzy Sarpong, aka Maadwoa, died at home and the body had been deposited at the Nsawam Government Hospital.

“Later that same day around 8:50 pm, four neighbours led by the Nkoasohene of Amamoley also reported to the Pokuase Police that they heard about the death of the small girl and that they suspected that she died out of the numerous beatings meted out to her by the stepmother identified as Esther Nyanteh,” the police said.

The police said upon receipt of the complaint, they moved to Amamoley and met Esther Nyanteh but the deceased father bolted upon seeing the Police.

The police said suspect Esther Nyanteh was arrested and brought to the station and detained to assist with investigations.

DSP Efia Tenge, the Accra Regional Police Public Relations Officer, when contacted said Suspect Esther Nyantey, a nursing mother to an eight months old baby was cautioned on the offence of causing harm and detained but she was later released on bail pending investigations.

She said Bismark Sarpong, father of the deceased person later showed up at the station on Thursday, June 3, 2021, and was also arrested and charged with the offence of abetment of crime.

DSP Tenge said the biological mother of the deceased, Mavis Danso aka Ama Boagyewaah together with the deceased grandmother Adwoa Adomaah also arrived from Kumasi Effiduase.

“On Friday, June 4, 2021, police proceeded to Police mortuary together with biological mother, the grandmother, Nkoasohene for the coroner’s forms to be filed for a post mortem.

Suspect Esther Nyantey will be put before District Magistrate Court, Amasaman pending the outcome of the autopsy results to determine the proper charge for Esther Nyanteh.”