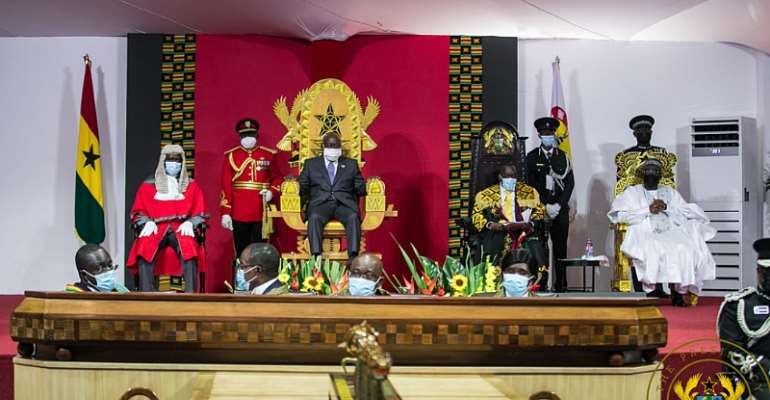 “We would normally associate party foot soldiers with riotous ballot-box snatching episodes. But when the best of our representatives showcase extreme rancor among themselves and sow seeds of doubt in the electoral process in such pugnacious, mendacious, vicious manner, the very survival of our democracy is threatened.”

So everything dishonorable, condemnable, despicable and reproachable about our elections played out in Ghana’s Parliament on the eve of the inauguration of the 8th Parliament.

The only disappointment about the confusion is that it took place on the floor of Parliament and we all had the dishonorable duty to watch the distinguished “honorables” slug it out in a free for all, commodious fisticuff that looked like a street brawl among opposing criminal gangs in a subway.

Call it the most shameful, egregious exhibition of partisan extremity, savage brutalization of free speech and the highest display of political uncivility and you would ever find in any legislature and you would not be far from the truth.

I am old enough to have witnessed some serious parliamentary shenanigans in various parliaments the world over, but nothing supersedes the formidable spectacle of a distinguished Member of Parliament snatching and dashing gallantly away with a ballot box he considers to be unfavorable to his party, and being chased, caught, and mercilessly pummeled to pulse by honorable blows from the chasing throng, before being subsequently forced to vomit chewed ballots from the inner chambers of his esophagus in split seconds to avert further drubbing!

We would normally associate party foot soldiers with riotous ballot-box snatching episodes. But when the best of our representatives showcase extreme rancor among themselves and sow seeds of doubt in the electoral process in such pugnacious, mendacious, vicious manner, the very survival of our democracy is threatened.

By the way, did you see how the lady MP was rudely shoved out of her seat by a fellow MP almost to the point of national embarrassment? And did you also observe how the rattled MP, the former Minister of Communications sought to hysterically correct the wrong and disgrace to her person by taking matters in her own hands by rendering instant justice to her adversary?

These are the honorable men and women of high repute, the veritable models of decent character Ghanaians queued for hours in the sun to vote for only a couple of weeks ago. To see our “honorables” exhibit such flippancy of behavior and frivolity of conduct so publicly is the lowest point of parliamentary ethics.

But truth be told, nothing surprises me in politics these days. Political mendacity and hooliganism, divisive behavior and violent conduct have become entrenched symbols of our national consciousness that I was least surprised to see armed men file into the floor of Parliament presumably to save the honorable Members of Parliament from themselves.

Nobody is surprised anymore when politicians scream at each other on radio or television in militant fashion in order to score cheap political points. We seem to associate the loudest and most militant sound bite with bravery and courage. Such is the depth of our apostasy that everyone wants to be a party hawk, to catch the eye of the President.

Maybe that’s how it should be. Who goes to battle with a dove?