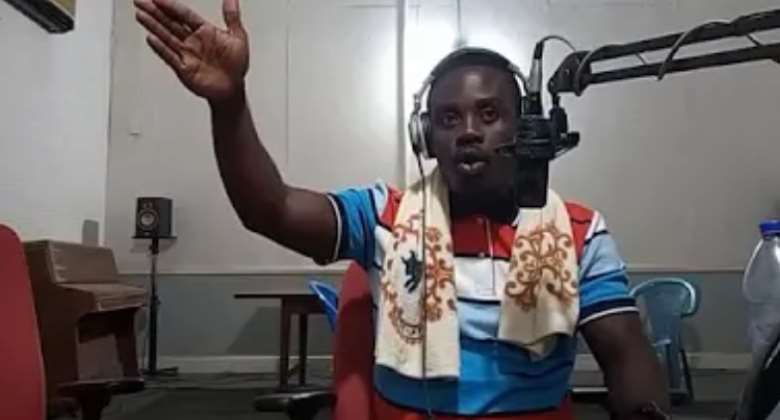 The Founder and leader of the Hands of God Power Ministry International, Osɔfo Emmanuel popularly known as Ogyam 1 says the increasing road accidents in Ghana during the month of December is beyond the physical.

He indicated that the evil spirits easily finds prey for drivers who engages in drunk driving.

According to him, most of the accidents are caused by spiritual manipulations.

He noted that, as the year is grinding to an end, all spirits are also congregating to have their final meetings to end the year. "There are spirits who are in charge of the roads, the sea, bridges, cemeteries and highways".

Ogyam 1 further explained that during the Christmas festivities spirits that operate on our roads would also be seeking human blood as sacrifice. "These are the things they also eat to feel happy and ecstatic and around this time is the most good times to get blood."

According to him, it is human blood that is most needed and the easiest way to get them is through road accidents.

He added that what helps the course of these evil spirits is drunk driving. "The spirits become happier when drivers drink alcohol and drive. When this happens, it is very easy for these spirits to attack such drivers to act in a way that causes accidents.

"They influence the driver by making him to sleep or sometimes cause a tree to suddenly appear in the middle of the road and the only person who sees that tree is the driver. In an attempt to avoid hitting the tree, the car veers of the road and run into a ditch. These are manipulations of evils spirits," says Osɔfo Emmanuel.

He added that, in some instances where a pregnant women is travelling among other passengers in a public transport and had been offered as sacrifice to one of the spirits in charge of the road. To kill that pregnant women means, it must cause an accident."

He explained that, in some situations, when someone curses somebody, "They say, I curse you and a car would kill you".

He continued, once that happens and that individual is in the car, then, the spirit whom that person was offered to must exact its pound of flesh, hence causing an accident.

"Once you're offered as a sacrifice to a spirit, that spirit monitors you".

The leader and founder of Hands of God Power Ministry International revealed that, most times, the accidents that happen isn't because all the passengers in the car have done something wrong, but because of the life of one person.

"Because of one person's life that is needed, an accident happens and sometimes tens of people would die".

He was speaking to D.C. Kwame Kwakye of GBC Radio Central region.