The Two Departed and the two Living Presidential Johns of the Fourth Republic of Ghana: My Thoughts Aloud 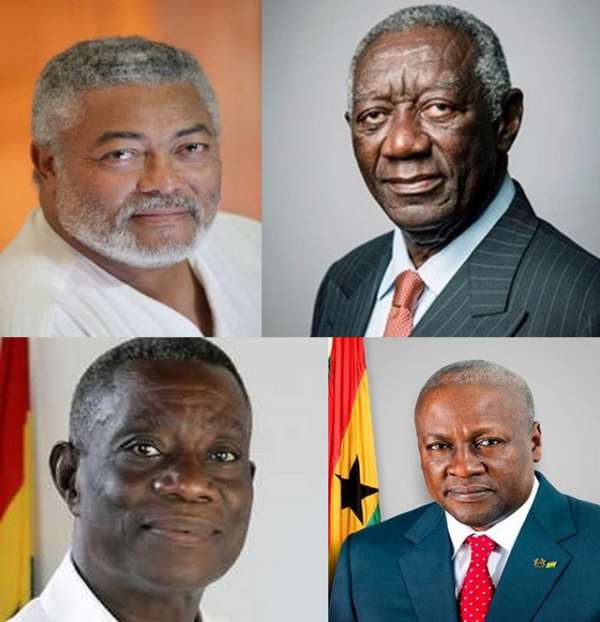 It is public knowledge that since the inception of Ghana’s Fourth Republic on January 7, 1993, four different personalities whose names are John became Presidents of Ghana in different periods and in close succession. These personalities are Jerry John Rawlings, John Agyekum Kuffour, John Evans Atta Mills and John Dramani Mahama. Unfortunately, two of the four presidential Johns of Ghana (John Evans Atta Mills and Jerry John Rawlings) died. Whereas John Atta Mills died in active service some eight years ago (July 24, 2012), Jerry John Rawlings died only yesterday (November 12, 2020). May their gentle souls rest in perfect peace. In this article, I have examined the four presidential Johns of the Fourth Republic of Ghana. I have examined them from the perspectives of fate, numerology and coincidence. The broad parameters of analysis are the departed Johns versus the living Johns.

As indicated in the introduction, Ghana has been presidentially led by four different persons called John. The first is Flt. Lt. Jerry John Rawlings who was a military Head of State for over a decade before becoming a democratically elected Head of State for eight consecutive years from 1993 to 2000. Then came President John Agyekum Kuffour who was President of Ghana from 2001 to 2008. President John Evans Atta Mills succeeded President Kuffuor from 2009 to July 2012 when he died in office as President. He did not finish his tenure before his demise. After the death of John Evans Atta Mills, his Vice President, John Dramani Mahama became a caretaker President, finishing the tenure of his late boss. Effectively, John Mahama became President from 2013 to 2016, serving his one legally mandated one term.

Sadly, two of the presidential Johns of Ghana died (John Evans Atta Mills and Jerry John Rawlings) while we are still fortunate to have another two alive (John Agyekum Kuffuor and John Mahama). May the Lord God bless them with good health, strength and long life.

The Four Presidential Johns, their dates of birth and other Factors of Interest

The oldest of the four presidential Johns is John Agyekum Kuffuor but he was the second John to have become President of Ghana. He was born on December 8, 1938. He is alive. The second John in terms of age but the third to have become President is John Evans Atta Mills. He was born on July 21, 1944. He died on July 24, 2012 (dying three days after his 68th birthday). He was born in July and died in July. Jerry John Rawlings who is the first presidential John followed John Mills in terms of age. Rawlings was born on June 22, 1947. He died only yesterday, November 12, 2020 as indicated earlier. Ghana’s “last baby” presidential John is John Dramani Mahama, born on November 29, 1958. He is alive and his 62nd birthday is loading.

Again, one of the departed Johns (Rawlings) did an eight year tenure or two terms in office whilst the other (Mills) did less than two terms in office. The living Johns have the same permutations. John Kuffuor did two terms of eight years in presidential office while John Mahama did less than two terms and currently hopeful of being elected for another term. Has God by numerology divided the presidential Johns for Ghana to send a message or it is a mere coincidence?

Again, one departed John (Mills) was older than the other departed John (Rawlings). They had about 3 years between them. Similarly, Kuffuor is older than Mahama but with 20 years. Why does nature keep differentiating the Johns remarkably and amazingly?

The two living Johns (Kuffuor and Mahama) once served the nation as Members of Parliament, Deputy Ministers and Ministers before becoming Presidents eventually. However, the two departed presidential Johns (Mills and Rawlings) did not hold those portfolios. A mere coincidence or fate at work? It appears as though Jerry John Rawlings is the overarching among the four presidential Johns, not only because of his long tenure of office but also because of the fact the other three Johns (Kuffuor, Mills and Mahama) once served in subordinate political positions under J.J. Rawlings.

Again, the two departed presidential Johns (Mills and Rawlings) hailed from the coastal areas of the country (Ekumfi Otuam and Dzelukofe respectively) while the two living Johns did not come from coastal areas. John Kuffuor is from Kumasi (middle belt) while John Mahama is from Bole (northern part of the country). It is a matter of the coastal Johns versus the landlocked Johns.

It is also striking to note that two of the presidential Johns (Kuffuor and Mills) were lawyers whereas Rawlings and Mahama did not practise the legal profession. One lawyer John (Mills) and one non-lawyer John (Rawlings) are deceased. Between the two living Johns, one (Kuffuor) is a lawyer by profession but the other (Mahama) is not.

Whether by fate, numerology or coincidence, Ghana has had very fine and hardworking four Johns who once wielded power as President and these four Johns share both differences and similarities. The ultimate similarity was that they were Presidents and Ghana-centric despite their flaws. It is very unfortunate that cruel death has snatched two of the Johns away from us when we least expected their demise. By their deeds while in office, it is as though the two departed presidential Johns (Mills and Rawlings) sought to borrow words from the lips of Etienne de-Grellett and said, “I shall pass this way but once; any good that I can do or any kindness I can show to any human being, let me do it now. Let me not defer nor neglect it, for I shall not pass this way again.”

Their death is painful despite the good counsel of the inevitability of death that we have learnt from the Shakespearean Gertrude who reminded her son Hamlet “All that lives must die, passing through nature to eternity.” This assertion by William Shakespeare resonates with the Biblical verse that reminds us that our mortal bodies will return to dust and our souls to our Maker- the Lord God. The patriarchal Abraham, father of faith, also told us that we are nothing but ashes and dust before God. Kudos to the four presidential Johns of our Republic and fare thee well John Mills and John Rawlings. Sleep in perfect peace until we meet at the resurrection.

Blame Victor Gbeho for not being involved in Rawlings' funer...
24 minutes ago