Why Ghana Should Address The Western Togoland Issue Now 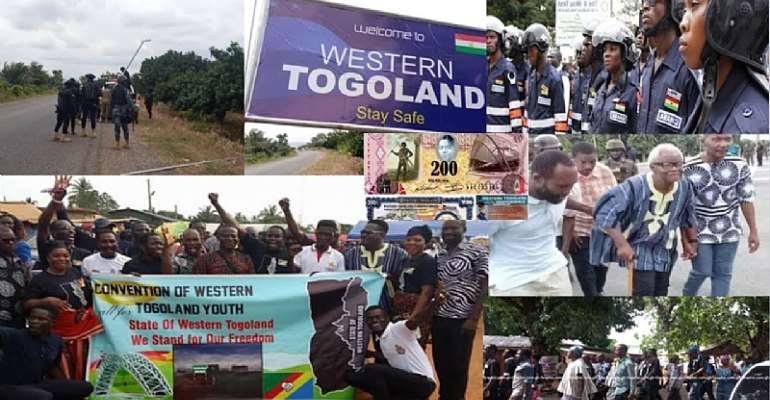 The ongoing secessionist movement led by the Western Togoland Restoration Front (WTRF) in the Volta Region of Ghana, although considered innocuous by the country’s leadership, has the potential of sowing the seed of destabilization in the region for many years. If the methods they employ are crude and basic, the success of their calculated attacks on the Ghanaian transportation system and the regional police stations tells the trained eye that these secessionists have a motive and opportunity and if they acquire substantial means, they could destabilize the entire region.

The secessionist narrative designed to feed off the sentiment that the Western Togoland (Volta Region) was an independent state at the time of the 1956 plebiscite can create a lasting divide and be a source of recurring conflict. In the present moment everyone’s attention is rightly focused on fighting the coronavirus pandemic. Additionally, most Ghanaians are focused on the upcoming November U.S. presidential elections and December Ghanaian presidential and parliamentary elections.

With all these issues competing for limited attention, this article seeks to present a clear and concise analysis of the gravity of the situation, how the group is evolving, and options available to Ghana to maintain stability.

When the Western Togoland Restoration Front declared part of eastern Ghana as an independent state in September 2020, as a Ghanaian-born American, from afar I watched events in disbelief. I was surprised at the muted response and completely nonchalant way Ghanaians reacted to that development. In that declaration, the secessionists stated their intent: they are a separatist insurgency seeking to carve out part of Ghana to form a new independent country. Security experts should therefore take this simple but clear fact seriously when analyzing the Western Togoland situation. Although their size may be small now and their methods amateurish, Ghanaians will be making a grave mistake if they laugh off the WTRF as a “joke.”

It is very possible, with everyone focused on COVID-19 and the elections, that these separatists could continue their series of attacks, make some gains against the Ghanaian security forces, and spread their narrative. The government should treat WTRF at the very least as a national security risk and deal with the situation now before it becomes an existential threat.

Ghanaians must view success in this struggle as the ability to maintain full sovereignty of the country while addressing the salient needs of the people in the Volta region. This requires the government to act quickly and comprehensively. The president of Ghana, Nana Akuffo Addo, must be at the forefront of this effort. He is rightly placed to present a single unifying message. The unity message will succeed if it is persuasive enough to dominate the narrative in the traditional and social media.

With the Ghanaian police force already on the ground, it numbers should be strengthened to effectively lead the security arm of the counterinsurgency operation while being supported by the Ghana Armed Forces. The aim should be protecting the security of the people. Therefore, proper intelligence gathering now will help separate the WTRF members from the local people when legitimate force is being used. It is in the interest of Ghana to prevent the WTRF from establishing “no-go” areas. Moreover, the police must control the region to protect the security of the people. Furthermore, any comprehensive approach should include some terms of amnesty and reintegration offered to the successionists.

The aim of WTRF is to control the people and resources in the Volta region. By attacking public facilities and police stations, they seek to destroy the government’s ability to provide public service and maintain security in the region. If innocent people are affected when security forces go after WTRF it will feed the separatist propaganda. They will spread such images through social media to drive national and international condemnation of the government forces. On the other hand, if the government fails to act and the separatists manage to destabilize the region, they will seek to present themselves to the local people as a viable alternative to an otherwise impotent or indifferent government.

A careful look at how the group has morphed over time gives another important perspective. Since 2017, the succession narrative has been in the public dialogue. The group have been organized along traditional tribal lines in the region under the leadership of Charles Kormi Kudzordzi. A political arm was formed to conduct feasibility study on the potential of breaking away from Ghana. Events in September 2020 show the military wing of the group is now engaging in an open insurgency. In their narrative, they stress a common history, tribe, and regional identify. They cast the government of Ghana as an occupier. Additionally, they claim to be recruiting and training people outside the region. Finally, their leadership claims to have support from outside sources and are developing logistics pipelines.

Nevertheless, the government can intervene now and succeed. However, it will require first acknowledging this as a national security threat and taking necessary actions. The December elections remain the focus for the country now. However, the Ghana police service which has participated in numerous United Nations peace keeping operations has the tactical proficiency to handle conflicts like these. Moreover, the professionalism, loyalty, and political neutrality of the entire security apparatus create the legitimacy required to prevent destabilization in the Volta region.

The key to stability is an early and decisive action by the government. Any protracted conflict will draw external support for the separatists, increasing violence, and prolonging the conflict into a Biafra-style civil war.

Historically, prolonged conflict devastates local population. Ghana has been relatively peaceful in its recent history. Although there was a struggle to gain independence, the Ghanaian experience was relatively peaceful compared to that of many African countries. Kenyans can recall the bloody struggle between the Mau Mau vs. the British (1952-1956). Angolans remember the Popular Movement for the Liberation of Angola (MPLA) vs. Portugal (1961-1974). Guinea-Bissau remembers the independence struggle vs. Portugal (1963-1974). Zimbabwe African People Union (ZAPU) and Zimbabwe African National Union (ZANU) vs. Rhodesia (1974-1980). Finally, Nigerians still remember the Biafra war.

With no history of such protracted and destabilizing struggles, the average Ghanaian is detached from the true impact of the Western Togoland secession movement. To keep Ghana peaceful, this insurgency must end. Ghana has come so far to descend into armed conflict.

The government must understand that this is a political struggle. The separatists seek to occupy parts of Ghana. Because this is a political struggle, it cannot be won only with the security forces. The government should have a coherent narrative on why the sovereignty of Ghana is important and what outcome they seek to achieve. Ghana is a strong country and can legitimately provide for and protect the people in the Volta region. But with prolonged conflict that can erode. It should be clear that the separatists do not have to win against the Ghana security forces, they seek to destroy the political will of the government to act in that region.

The Security forces approach should be predicated on the outcome Ghana seeks to achieve. Two viable options are either to destroy the insurgent fighters and infrastructure, or to establish security for the people in the region. A swift and effective government response now will lead to the decline of WTRF and reestablish security in the region. If the government fails to act now and an ensuing conflict emerges, there is a possibility it could last for a long time.

Intelligence gathering is paramount at this state. This will allow the government to selectively pursue the separatists, prevent overreaction, isolated the local population, cut off WTRF’s support and supply systems.

As stated before, there are only three possible outcomes to the Western Togoland conflict: Either the separatists will win a fully independent state, the separatists will win some form of a negotiated settlement, or the government of Ghana will prevail and maintain sovereignty and security within its existing borders. However, if the current conflict deteriorates into open hostilities Ghanaians should expect multiple years if not decades of destruction.

Imagine the lives that would be lost and the destruction of peace, property, and development during those years of protracted conflict. Imagine again how this conflict could sow a deeper seed of discontent that never stops but remerges again and again in the Volta region of Ghana. A comprehensive approach from the government of Ghana centered on intelligence, a persuasive narrative, and the joint police and military operation could effectively resolve this conflict and maintain the sovereignty of Ghana. The time to act is now.

The views expressed is this article are those of the author, Samuel Adjei, who studied in Ghana, the United Kingdom, and the United States. He currently lives in California, US.