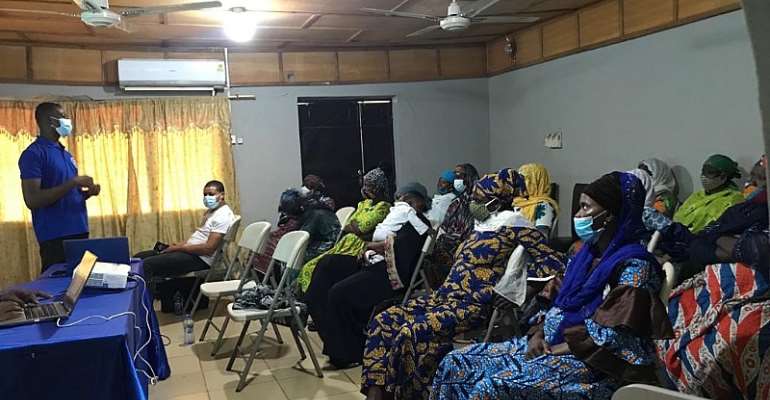 The first 1,000 days in every child’s life is a very critical period for growth and development. During this period, the demand for essential micronutrients is usually very high for organ formation and the health of the mother. However, a recent nutrition data analysis in the Sagnarigu Municipality in the Northern region of Ghana revealed that Sagnarigu has the highest percentage for stunted children in the Northern Region with 47.6% as well as children underweight with 31%. (USAID METSS Survey, 2017).

The underlying causes of this include inadequate access to nutritious food, inadequate care for children and women and an unhealthy environment. This results in inadequate dietary intake and/or diseases leading to malnutrition . The pregnant and breastfeeding women and women of reproductive age in general, as well as children below 2 years, are most at risk of malnutrition due to their high nutrient requirements.

Savana Signatures with support from the United Nations World Food Programme (WFP) in Ghana, through the DSM grant, has begun the implementation of Social and Behaviour Change Communication (SBCC) activities in the Sagnarigu Municipal area of Ghana’s Northern region. The goal is to contribute to increasing the purchase and consumption of nutritious foods (fortified foods which are mixed with extra vitamins and minerals, and locally available nutritious foods) while influencing behaviour positively for improved dietary intake and nutrition.

As part of the project strategies, Savana Signatures liaised with the Municipal Education and Health Services to train SHEP Coordinators and Health Teachers in Senior High schools in the Municipal on the promotion of purchase and consumption foods (fortified and locally available nutritious foods). The capacity of Support Group Leaders (mother-to-mother support groups) has also been strengthened to enable them effectively provide counselling and support to their fellow women and caregivers of children in their communities on the importance of consuming nutritious foods. The 2-day training was organized in Tamale to influence behavioural change among adolescents, pregnant and nursing and the community at large.

In a presentation during the training, Ambrose Mwinpuo, a Senior Public Health Nutritionist at The King's Medical Centre Tamale, indicated that a diet that is not diversified will result in inadequate nutrients intake leading to undernutrition particularly among Pregnant and Lactating Women (PLW) and children under 2 years.

He also noted that most individuals especially pregnant and lactating women, adolescents and children under 2 years are unable to meet their daily nutrient requirement as a result of access. The WFP Fill the Nutrient Gap (FNG) analysis reported that it is relatively expensive for most people in Ghana especially the adolescent girl to meet her daily nutrient requirement and fortified foods reduce the cost. Lola Milk Biscuit, for instance, was found to reduce the cost of the Nutritious diet of lactating women by 17% ( https://docs.wfp.org/api/documents/WFP-0000023267/download/ ).

The resource person also opined that the consumption pattern or preferences of the population is shifting towards processed foods and at an accelerated rate and people should not just buy and eat any processed food but the ones that are nutritious and fortified like the ones with the Obaasima Seal.

He introduced participants to Specialised Nutritious Foods (SNFs) such as Maizoya, GrowNut and KOKOplus being used on the WFP nutrition programme to prevent the occurrence of stunting. These foods have been milled, blended, pre-cooked by extrusion or roasting and fortified with a wide range of essential vitamins and minerals such Vitamin A, B Vitamins, Iron, Iodine, Folate, Zinc amongst others, to improve its nutrient content for improved nutrition.

Participants were guided to design an action plan that would guide them in carrying out their SBCC activities. The SHEP Coordinators and Head Teachers would sensitize their colleague Teachers, kitchen staff and students in their respective schools on the need to consume nutritious foods. The women leaders in the Municipal will counsel fellow women and caregivers of children in their communities on the importance of consuming nutritious foods.

The mother-to-mother support groups will be supported with video materials to engage the larger community members on fortified and locally available nutritious foods.

Linda Amoah, the Northern Regional Girl-Child Education Officer opined at the end of the training that the training was insightful. I wouldnt have forgiven myself if I hadnt come for this training, she said.

Participants were enthused, and many said the training was an eye-opener to them and they have seen now the need to feed their families with nutritious foods as well as to campaign for attitudinal change towards the consumption of fortified and locally available nutritious foods in the Sagnarigu Municipality.

Written by: Edward A. Ken-Zorre