Who will speak for the Katamanto seller? –Demolitions and Ethical Land Use in Ghana 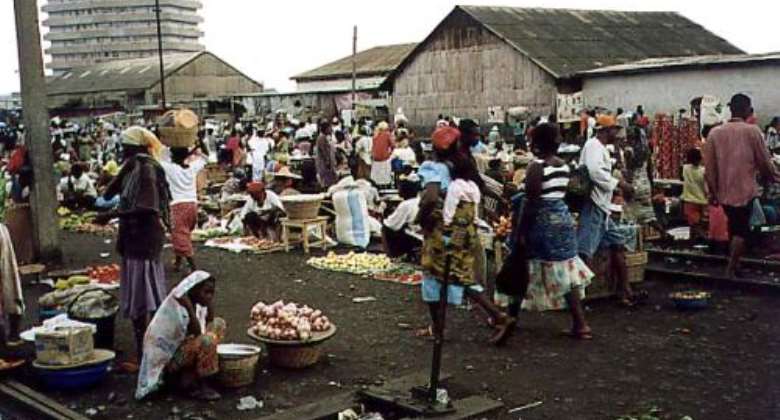 The demolition of some parts of the popular Katamanto market in the central business district of Accra has brought to attention issues of land –rezoning, ejections and land use in Ghana. Many decisions of government and other social institutions have often left citizens and observers baffled as in one breadth these same bodies preach pro poor messages whiles on the other hand implementation and action is a far cry from these bud watering promises that have often led them to the glorious corridors of power and authority.

Drawing mostly from his classical piece Ethical Land Use- Principles of Planning and Policy by Timothy Beatley, it is important to consider the issue of the demolition of the stalls in Kantamanto, and other issues regarding the demolition of settlements and commercial areas, the building on new ones and the dicey issue of ethical land use in Ghana, vis a vis creating a sustainable livelihood for the scores of poor people who may only be trying to make a descent living for themselves.

It is my view that ethical land use in Ghana should not only be influenced by modernization, developmental and policy rules but indeed moral, humanitarian and poverty alleviating reasons. Granted. The New Patriotic Party says it does not believe in creating a better Ghana by poverty alleviation but rather wealth creation. But is this a justifiable reason for kicking out people who have entrusted governance in their hands based on the creation of a better life as a quid pro quo? Wealth when created must be redistributed equally. Wasn't that the whole philosophy behind the “whe wasetena mu na to aba” message during the NPP campaign? My thoughts are that Ghana is becoming so intrinsically and sharply stratified on economic and standard of living index so much so that it is one of the high risk factors that is generating the get rich quick syndrome which is reason for all the kind of illegal wealth acquisition modes we know of.

Back to the issue of land use, should government be concerned with what happens to traders who loose their means of living through this recent market demolition? Do we have ethical obligations as a society, as a community to these land that have for so many years served as a thriving place of business to so many people who have come to the capital in search of a new life and better standards of living? How much of obligation or responsibility should Bremark Ventures Limited take in this particular case? Should the developer involved consider his obligation even when permits have been received from all relevant local, governmental and metropolitan agencies such as the Accra Metropolitan Authority (AMA) and how much personal sacrifice must be incurred? News reports capture many of the affected people mostly single parents complaining of having been deprived of their means of livelihood and methods of looking after their children. Should Bremark Ventures after a careful ethical soul searching have sought for another site to build the various stores that they so badly want to build? After all Accra is a growing city with many residents who will gladly welcome the idea of not having to travel all the way to the central business district in order to buy goods that they need. Indeed problems of traffic and accessibility to market places will be solved if the developer had indeed chosen another convenient area to relocate his stores. We recall how early this year over hundred residents of Santeo-Kanawu near Ashaiman in the Tema municipality had been rendered homeless due to a demolition exercise carried out by the Tema Development Cooperation (TDC).
The displaced residents who had to move their properties under trees while the rest were buried under the debris had no option than to use the classrooms of the Agape Preparatory School nearby and the auditorium of a mosque as their sleeping places for some nights. According to them, TDC did not issue any warning before demolishing the buildings numbering about 50. Shouldn't the utilitarian view of maximizing good, requiring that in decisions like this the utilitarian view which requires the greatest good for the greatest number of people be pursued in such instances? Sometimes such decisions have led to sectarian violence and conflict in other parts of the world.

Consider for instance that Muslims in the Asawase community in Kumasi were ordered to move based on a decision by the Control Office of the Kumasi Metropolitan Assembly (KMA) to re-zone the area currently being occupied by Nurul Ameen Islamic School as an electricity sub-station for the Electricity Company of Ghana (ECG), earlier in the year. We all know that Zongos represent more than just living settings for people in Ghana. They have religious and cultural ascriptions. What if residents in these areas saw it as a move prejudicial to them as a religious group? Can one imagine the ethical and conflict prone aspects of a possible decision by the government to demolish all Zongos in the country? Should education for the nation's citizens be considered over and above the provision of electricity for an entire community some of whom wouldn't use it because they cannot pay the bills? We all know that Zongo schools are usually cheaper than others in the cities. Would the children affected be able to afford other schools if they were moved?

What about the ethical responsibilities of the professionals involved in these projects. Officials of the various metropolitan assemblies, the Lands Commission, Ghana Railway Authority, Ghana Commercial Bank, the architect and planners involved in some of these cases as well as the engineers all have a role to play in reducing the social burden that removing low income residents from their places of residence will bring. Do these bodies have a persona and professional obligation to walk away from such projects if they feel that the result of such a demolition exercise is somewhat immoral?

Consider the decision by the Central Regional Security Council (RESEC), in February this year who issued an ultimatum to traders and corporate bodies that had defied repeated appeals to quit the Kasoa old market and relocate at the new Kasoa market complex. The Council had advised traders and companies that have conducted business at the Kasoa old market to remove all their property from the market before the deadline.
They maintained that the continued operation of the old market was not only a hindrance to the progress of the new multi-billion cedi market complex at Kasoa, but also that it did not augur well for the Accra-Cape Coast-Takoradi international highway, which was very close to the old market.
Are these fair reasons to deprive poor people of a trade or is it better to consider the distributive effects of these policies and seek for alternatives. If the hospitals are built these poor people will not be able to receive medical attention from them anyway. The new stalls are being sold at very expensive prices which many of them cannot buy and again the international highway will be used by people who hardly care about the lives of the people whose means of sustenance will be affected by the road.

On the other hand some may argue and fairly convincingly that ethical judgment should be made at a public or collective level. That when for instance decisions are being made about the relocation of the new kasoa market or the demolition of parts of the Katamanto market, elected officials should have acknowledged the problems that these presented before granting such permits. Isn't it the responsibility of these agencies to providing other convenient places of business for those who will be affected by any such demolitions? This brings about the growing need for a more proactive core of Planners in Ghana who are also willing to embark on some amount of advocacy planning. Planners who will not only be willing to respond to the changes that take place in our communities but will indeed anticipate such happenings and respond to them effectively by rising up and speaking for poor and powerless people who have no chance of voting in the metropolitan and assembly councils. It is my view that the AMA, ministry of local government, the regional ministry, architects and planners have not been a dominant influence in shaping this country's cities. This has given developers and people with an overly profit oriented ambition a field day to the detriment of the suffering masses.

Who is responsible for the cities that we build in our country? I do not pretend to know the answer. However everyone, politicians, planners, developers, business people, district, metropolitan and unit assemblies as well as architects and other landscape professionals all have a role to play. Whiles I am not advocating for a chaotic and slum infested city, I believe that there should be in society people who's responsibility it is to “represent the public interest and the generations yet unborn. To give political voice to the poor and powerless. To provide a balance to the power of the rich and influential to create a just and humane society” (Pieser). Planners and advocates must do more as neutral analysts and arbiters, the voice of disinterested reason among political factions (Johnson, 1989). Then can we develop not only human oriented cities, but indeed towns and settlements for the large number of Ghanaians for whom housing, access to land and land use both as a commercial enterprise and non commercial domain shall bring exponential benefits.