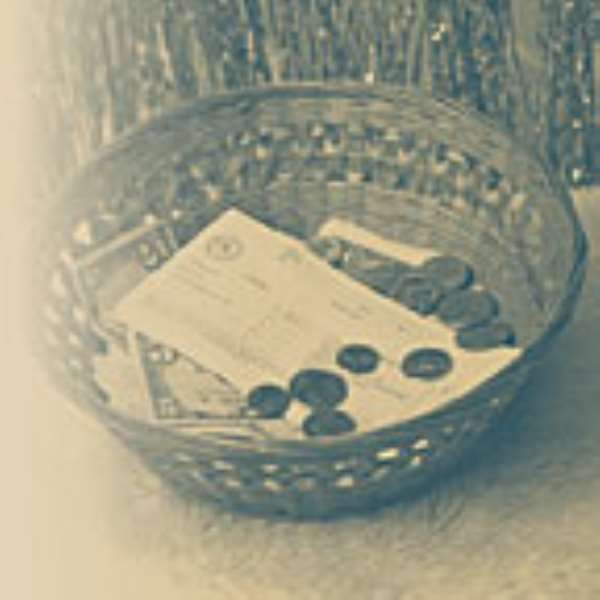 The controversial debate over whether Christians, under the doctrine of the Bible are obliged to pay a tenth of their earnings as 'Tithe' in Churches, has sent Men of God clashing over the subject, considered by millions to be one of the thorniest issue in Christendom which threatens to tear the faith in diverse ways.

Following the most recent outburst by a little known 'Man of God' from a little known church, condemning the practice and generating a huge debate on the worldwide web in the process, one of the most consistent critics of Tithing as an obligatory act required of every true Christian, repeated his condemnation in an interview with this reporter last week.
Brother Dan Owusu Asiamah, a Missionary of the Churches of Christ based in Takoradi and once the host of Church of Christ TV programme dubbed 'Voice of the Church' on Metropolitan TV, was emphatic that the practice went with the last marine.

Two Orthodox Church leaders, The Vicar General of the Catholic Church, Rt. Rev Eric Awortwe Dadson and the Synod Secretary of the Methodist Church, Rev Daniel De-graft Grace, said in separate interviews with The Chronicle that they saw nothing biblically wrong with the collection of Tithe in Churches.

Bro. Owusu Asiamah, as he would want to be called, said “it is a fraudulent act on the part of Ministers of God under the doctrine of the Bible to collect Tithe from church members.”

To the Vicar General, the Catholic Church does not condemn the payment of Tithe because it was an injunction on the part of Christians to honour this biblical obligation.

According to him, the word 'Tithe' was mentioned about 46 times in the Bible implying that it had Biblical support adding, “the Catholic Church has been collecting the Tithe and contributing a portion of it for purposes of religion and charity.” Giving scriptural support such as Ecclesiastics 11:1, Matthew 6: 19-21 and Luke 6:28 to buttress his argument, he noted that, “Every Catholic is bound to contribute to support the Church or see it as a duty to support the Church, observing, “Spiritually, it is a blessing”.

When this paper drew his attention to the issue of other Men of God using the same Biblical doctrine but condemning Tithing, he responded that it all depend on one's ability to interpret the Bible adding that others do it to suit their own interests while others too, according to him, may not know at all.

According to the Synod Secretary of the Methodist Church, Rev. Daniel De-graft Grace, the Methodist Church does not also frown on Tithing because it has scriptural backing and that the Church could not bar its congregation from honouring what the scripture required of them.

“We believe in the Bible and we do not have a problem as far as Tithing is concerned because we have to do just what the Bible says about Tithing”.

Using Malachi 3:7 and Matthew 23:23 to buttress his arguments, he told this paper in the interview that the above scriptures implied that it was an injunction on Christians to honour their Tithe obligation to the Lord Almighty. He said Jesus did not actually dwell so much on Tithing because the Jews at the time, understood the role they had to play in respect of Tithing.

“We see the result of paying Tithe and therefore would not do anything to prevent someone from receiving their blessing by debarring them from paying their Tithe,” he said.

But in spite of the arguments of the other Church leaders, Brother Dan Owusu Asiamah of the Churches of Christ, arguing with biblical support, told this paper in an exclusive interview that Ministers of God collecting Tithe in our present age knew very well that they were perverting the word of God to suit their own selfish interest and as such would account for their stewardship to God one day.

According to him, “it is not just a sin to pay or collect Tithe but also a spiritual '419' adopted by Men of God to defraud their congregation”.

To this end, he called for an open debate on the topic to settle the issue of whether Christians were under any law to pay Tithe in our present-day Churches.

Buttressing his arguments with spiritual quotations like Acts 2: 42, Gal. 1:13, 5:4, 4:5, Col2: 14, 1Tim6: 10 and 2Tim 2:15, he told this paper that what most Ministers had failed to learn and know was the fact that there was a vast difference between the Old Testament and the New Testament.

He pointed out that even in the Old Testament, the Levites, who were ordained to collect Tithe and had their role defined by God, did not collect Tithe in monetary terms.

Besides this, he noted that they did not collect the Tithe on monthly basis but rather on yearly basis and this to him, represented a big difference between Tithing in the Bible and what 'latter day pastors' collect nowadays.

To this end, he has dared Churches and Ministers of the Gospel who collect Tithe, to show with examples in the Bible, how the once renowned Apostles like Paul and Peter of the early Church, collected Tithe or received Tithe from the Churches at the time.

What is more, the Churches of Christ man said the manner in which Tithe were being collected in Churches today made it look more compulsory as against the Biblical doctrine which allows every Christian to give freely based on one's will. He told The Chronicle however that though Christians were not under obligation or law to pay Tithe, it did not mean they were not supposed to give out money to the Church for other development projects.

On his part, the General Overseer of Jesus Healing Centre in Takoradi, Prophet Kingsley Nkrumah also condemned the continued collection if Tithe from Christians. According to the Prophet, the New Testament had repealed the Levitical Priesthood of the Old Testament that instituted the Tithe Law.

To him, Hebrew 7:7-10 clearly stipulated that Christians ought to give unto the Lord whole-heartedly not by force and that that is what the Tithe Law enjoins Christians to do.

According to Prophet Nkrumah, “ the Churches were aware of this in the Bible, but have deliberately made it a policy to extort money from innocent people by using the name of God. The Prophet had earlier granted an interview to The Heritage Newspaper last week on the same issue, which set off a bedlam round the world.

Of the 98 comments on the web, only 10 per cent of readers agreed with the Pastors who thought that it was Biblically right for tithe to be paid with the 90 per cent condemning it with harsh and insulting language.

One referred to the lifestyle of Duncan Williams of the Action Church and said that it was wrong for Pastors to live extravagantly and fly first class when the ordinary members of the congregation paid the tithes while expressing concerns that it was being misapplied.

Other popular 'Men of God' who institute Tithing under compulsion and actually punish defaulters include Reverend Sam Kuranchie Ankrah of the Ahenfie Church.

Dr. Mensah Otabil of the International Central Gospel Church is another proponent of the legitimacy of Tithing. Though he was said to have travelled out of the country and so could not be spoken to, a member of the Church who was interviewed said they could point to Central University, scholarships, and many more Church conferences and outreach programmes as examples of what funds paid voluntarily by members were used for.

Mr. Kofi Coomson, Publisher of this paper, said the recent $30 million to be spent on a hostel project that the Church has embarked upon, did not come from the GETFund or foreign charities, but from members investing prudently the monies paid as Tithes. He said people had choices and no one should be deluded into thinking that Tithing was a martial law.

“Jesus is a democrat, he gives people choices to sin or to abstain from sinning, to engage in sexual humping unprotected and reap the whirlwind of STDs or to abstain and stay safe, to pay Tithes and offerings and 'feel' fulfilled or not to pay and feel okay if your child attends Central University even if you did not contribute in any way.

Indeed the Vice Chancellor of Central University is not even a Member of the Church. Professor Gadzekpo attends Mystery School with my brother who also has different beliefs. Its their choice”, said Kofi.