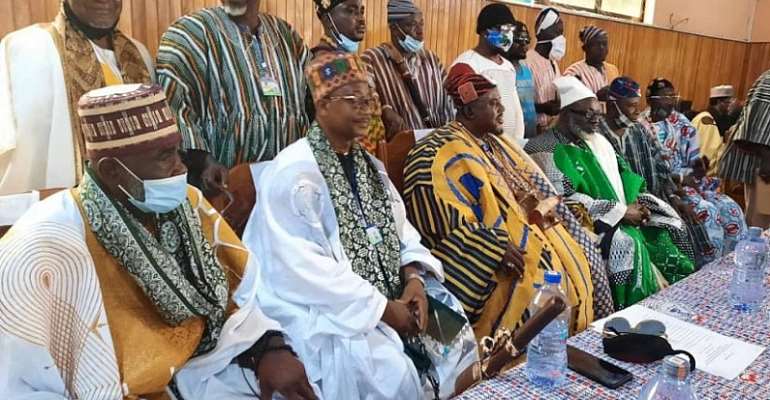 Yaa-Naa Mahama Abukari II, the Overlord of Dagbon, has urged political rivalries to conduct issue-based campaign in the upcoming election to enable the electorate to know what they stand for.

He also urged the media to offer fair opportunities to all political parties to share their messages with the public to inform their choices.

He said this was necessary to ensure peace and grow the country’s democracy.

Yaa-Naa Abukari II said this in a speech read on his behalf by Nanton-Naa (Paramount Chief of Nanton) Mahamadu Bawa, at a national conference of Muslim Kings, the Paramount Chiefs and Imams held in Tamale on Saturday, August 8.

The meeting, organised by the Interim Committee for the Organisation of National Conference of Muslim Kings, Paramount Chiefs and Imams, was to share ideas and plan for the development of their communities.

It was attended by many leaders from Muslim communities, representatives of Chiefs from Dagbon, Mamprugu, and Gonja Wa, among others.

Yaa-Naa advised Muslim leaders to impress on the youth in their communities not to be misled to foment trouble as part of the elections, saying the time has come to disassociate Muslim youth from violence.

He was happy at the organisation of the conference and expressed the hope that the conference would help to erase negative perceptions about Muslims generally and Muslim youth in particular in the country.

Sheik Dr Hussein Zakariah, an Islamic Scholar, expressed the need for Muslim chiefs not to abandon their roles as leaders in their communities, saying they needed to combine such roles with their traditional functions to assert their authority in their communities.

Chief Dr Mohammed Sungtaba, the President of Inner City Tribal Chiefs, called on indigenes at inner cities to fight for their rights and assume leadership positions.