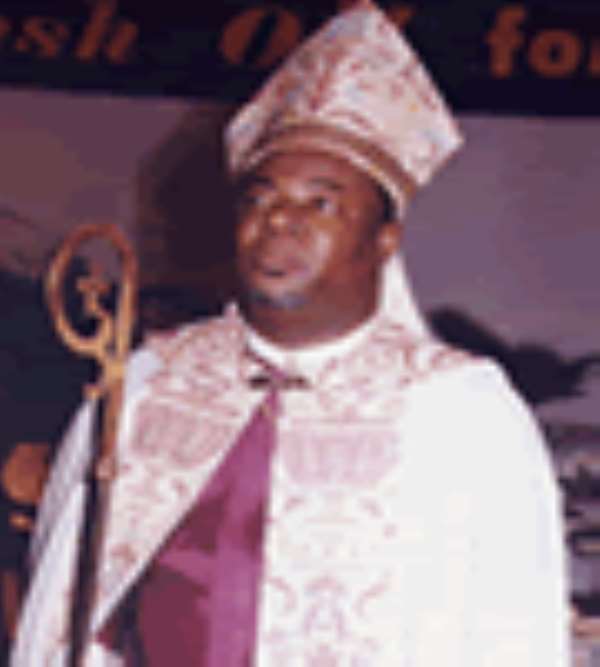 Baring It All
A transcript of Elsie & Francesca Duncan Williams' interview about their parents predicament.

Two daughters of Archbishop Nicholas Duncan Williams and his wife Francisca shocked the world last week with the revelation which actually was a confirmation of already known rumours that their parent's disagreement has gone beyond repairs. Among others, Elsie and her kid sister Francesca supported their dad's decision to divorce their mum, explaining that she has done enough to hurt her husband and the kids.

Speaking to Accra-based Joy 99.7FM, the two kids also revealed that their mum knows that the marriage will never work, but wants to stay in because of the prestige of being the Archbishop's wife and also because of the money.

The Duncan Williams family, your dad & mum have more often than not been in the news for the bad reasons. The last few weeks has seen a return to this situation. How are you and your siblings coping with this media attention?

Well, first of all, to respond to the articles they are absolutely false and thank you for the opportunity to set the records straight. You should understand that the articles were written by one person, Kofi Coomson who has had a long standing vendetta against my father and his ministry. And in the article, they said that my dad sent my mum to London without her having any knowledge of the court proceedings. Infact she very well knew about the date, the date was jointly determined by both my dad and my mum's attorneys. The date was discussed with my mum, and infact my dad asked her when she asked to leave for London to postpone her trip, and there are several witnesses to that. So it was my mum's idea and she knew about the date. I was in Ghana when she wanted to leave for London. Definitely, the information in those articles is not the truth. So I wanted to start with that first.

For all those who have followed the marital problems of your mum & dad, there have been lots of rumours about what occasioned it, what the real problem is. Help us, what seems to be the problem?

The problem is they've not been able to get along. My mum has had issues with the mission, and my dad has really tried for a long time to get the marriage work. When she went ahead with the first divorce, and when they came back, my dad asked for them to go for counseling and several of the things that she promised to do in front of all of us and the children none of those things happened, which escalated the problems they had before the first divorce and that's what led it to this point.

At this point, your dad is pushing for a divorce and we understand your mum wants to stay in the marriage, what do you as children make of your dad's decision.

Divorce is never easy, but we are witnesses to the fact that our dad did all that he could to save this marriage. Unlike the picture my mum is painting, the fact is that he has not been a functioning part of our family. When my sister and I were very young, she tried to pitch us to hate our dad. She insults him in our presence, such as idiot, she told us that our dad was a bush man who did not know anything and has attacked him on several occasions, in our presence. Our dad has, he has suffered for over fifteen (15) years. He has had to be both father and mother to all his children because our mum was just not present to fulfill those duties.
We support the divorce because it is time for all our suffering to end so yes, we support our dad in his decision.

Why then will your mum, Mama Francisca want to work things out and bring the family together again?
She is very concerned about what the public thinks and how she looks. She needs to have that self-assurance and that confidence that she is the Archbishop's wife. That's what gives her respect because a lot of people who are close to her and know the type of person that she is, the people outside don't really know her and what commands that respect and gives her that reverence that people give her is because of the fact that she is married to my father. So, we believe as the children that, that is what is driving her to keep the marriage together which she knows has not worked for many years.
And also, the money aspect because my dad even though he takes care of her now that they've been separated for all the two years, she still will want to have money at her disposal. So, the fame of been the Archbishop's wife, also money behind her is what I believe and my siblings believe is making her to contest my dad with all these articles and all the lies that are been told about my dad.

The concern of many people is that the divorce been pushed by your dad has a lot of implications and people are asking how a man of God in spite of all these challenges you are saying can go ahead with something like that.

Well, the fact of the matter is, my mum also claims to be a woman of God but she divorced him the first time in 2001. I believe that my father is man of God but he's also a human being. The circumstances that we the family have been living through and especially the relationship that he had with my mum is what have pushed him to this point.
He can no longer be in an abusive relationship, he can't be in an emotional abusive relationship, and it's a lot for him. He can't have the ability to focus on God's role for his life if he continues to be in such a relationship.
Now, in 2001 before she divorced my dad, she had an affair with an ex-boyfriend and my dad forgave her about that and took her back after a couple of months when she couldn't get anybody else to marry her and she run out of money. So I don't think this is an issue of my dad just getting up and wanting a divorce. It has come to this, because there is no other way to handle it. There's no turning back for my mum with the way that she treats him, the way that she does not listen to his authority…

And that's where I'll want to hold it for a minute… now since they got back together what's been the relationship between them?

It's been crazy. There's always argument and she's always accusing him of one thing or the other. And all we see as children is my dad working night and day trying to provide a lifestyle for his wife and children that will make them comfortable and all she has to do is to always criticize him, tear him down emotionally and actually for the records, they have been separated for two years now.

What kind of mother has Mama Francisca been?

My dad has been both our father and our mother. Our mum is mostly like a figurehead. We don't have that type of relationship that we'll be able to go to her. WE love our mum, whatever childhood she had to behave this way, we don't blame her for that. The only thing is she hasn't really been there for us as a mum. We will probably have a better relationship with her if the lying and fake tears stopped because there is no trust here, there's no love here. Some of the information that was printed in that article came directly from her quarters.

Well Elsie, you are a woman yourself and like they say, women have needs. The Archbishop has been on the road all these years, obviously he has not been at home most of the time, in the air, building his church, probably he didn't give his wife the loving shoulder she requires, but she still wants to stay and make things happen. Maybe this is an issue of the challenges of his job that has brought the family to this extent, and may be you the kids should not be supporting your dad this much.

No, I disagree. My dad, he's moved around a lot but he's had several occasions that he's traveled with her for months. He took her on the road so they will be together. But all that happened on those trips were more arguments and more problems. So I don't think it's a problem because of his travels. I think that she just cannot submit to him and regard him as the man of God he is and the husband that God has given her. I think that will be the issue not my dad's travels. Even if he were gone for long, we've had Christmases, holidays, they've gone to Disney world, they've gone to England, Italy… there are several things that he has done with her but it just didn't turn out they way it was supposed to turn out because there was always arguments. She was doing one thing or another.

How have your two little brothers been coping and where have they been all this while?

They've been living with myself and my husband. We recently moved to Maryland and they are still with us. Joel is 16, and he knows a little of what's going on, and Daniel the 10 year old, we've sheltered him as much as we can. He does speak to my mum occasionally but it's also very hard for them because sometimes when they go to Sunday school, people ask them about their mum and they don't know what to say.

As this divorce is in the offing, who will now be the mother to you and your siblings. Is there another woman already in your dad's life with plans for remarriage?

Well, that is left up to my dad, but there is no woman that we know of, and the speculations about some woman lurking somewhere, I don't know who that woman is. We have a lot of supportive aunts and elderly women in the church who have come around to show their support to my dad and us the children. So, right now, there is no person lingering in the background and honestly we want both our parents to be happy. When my mother finds somebody she thinks she'll be happy with she has our blessing. God gave everybody freewill, and we want both of them to happy and fulfill what God has called them to do. That's just our prayer for them.