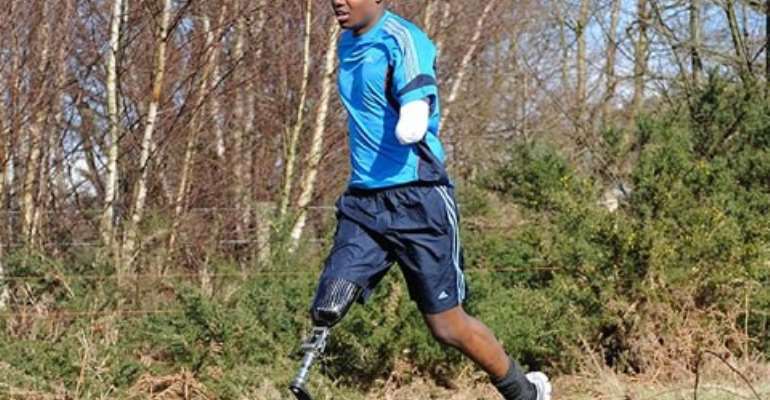 WAR hero Ben McBean is celebrating a moment he feared would never happen — getting down on one knee to propose to his girlfriend.

Despite the 24-year-old losing a leg and an arm in a Taliban landmine blast, he still wanted to pop the question to school friend Sophie Williams in the traditional way.

So Ben — dubbed a "true hero" by Prince Harry after they jetted back from Afghanistan together — valiantly got down into the awkward position at the plush Ritz Hotel in London last week.

Delighted ex-Marine Ben told The Sun: "I struggled to get down on one knee. It took about five minutes with the help of leaning on the bed.

"I don't have the bend in my right knee and was in so much pain that I just quickly asked her to marry me.

"I wanted it to go right. I wasn't planning to get down on one knee but I thought I'll only do it once.

"I've done harder things — I got blown up and lost my arm and leg and made myself walk again — so I can get down on one knee.

"It was worth a little bit of a struggle. I was a Royal Marine, I told myself, 'Just do it'."

Ben spoke movingly of his battle to rebuild his life after the blast in February 2008, and admitted there were times he thought he would never find love.

He said: "I think three years ago I was dying in a desert, two years ago I thought I would never meet a girl and a year-and-a-half ago things got so bad I thought my life was over.

"Now I'm engaged. It's fantastic, what an achievement. I'm not saying being blown up is a good thing but it's all turned out OK."

And he praised fiancée Sophie, 24, for helping to bring him back from the brink.

He added: "Before I met Sophie I wasn't exactly a stud. I'd got blown up, lost my arms and legs. I thought, 'This is it for me.'

"I started going out drinking because I had nothing else to do. Then I bumped into Sophie and it changed my life.

"I didn't think I'd ever meet a girl. I thought they would just feel sorry for me.

"I wasn't wanting to get attached to anyone because I didn't think they'd like me back."

The couple met in a bar in their home city of Plymouth in 2009.

They recognised each other immediately because they used to sit next to each other in maths class when they were teens at Lipson Community College.

They lost touch when Ben joined the Royal Marines and Sophie began serving in the Royal Navy.

Love-struck Sophie, now a personal trainer, admitted she "stalked" Ben for six months after they met, even turning up at his house in the middle of the night.

By August 2009 they were a couple and soon moved out of their parents' homes into a two-bedroom flat in the city.

Romantic Ben — who is now a motivational speaker at schools and businesses — popped the question after splashing out on a £650-a-night suite at The Ritz on Wednesday.

He slipped the £2,500 four princess-cut diamond engagement ring into Sophie's champagne glass when she wasn't looking and then got down on one knee.

Ben, who still keeps in touch with Prince Harry but isn't planning on inviting him to the wedding, said: "It's strange because I didn't fancy Sophie at school. She was like a mate. We were both terrible at maths.

"Only cool kids had girlfriends. I wasn't interested in girls, I just wanted to play football.

"But it's amazing because I only came back to Plymouth because I was injured and didn't have much to do so was going out boozing every night with my mates. One night I realised, 'That's Sophie from maths class.'

Quantcast
"I was in a group of five blokes and she was with five girls and we just got chatting. I thought she was really good-looking.

"We are like the same person, just male and female. I just didn't think, after the injuries, I'd ever even get a girlfriend."

Ex-Navy officer Sophie — who served in the Bahamas and United States — fell for brave Ben straight away.

She said: "I basically stalked him for six months. I did all the chasing. I used to hang around outside his front door after a night out.

"He was very reluctant at first. To be honest. I kept my eye out for him every time I went out.

"My friends teased me because I was always following him around town. I accidentally on purpose made sure I bumped into him.

"If he wasn't out in town, I would text him. And if he was at home having a night in I would go round to his house. I had to pursue him at first because all his barriers were up.

"But I fell for him really hard. I would wait outside his house, I was that into him."

So Sophie — who met Prince William when Ben took her to The Sun's military awards, the Millies, in 2009 — was delighted when he popped the question.

She said: "I didn't imagine he would be able to get on one knee. I was really impressed. He had a bit of a wobble but he got down with a helping hand from me.

"I pay no attention to his injuries. He's a normal person to me and I've been fine with his leg and arm since I first saw them. I'm proud of him.

"I feel really happy, I'm on cloud nine. It feels like we are in our own bubble."