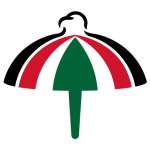 The National Democratic Congress (NDC) is a social democratic political party in Ghana, founded by Jerry John Rawlings, who was Head of State of Ghana from 1981 to 1993 and the President of Ghana from 1993 to 2001. Following the formation of the Provisional National Defence Council (PNDC) which ruled Ghana following the military coup d'état on 31 December 1981, there was pressure from the international community to restore democracy. The NDC was formed as the ruling party ahead of elections in 1992, in which Rawlings was elected President, and in 1996 Rawlings as re-elected as the NDC candidate. Rawlings' second term ended in 2001. The NDC lost the presidency in the 2000 election, and it was not until the 2008 election that they regained it with candidate John Atta Mills. The NDC's party symbol is an umbrella with an eagle's head on top. Party colors are red, white, green, and black. Internationally, the NDC is a member of the Progressive Alliance[1] and Socialist International.[2] On 9 December 2012, the Electoral Commission of Ghana declared NDC candidate John Dramani Mahama to be President-elect after a hotly contested race in which he won 50.7% of votes cast.[3] Electoral performance The NDC has contested all national elections since its inception. 2000 elections The 2000 election was the first presidential election since 1992 that an incumbent president was not on the ballot. John Rawlings' eight year tenure had expired as per the Constitution of Ghana. John Atta Mills became the Presidential Candidate of the National Democratic Congress at a special delegate congress help in Ho in the Volta Region of Ghana. He was popularly acclaimed the presidential candidate of the party for the 2000 presidential election. Vice-President. John Atta Mill lost in 2000 to New Patriotic Party's John Kufour after two rounds of voting. 2004 elections In the 2004 elections the party's manifesto called for "A Better Ghana".[4] John Atta Mills ran again for the NDC in the 2004 presidential elections, winning 44.6% of the vote, but losing to the New Patriotic Party. In the general elections held on 7 December 2004, the party won only 94 of the 230 seats. 2008 elections On 21 December 2006, Mills was overwhelmingly elected by the NDC as its candidate for the 2008 presidential election with a majority of 81.4%, or 1,362 votes. Ekwow Spio-Garbrah was second with 8.7% (146 votes), Alhaji Mahama Iddrisu was third with 8.2% (137 votes), and Eddie Annan was fourth with 1.7% (28 votes).[5] In April 2008, John Mahama was chosen as the party's vice-presidential candidate.[6] On 3 January 2009, Mills was certified as the victor of the 28 December 2008 run-off election and became the next president of Ghana.[7] 2012 transfer of power and elections President John Evans Attah Mills died, after a short illness, in the afternoon of 24 July 2012 while still in Office. John Dramani Mahama of the NDC, the vice-president, was sworn-in as president that evening.[8] The NDC picked John Dramani Mahama for their presidential candidate and sitting vice president Paa Kwesi Amissah-Arthur as their vice-presidential candidate for the 2012 elections. Governments formed Since the NDC was formed, it has formed two governments following elections, and a third following the death of President Mills. The list of governments is as follows: Rawlings government (1993–2001) Mills government (2009–2012) Mahama government (2012–2016)