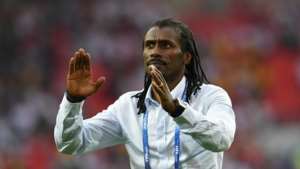 Head Coach for the Teranga Lions of Senegal, Aliou Cissé has applauded the performance of his team at the 2019 Africa Cup of Nations (AFCON) tournament despite failing to clinch the trophy.

The team progressed from Group C after finishing behind Algeria and coincidentally met the same team at the finals of the continental showdown on Friday, July 19, 2019.

At the end of a pulsating 90 minutes though, the result from the match between the two teams repeated itself in the grand finale with the Desert Foxes winning 1-0 at the Cairo International Stadium.

An early goal from Al Sadd striker Bagdad Bounedjah was the deciding factor to hand Algeria her second title in the history of the tournament.

Speaking in a post-match interview after missing out on winning Senegal’s first-ever continental trophy, Coach Aliou Cissé bemoaned missed chances on the night but lauded the performance of his teammates throughout this year’s tournament.

“We conceded early on and missed a few chances, the controlled the game in the second half yet we still failed to equalize. I congratulate Algeria on their title. We know our strength and our performance didn’t decline for this match”.

“Algeria took advantage of the chance they got to score and we didn’t take our chances. This is football. I would like to thank my team on the effort throughout the tournament. We could have won it but we weren’t lucky enough”, the gaffer noted.

Planting for Food and Jobs failed due to poor implementation...
37 minutes ago