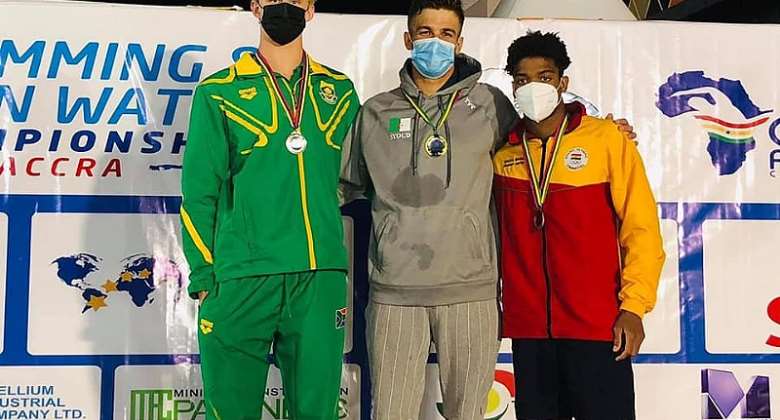 The 7-day event which commenced on October 11 ended on Sunday at the Bukom International Pool.

Abeiku Jackson, one of Ghana’s 18 participants won the country’s two medals at the Games. The 2-time Olympian finished 3rd in the Men’s 100m Butterfly with a time of 53.98s on day two and followed it up with a silver triumph on day three with a time of 24.18s in the Men’s 50m butterfly event.

However, in his bid to win Ghana’s first-ever gold in the championship, the 21-year-old slumped in his final race on day six after finishing 7th in the 50m freestyle event with a time of 23.47s.

Among Ghanaian swimmers were CANA Zone Two gold medalist, Nubea Adjei and Unilez Takyi who represented the country at the Tokyo 2020 Olympic Games in July.

12 countries mounted the podium as South Africa topped the standings with 101 medals attained (50g, 33s and 18b) They were named the overall best country in the Seniors and Juniors categories. Egypt in second with a total of 96 medals (26g, 42s and 28b).

Tunisia will be the host for the 15th edition of the CANA African Championship next year.

'It's nice to be with tigers; every time I come near them I ...
6 minutes ago