Africa's policies hold key to LGBT rights on the continent: here's how 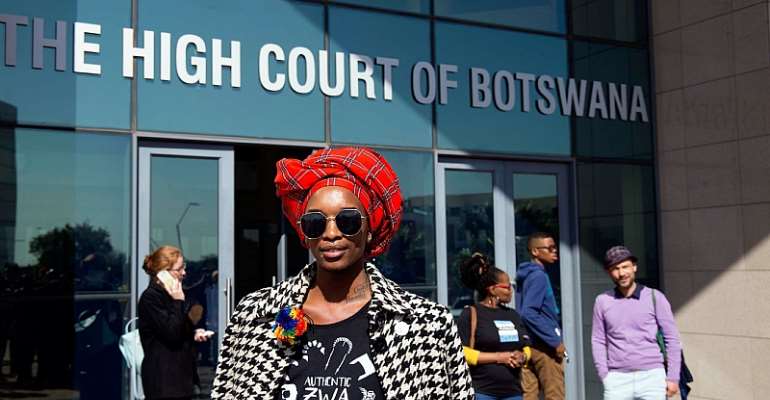 An activist poses for the camera outside Botswana High Court which ruled in favour of decriminalising homosexuality in June 2019. - Source: Tshekiso Tebalo/AFP via Getty Images

Questions of sexual orientation and gender identity and expression have continued to divide opinion across the globe. This is primarily driven by legal, cultural and religious beliefs and interpretations.

Some countries, including Uganda , Nigeria and Togo , have passed these kinds of punitive laws. Others, like South Africa, have reviewed their constitutions to permit homosexuality .

Mainstream public sentiment remains largely anti-homosexual and overshadows constitutionally guaranteed rights in Africa. This is to blame for several instances of civil harassment, killing and mistreatment of people who identify as or are suspected to be lesbian, gay, bisexual or transgender (LGBT), among other varieties of sexual and gender minorities.

Yet African governments have signed onto regional commitments and agreements to guarantee the human rights and inclusion of all people. One of the most important legal instruments is the “The African Charter”, which was adopted in 1981 and ratified by all African countries except Sudan. The Charter grants rights to everyone without exception, with its Article 2 stating that

every individual shall be entitled to the rights and freedoms recognised and guaranteed in the Charter without distinction of any kind.

In Article 4, the Charter asserts that

every human being shall be entitled to respect for his life and the integrity of his person. No one may be arbitrarily deprived of this right.

As we concluded in our recent paper , regional policy documents such as this offer African countries that don't protect LGBT rights the basis to draft domestic legislation as the first step to protection to all.

The African Commission on Human and Peoples' Rights is charged with ensuring that African Union member states protect the rights of all. The Commission has several instruments that set out to ensure this happens. Frameworks include key terms such as “all” and “everyone”, among others, and reflect the commitment to “leaving no one behind” as espoused in the Sustainable Development Agendas.

Some of the frameworks this principle is enshrined in include: Agenda 2063: the Africa we want ; the African Charter on Human and People's Rights ; the Common African Position Post 2015 Development Agenda ; and the Africa Charter on Democracy .

Even in the face of conservatism, these frameworks set out ambitious aspirations of inclusion that, if read with the liberal intentions of the drafters, highlight the rights of LGBT members of society. They lay the foundation for reasonable social action and progress because they advocate for inclusion in economic opportunities, justice, equality, repudiation of discrimination, and freedom from arbitrary and unjust treatment. They therefore envisage that all members of society should enjoy this wide array of freedoms.

Notwithstanding the broad and liberal tones of these instruments, they fail to clearly and explicitly mention or recognise LGBT people as a minority group that deserves protection. Not mentioning LGBT people, unlike women, girls, the disabled, people living with HIV, youths, etc., leaves ample room for the discrimination of this group and their continued maltreatment.

But national governments need to step up to the plate. Those that don't protect LGBT rights must put these guarantees into their domestic laws. They must also then show a commitment to interpreting existing supportive regional instruments broadly and in sweeping terms. A narrow interpretation of the regional policy documents runs the risk of excluding LGBT communities because they aren't explicitly named in the frameworks.

State policies, laws and public attitudes have subjected LGBT individuals to exclusion, discrimination and fear. They are daily targets of threats; they face sexual harassment and are prosecuted and persecuted. They are also denied sexual and reproductive health care and are seldom protected by state laws and security apparatuses.

In a number of African countries, several legal guarantees sought by LGBT individuals and groups have been adjudicated on the basis of the African Charter. These include the case of Attorney General of Botswana v. Thuto Rammoge and 19 others. The High Court of Botswana in 2019 ruled that private consensual sex between adults of the same sex is no longer criminal.

There have also been favourable rulings for LGBT people using the African Charter in Zimbabwe and Namibia.

These rulings also provide the basis for countries developing and implementing policies and programmes that protect LGBT people.

The AU also needs to strengthen the commission's monitoring mechanisms.

In countries with homophobic laws, the next level of engagement is to translate constitutional and policy stipulations into practical changes for LGBT people to protect them from public and summary punishment by mobs, among others. Countries with constitutional protection for LGBT people must also ensure that the guarantees actually translate to protection in practice.

Chimaraoke Izugbara receives funding from the Ford Foundation, The Summit Foundation and the Hewlett Foundation

Chimaraoke Izugbara, Professor-at-large, School of Public Health, University of the Witwatersrand And