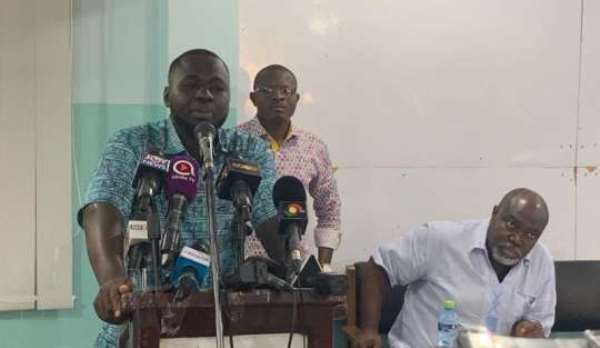 The Mass Action Committee, a coalition of political parties has shot down claims that the Electoral Commission (EC) has not been upfront with Ghanaians about the existing Biometric Verification Registration (BVR) kits.

It said the EC’s assertion that the BVRs had become obsolete was the absolute truth.

Addressing a news conference in Accra on Wednesday, Atik Mohammed, the Executive Secretary of the Coalition, cited a letter signed by Marcel Boogaard, the Chief Executive of Officer HSB Identification, the company that supplied the BVR's dated May 2018, which said the kits and the laptops had reached end-of-life.

They were responding to allegations by the Interparty Resistance Against New Register (IRANR) that the BVR was in good condition and could be used.

Mr Mohammed said other allegations levelled by IRANR that the EC's procurement processes were legal because the commission was following due process and ensuring value for money.

He said the EC with the decision to procure new BVR was making a savings of US$18,354,500 for the country.

Mr Mohammed said democracy was better served if the state institutions such as the Electoral Commission was allowed to discharge it’s constitutionally mandated duties and urged the Interparty Resistance Against New Register and the public to support the EC to succeed.

He declared the group's support for the activities of the EC adding that the group would commence an educational campaign to explain the need to compile new register to the public.

Mr Mohammed said recommendations from international and national technical experts indicated that comparing the cost of upgrading and refurbishing of the current system and procuring a new system, it was prudent to acquire a new system to meet the current demand.

The reason for a new system was to have a credible voters’ register that would confer legitimacy on the electoral process, enhance efficiency, prevent electoral fraud and avoid doubts about the election's inclusiveness and outcome.

“A large quantity of the kits had many faulty component parts that were difficult to replace (keyboard, mouse, screen, camera). The inkjet printers were failing at a frequent rate,” he said.

“The battery packs had worn-out and therefore the decreased battery autonomy could not guarantee continuous use of the BVR”.

Regarding the need for new Biometric Verification Devices (BVD), he said the Commission recorded a high failure rate of the BVDs, and had spent so much money in refurbishing them for use for the various elections.

“During the recent District Level Elections, the commission spent GH¢2 million to contract technicians to fix it over the period of six months,” he said.

“The sensors of many of the devices are worn out, which means poor image acquisition leading to repeated attempts on verification”.

Mr Mohammed advised the Interparty Resistance against New voter register to use the law court to address their concerns and not through protested and occupying their office.

He noted that the group could proceed to court and compel the EC to desist from compiling a new register instead of engaging in stress protest and attacks on the commission.