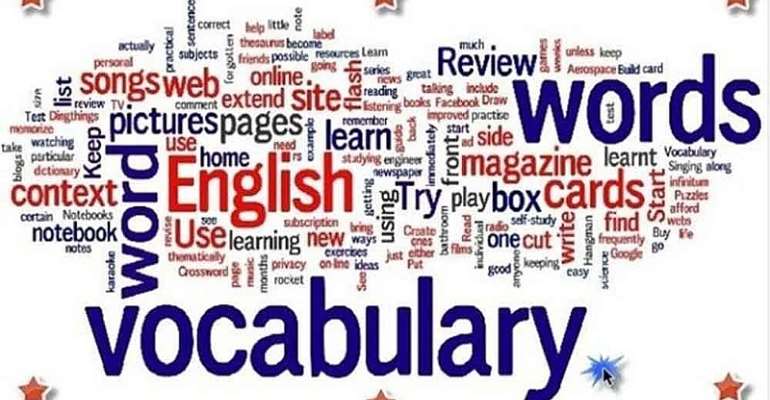 Using the appropriate word or expression poses a big challenge to many writers and speakers of the English language. Choice of words plays a key role in the Queen's language, in that when a word or an expression is wrongly used, it could potentially alter the content of a message. This clearly underscores the importance of choosing appropriate words or expressions to ensure effective communication.

Let's consider some pairs of words that are wrongly used interchangeably by many writers and speakers of English on a daily basis.

The Oxford Dictionary describes a cutlass as 'a short sword with a curved blade that was used as a weapon by sailors and pirates in the past'. It describes a machete as 'a broad heavy knife used as a cutting tool and as a weapon'. Based on their respective descriptions, machete better fits the implement we use in Ghana and which we erroneously call cutlass.

Unveil means 'to remove a cover or curtain from a painting, statue, etc. so that it can be seen in public for the first time', e.g. The President unveiled a plaque to mark the official opening of the factory. Besides, unveil means 'to show or introduce a new plan or product to the public for the first time'. Examples: The government has unveiled plans to embark on massive road construction projects in 2020. They unveiled their new models at the Motor Show yesterday. Based on the foregoing, we unveil something, not somebody.

As regards choice of words, 'impending' and 'forthcoming' should not be used interchangeably. As an attributive adjective, 'impending' is usually used to describe an unpleasant event that is going to happen very soon. Thus, we can talk of 'an impending earthquake', 'an impending flood', 'an impending fatal accident,' etc. Hence, expressions such as 'impending victory', 'impending referendum' and 'impending Christmas' are inappropriate. 'Forthcoming' or 'upcoming' is appropriately used for a situation devoid of a disaster or something of that nature.

Carefully study the following sentence: I have advised Kwame severally to respect elderly persons. It is noteworthy that the adverb 'severally' does not mean 'several times' or 'several occasions'. It means 'separately', e.g. The two levels of government sort out their responsibilities severally. Hence, the incorrect sentence should be corrected as follows: I have advised Kwame several times to respect elderly persons.

Many writers and speakers of English wrongly use'offload' and 'unload' interchangeably. As a verb, offload means 'to get rid of something that you do not need or want', e.g. Some waste materials are being offloaded at the dumping ground. As a verb, unload means 'to remove things that you need or want from a vehicle or ship after it has taken them somewhere'. Examples: My children helped to unload the luggage from the car. Some bags of rice are being unloaded from the truck for the staff of the company.

Carefully study the following sentences: Philip is my senior brother. Theresa is my junior sister. The two sentences are incorrect.

Therefore, the incorrect sentences should be corrected as follows: Philip is my elder brother. Theresa is my younger sister.

The writer is a proofreader