Are Waiting For The Ghana Card To Be Inaugurated? 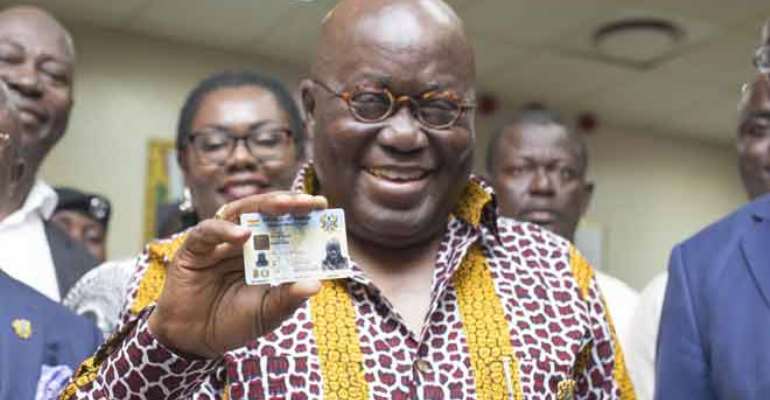 I recall a prominent Ghanaian politician once lamenting about the worrying situation in the country where one arm of the government machinery doesn’t know what the other is doing. That was quite some time ago but it remains quite fresh in my mind because I’ve always had a problem with that situation. Unlike in other countries where a great number of institutions running the country are privately managed, we live in a country where one way or the other, the central government is involved in whatever goes on everywhere including even the construction and management of village public toilets (‘bomber latrines’ and KVIPs).

The case of the left hand of the state either not knowing or not caring a hoot about what the right is doing can easily be seen as in the case where shortly after the construction or repairs of a new town road workers of either the electricity or water companies come to dig up portions of the road to do their own thing. There are a thousand and one examples to illustrate this but let me cut it short by going straight to the main topic for this piece.

When Is The National I.D. (Ghana) Card Going to be Recognised?

For a long while, I’ve been carrying my Voter I.D. Card for purposes of identifying myself. But after spending almost two full days to acquire my new Ghana Card, I thought it wise to keep the Kokromoti Card at a safe place and carry the much-touted all-purpose and almighty Card in my wallet. After all, didn’t we hear from the President (Opeemu no ankasa), his Vice that after the issue of the Ghana Card it would become the primary means of identification in the country? And why not, when in my particular case, not only were details of ALL my identification documents – Passport, National Health Insurance Card, Driving Licence, GRA Tax Identification (TIN) Certificate – taken but were also scanned to support my Ghana Card application? But proof of the usefulness or otherwise of the Card was to come only a few days later.

A friend of mine in the U.S. had sent me some money to be given to his family and I went to a financial institution in Sunyani to cash it. As I’d always done it, I added my I.D. (in this case the Ghana) Card to the completed form and handed them over to the lady at the counter. Without even raising her head to acknowledge my presence and with a what-does-this-man-want-at-all look she asked whether I didn’t have a Voter I.D and ended by pushing my precious Ghana (ECOWAS Citizen’s) Card back at me saying ‘we don’t recognise this one’. Not only was I shocked, I was also so annoyed I didn’t decided not to argue with her. Fortunately there was another financial institution only a few hundred metres away and I walked in there. While the lady at the counter there was much more polite than the first one, the value ended up being pretty much the same. “Daddy, please don’t you have a Voter I.D.? As for this one we cannot verify it”. I asked her: so how do foreigners in Ghana cash their remittances since the Voter I.D. appears to be your I.D. Card of choice? Her answer was that a foreigner would be required to produce a passport.

Of course there are many annoying things one has to deal with daily in Ghana but clearly some are more annoying than others. To start with, it took me an aggregate of two whole working days covering five separate visits to the registration centre to acquire my ‘Ecowas Identity Card’ and here am I with it in my wallet not knowing what to do with it. It is supposed to be an Ecowas Identity Card indeed but if it is not recognised in Ghana, its issuing country, would I not be a fool to attempt to produce it at the Aflao, Elubo, or Paga border expecting to be allowed entry into any of these Ecowas countries? So why are we always more interested in introducing policies than ensuring that they do work?

And by the way, why do we always prefer to be complicated on otherwise simple issues or is it rather that we are dumb? The Ghana Card is not just a card with anybody’s name written on it. Not only does it have the bearer’s printed photograph but also his/her signature! So what other ‘verification’ does even the dumbest counter clerk need to identify a person in possession of this card?

And My Card Is Not One of The First
If my memory serves me right I think it has been almost two years since the current National Identification Authority (NIA) with a whole Professor and Lawyer, Kenneth Attafuah, in charge was established to issue identification cards to Ghanaian citizens and foreign residents in the country. So my own Card issued to me in November 2019 is not the first. After piloting the process and apparently dealing with all initial technical problems way back in 2018 the mass registration exercise started in April of this year. Before reaching us here in the Bono Region they had been to eight other regions which would make one assume that the equipment and their mode of operation had been perfected or at least greatly improved. But what did we see here in Sunyani? Chaos!

Let someone conduct a research and tell us how many man hours have been lost to the state, private businesses, farmers and market women over the period of this exercise. But apparently nobody cares about that. Otherwise, after Greater Accra, Volta, Oti, Savanna and other regions one would have expected that measures would be put in place to ensure that people wouldn’t leave their jobs to go and push and be pushed around only to be issued with a Card which cannot be ‘verified’.

So When Will The Cards Be Commissioned?

I’m not that naïve to think for a moment that the Ghana Card will for ever not be accepted by financial institutions for the reason that they cannot be ‘verified’ but the question is how long am I supposed to wait for an official announcement like: “Fellow Ghanaians, from today go, your ultra modern Ghana Cards are now internationally recognised for purposes of identification”? In other words, when are they going to be inaugurated, commissioned or declared valid for identification?

To the best of my knowledge the moment a passport is issued it is valid for use as a travel document. Just the other day the Bank of Ghana issued new currency notes and as we all know, I could go shopping with them immediately. So what about the Ghana Card which after all has a specified validity date? Or could it perhaps be my fault that I chose to transact business with the only two financial institutions in Sunyani that weren’t properly equipped to verify my card? In that case I sincerely apologise to Prof. Attafuah and his team for any unintended damage I may have done to their reputation. That not being the case however on the other hand, I believe they owe me and all Ghanaians like myself who have been fooled into spending valuable hours to acquire a card of questionable usefulness.