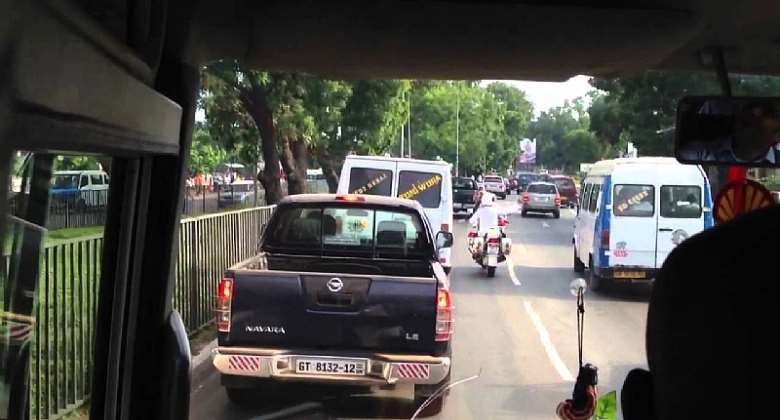 This morning, I feel obliged and obligated to once again pick up my phone to scribble a little common sense for the benefit of many of our drivers on our roads most of whom sadly are security officers who should know better who jumps into any convoy that comes their way when they find themselves trapped in traffic.

They have no idea the grievous risk they place on themself and other occupants of their vehicles as well as the proceeding convoy. They don't know they could be mistaken for an "enemy on pursuit" who could be shot like dogs.

A convoy like I indicated recently in write up is a group of vehicles that travel together from point to another typically accompanied by armed troops, or other vehicles for protection.

When these armed troops feel threatened by the presence of "elien or invited vehicles" especially those who refuse to stop when they are ordered to do so, could open fire in preemptive self defense and protection of their VVIP and the entire convoy which is their primary responsibility, duty and purpose for being part of the convoy.

These terms are;
1. Self Defense
2. Preemptive Attack
A preemptive attack is an attack that is commenced in an attempt to repel or defeat a perceived imminent offensive attack by an enemy to gain a strategic advantage in an impending attack shortly before that attack materializes. It is an attack that preemptively repels an attack.

Similarly, preemptive attack is a military doctrine whereby an individual or state claims the right to launch an offensive attack on a potential enemy before that enemy has had the chance to carry out an attack.

In war studies, it is also referred to as "Jus Cogens"

Jus Cogens is peremptory norm and a fundamental principle of international law that is accepted by the international community of states as a norm from which no derogation is permitted.

Self-defense on the other hand is a countermeasure that involves defending the health and well-being of oneself and or a team in this case a convoy and the VVIP from imminent danger or harm.

It evolves the use of the right of self-defense countermeasures as a legal justification for the use of force and arms in times of danger which is available in many jurisdictions.

There are essentially four elements required for self-defense to be justified and this can be found when uninvited vehicles on pursuit of a proceeding convoy refuses to stop and these are: (1) an unprovoked attack (2) which threatens imminent injury or death, and (3) an objectively reasonable degree of force, used in response to (4) an objectively reasonable fear of injury or death.

It is important to establish that any proceeding convoy that feels, perceives observable danger of being in a potentially dangerous situation of an imminent attack or "planned accident" reserves the right to take the necessary steps to protect the VVIP (Principal) and the entire convoy.

Ya-Na commiserates with Mahama
48 minutes ago