The Blind Condemnation Of Security Convoys ― What You Need To Know 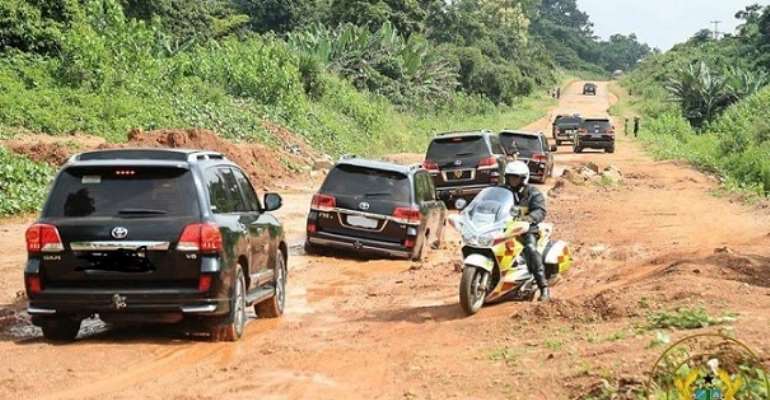 Whether in the past or now; many of the politicians who have criticised the size of security convoys for VVIPs have done so either totally out of sheer ignorance, mischief or for misinformation/propaganda purposes.

Usually, you will not have those of them -the political commentators who understand issues relating to security make such ignorant comments.

Especially those of them who are retired security officers who understand and appreciate what goes into constituting convoys for VVIP protection purposes. "You can be sure" that those in that bracket will never join the rest of them who don't understand a thing about security criticizing security details or convoys for protection of VVIPs.

A security convoy depending on the level of threat/stability/instability of any local/general area as per classified information provided by advanced teams comprising of Intel/plain clothes and uniformed officers about a particular area could be larger or small.

Usually, convoys of VVIPs for visits differ from place to place. A convoy for point A does not necessarily have to be the same as that which is travelling to point B.

A convoy is made up of vehicles travelling together for mutual support, protection and in extreme cases, defense and attack with available organised defence support.

Or better still, A convoy is comprised of vehicles, typically motor vehicles or ships, traveling together for mutual support and protection. Often, a convoy is organized with armed defensive support. It may also be used in a non-military sense, for example when driving through remote areas.

A typical convoy for a VVIP has the following teams;

I will attempt a brief explanation of what all of these teams contribute to complete a convoy, or what they actually mean in the common sense security perspective.

First of all, I will like to start with an Advanced Team. An advance team is a small group of soldiers, police, plain clothes, operatives or a blend of some or all of them who go ahead of the main body of details to prepare the way for their arrival, or any group that does the same thing or arrives ahead of the main body.

Counter Assault Team is a specialized tactical unit in the presidential detail or intelligence and security services that provides tactical support to the Presidential Protective Unit usually referred to as VVIP protection Unit in Ghana with the sole purpose of protecting the President and other VVIPs.

A recovery team is the aggregation of military, police, civil, and political combined strength whose presence in the convoy team is to obtain the release or recovery of other details in the convoy from uncertain or hostile environment, inaccessible or denied areas whether they are captured, missing, or isolated.

A lead is team in a convoy that provides guidance, instruction, direction and leadership to the entire of personnel in the convoy (the sum total of the team) for the purpose of achieving a key result or group of aligned results.

The presence of the ambulance or a vehicle specially and specifically equipped with the sole purpose of taking sick or injured members of the convoy in case of an accident, attack or any unforeseen ailments to and from hospital.

Present in the convoy is usually a medical team comprised of a group of physicians and healthcare workers whose responsibility is to ensure medical needs of all details in the convoy are well taken care of whether they happen to be taken ill or injured. In case any member of the team becomes a patient so to speak in a hospital, it is the duty of the medical team to be present with him or her all through.

The presence of the intelligence team is to gather advance information and intelligence that can be used to inform decisions regarding the convoys, preparedness, readiness, anticipated mishaps, movement including how to respond to threats in case they come up in the course of the journey.

Plain clothes team members in the convoy put on everyday normal dresses for a purpose. To wear plainclothes is to wear civilian clothes, instead of wearing a military or police uniform, to avoid detection or identification as a law enforcement officer.

The fire and rescue teams respond to a wide variety of situations including crashes involving team members, chemical attacks,, flood situations, water rescue and general rescue as well as fires.

All of these various teams in the convoy are important and not a single one of them can be substituted, removed or asked to be on standby for any reason. They all have specific task they are required to perform which is why they move together as a group.

All of these specialized teams are necessary and key component of the presidential protection unit also known as VVIP Protection Unit.

VVIP or VIP protection generally means the provision of executive protection to the president of country, his cabinet and other officers close to him including ministers, and family members.

VIP protection can also be provided to individuals in the society who may need it and can afford to pay for the cost involved. The type of people aside the president and his office staff that usually ask for VIP security protection may include celebrities, politicians, dignitaries, business leaders, executives but may also include those who have had some sort peculiar threats their lives by sophisticated criminal gangs.

So, for anybody to criticize a convoy, that person must first and foremost try to dig deep and find out the duties of each of the teams to see whether such a department of the security mandated to protect the number one citizen and other VVIPs should be that big or small.