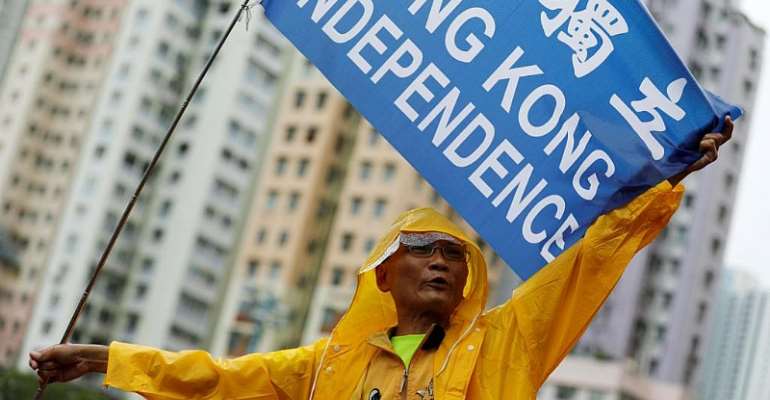 The government in Hong Kong has said "illegal violence" is pushing the city towards a very dangerous situation. The warning comes as police said they were forced to use water cannon and fire a warning shot, as pro-democracy rallies again descended into clashes at the weekend.

Sunday's violence in the district of Tsuen Wan was some of the worst in three months of political unrest.

In one incident, a group of police were cornered by protesters armed with bricks and other weapons. One officer fired a warning shot into the air as a precautionary measure after a colleague fell to the ground under a barrage of blows from "rioters" according to the police.

It is believed to be the first time an officer has fired a live round during the crisis.

"The escalating illegal and violent acts of radical protesters...push Hong Kong to the verge of a very dangerous situation," the government said in a statement.

Some 86 people were arrested over the weekend, including a 12-year-old, charged with unlawful assembly, possession of weapons and assaulting police officers.

Demonstrators' tactics have changed as they rapidly convene, then disperse, appearing later in other parts of the city. Some have erected barricades to prevent movement in the economic hub.

Hotels and restaurants are not filled to capacity and economists estimate that the retail sector could suffer up to 30 percent in losses this year.

Some trade conferences slated to take place in Hong Kong have been postponed.

Protest are planned for Wednesday outside Cathay's headquarters.

Reports of paramilitary troops conducting drills in the mainland city of Shenzhen, some 30 kilometres from Hong Kong, have raised fears that China could intervene directly with force to stop the protesters.

"She is the one who should shoulder all the responsibility and now she is...shifting the focus to the so-called platform for creating dialogue," said Kwok Ka-ki, a member of the Civic Party, who denounced the move as a delaying tactic.

Meanwhile, pro-government members of the legislative council came out on Monday to condemn the violent protests.

"You can say a lot of different opinions to the government," said Democratic Alliance for the Betterment and Progress of Hong Kong Chairwoman Starry Lee. "But violence is different. If we accept violence, our city will be ruined," she added.

The police also came out to condemn acts of violence, after 21 police officers were injured on Sunday.

"The police have zero tolerance for violent acts," said Assistant Police Commissioner Mak Chin-ho. "Is this the Hong Kong you would like to see?"

The police continue to call for calm.
"Police appeal to members of the public to make a clean break with violent protestors," according to a statement released by Hong Kong's police department, adding that they would bring perpetrators to justice.

Daily protests are expected to continue, with another major protest scheduled for Saturday. Organisers have called for the march to remain peaceful.