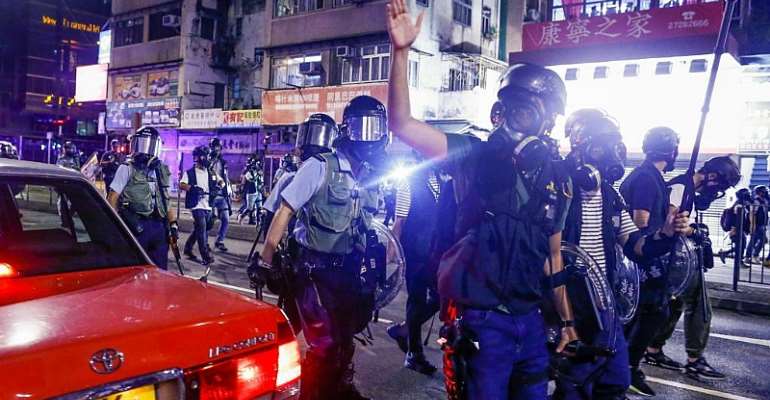 Amid fears of a potential Chinese military intervention in Hong Kong, China's ambassador to London warned Thursday that Beijing has the power to swiftly "quell the unrest" if the political crisis spirals beyond the control of authorities.

In a televised press conference, Liu Xiaoming said China's central government would not “sit by and watch” if the situation in the semi-autonomous territory deteriorates into unrest that is deemed “uncontrollable”.

More than a thousand flights were cancelled this week amid protests at Hong Kong airport, while police clashed with pro-democracy activists on the streets of the financial district – as more than three months of protests show no sign of abating.

Photos, footage of Chinese troop build-up
Images published in the media show Chinese armoured vehicles parked in a sports stadium in the city of Shenzhen, just across the border from Hong Kong, along with thousands of Chinese military personnel waving red flags.

However before China can send in troops, Hong Kong needs to be in a declared state of emergency, says Claudia Yip, from the Hong Kong Human Rights Monitor.

“Right next to the legislative council is the People's Liberation Army headquarters, and there are soldiers ready to be deployed whenever there is an order,” Yip says.

“But that order would have to comply with the basic law of Hong Kong's constitution … Law and order is not at the point that would require intervention. The army intervening in the protests is not going to solve the political crisis; it's only going to accelerate it.”

Protest violence described as "terrorism"
China this week likened the violence during protests to terrorism – calling for the city's police to end “violent criminal activity”. The move has intensified fears that Beijing may be considering taking matters into its own hands.

An act of terrorism would defeat the purpose of the pro-democracy movement, Yip says, adding that the people of Hong are fearful of the police – not the protesters.

“Even Hong Kong's police force has denied protesters are turning to terrorism. They [the police] say there are violent acts – and we agree with that – but they say they do not amount to terrorism,” Yip says.

“It would be really sad for protesters in Hong Kong who have been fighting for democracy and demanding the withdrawal of the extradition bill to have to resort to terrorism.”

Although analysts agree military intervention in Hong Kong would be risky for China, Thursday's comments by Xiaoming add to fears that Beijing may be losing patience with the ongoing protests – and Hong Kong's failure to calm them.

“Hong Kong has a very unique situation in the whole of China – with freedom of the press and of information,” Yip says. “One reason we feel the Chinese government is getting tougher is because they see Hong Kong as a base for the movement to overturn Chinese communist rule.”

Yip says most people aren't worried about the deployment of troops just yet – but they are aware of the need to protect the freedoms that Hongkongers enjoy. Memories of Tiananmen are never far, either.

“People in Hong Kong always have in the back their minds the possibility of Chinese intervention.”