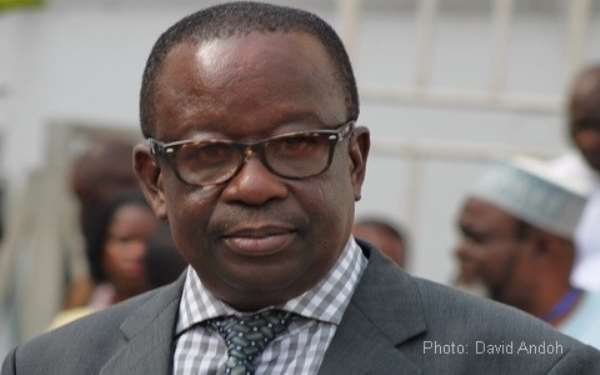 It is my anticipation that you are well and kicking. Our culture teaches us to do what I just did – that it is good to greet or inquire about the well-being of anyone you encounter or seek to engage. Put differently, the founder of my church, Prophet C.K.N. Wovenu thought us that even if you intend to slaughter a fowl for food, first give it water to drink. That is not to say I am on a mission to slaughter.

That appropriately done, Mr Minister, I must say I am totally gobsmacked by your utter silence over growing national security concerns; journalist assassination, threat of harm; forcing some into exile, kidnapping, election violence, culture of silence through targeted opposition radio stations closures.

The latest we have woken up to is a raid by National Security operatives of the offices of the most liberal news website, Modern Ghana and the abduction of the Editors for torture.

Silence they say means consent. Can you say the office raid and torture of the Editors never had your approval? Why then this deafening silence on your part on this dastardly act? Unbelievable!

The trend, particularly the attacks on the media and its practitioners – Modern Ghana raid/torture, closure of radio Gold, XYZ and their affiliates in the regions etc appear a gestapo operation – State sponsored criminal actions which seek to stifle the efforts of dissenting voices and free expression which is guaranteed under Article 21 of the 1992 Constitution of the Republic of Ghana.

What many may not have realized, since the attack on Modern Ghana, the website and others would not publish critical articles which included two of mine, one titled “5 Reasons Why National Security Minister Must Go.” It took me about 4 days to get one bold female Journalist [whose name I would like to keep] to risk to publish the first one on her media outfit’s website.

Seen the grave danger? Hitherto, it takes me less than 24 hours to publish on Modern Ghana any article of mine even though I have never in person met the Editors. After the raid and torture, it is taking almost forever to publish. That is not what we fought for.

That website, arguably is the most liberal that one can find and has almost all the NPP avid writers’ publications including the most acerbic-tone ones without ever being raided by National Security.

I have said in order to succeed; the National Security Minister and other high-ups are the ones to face to resist this cowardly acts and senseless-ness. Otherwise, it will fester with consequential effect on our Press Freedom and overall democracy.

Already, Ghana under Nana Akufo Addo had lost its enviable position as Africa’s number one in terms of press freedom.

Again, what is disappointing is that the one directly superintending this National Security led barbarism is Albert Kan Dapaah who for his vast experience got quite a high approval from the people over his nomination as the sector Minister.

Major Boakye Gyan (rtd) was one of those who welcomed the decision. He told Accra fm “this is a man who has the experience and can understand what the needs are. He would be able to detect bogus reports and throw into the bin. I don’t think there is anybody in this country now who qualifies to do that job than him.”

I am quite sure if Major Boakye Gyan is interviewed today about same, his narrative would change.

President Akufo Addo himself, explaining the reason for creating such a Ministry said “balance of security and freedom is best protected when there are accountable officials who are responsible for the apparatus before the parliament.”

He added that “it is important that we [have the National Security Minister] because the accountability of the people who work in National Security and the whole apparatus to the Ghanaian people through parliament is a very important step towards building a society which is secure and at the same time respectfully rides on the rule of law and civil liberties.”

Isn’t it baffling that it is on the back of the President’s promise of protection of civil liberties and ensuring the rule of law that National Security operatives raided Modern Ghana offices, abducted the Editors for torture?

It is about a month, yet the National Security Minister on whose part the goons engaged in the dastardly act hadn’t spoken, let alone apologize to the victims and assure the good people of Ghana.

Civil Society group, One Ghana Movement’s demand on National Security to make available the CCTV footage on the treatment meted out to the Editors had also gone unheeded.

Where is the accountability? Zero! Our President’s promise that rule of law and protection of civil liberties would undergird the National Security Ministry’s work is mere rhetoric and mundane lip service. He has proven to be the exact opposite of a protector of civil liberties.

I have resolved that until the National Security Minister becomes that moderating voice we expected – in this particular case - speak and apologises for the Modern Ghana raid and attack on the Editors, he will continue to hear from me.

Mr Minister, you will speak and do the needful – not to condone crime but ensuring that the offending operatives are severely punished, assuring and ensuring the public enjoy appreciable national security.

Even if this requires prayers and deliverance to do the needful – exorcizing the monster-kind of traits that we are having to face under Nana Akufo Addo, Ghana doesn’t lack proper Men of God for that job.

Do The DNA Test For Rawlings And His alleged 52 Years Old Da...
19 minutes ago