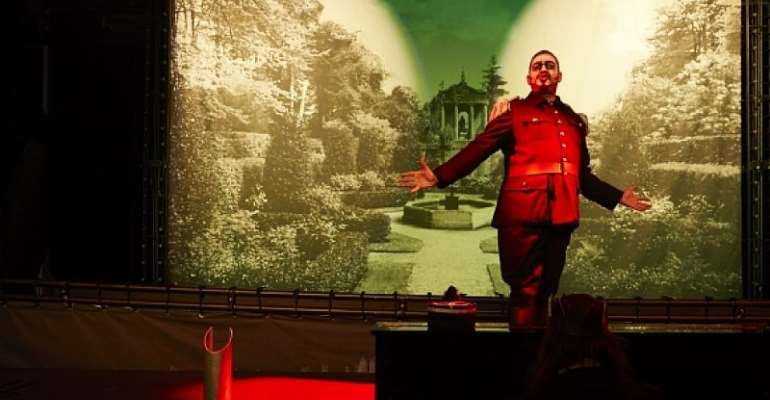 Two plays for children 'Love Triumphant' and 'Snow White: The Story of a Prince' take the Brothers Grimm's fairy tales on the stage. The Festival's artistic director Olivier Py said that staging plays for children is a risk he's willing to take to encourage future generations to enjoy theatre. "It's a very big responsability, because it's their first show. They should be able to see the beauty of theatre," he said.

L'Amour Vainqueur, Love Triumphant, triumphed in the Mistral Lycée's sports hall in Avignon. The audience was on their feet cheering by the third curtain call on Saturday night.

Writer and director Olivier Py takes his story from a fairy tale, 'Maid Maleen' and turns it into an operette.

A princess' father locks her up in a tower because refuses to marry his choice of husband. She has fallen in love with another. When she is let out, the face of the world and of her lover have been destroyed by war.

The young woman (Clémentine Bourgoin), has to wander in exile, like Odysseus, and encounter suffering but her determination and her hope, keep her going

However, true to fairy-tales, good wins over evil, love conquers hate, and the bees return to pollinate the flowers in a beautiful garden.

Py has a twinkle in his eye as he explains why he directs plays for children, "it allows me to do happy endings. The adults don't. So I feel freer to be full of hope... I feel that doing theatre for children is one of the most difficult things I do because you can't you lie to children."

The Festival's artistic director Py is no stranger to the art and craft of musical hall, of song, of burlesque, but it's the first time he has actually composed songs

Recognised amongst other things, for his often exquisite poetry, Py said "there's a difference with the singing in my head I do when I write poetry, but I still don't know how I dared to write songs! I worked a lot on the rhythm in the writing."

Bourgoin, along with Pierre Lebon as the love-lorn prince and the comical, subserviant washer woman, Flannan Obé as the Gardener and Antoni Sykopoulos as the aggressive general and the greedy king, offer a joyful, seamless show à la Gilbert and Sullivan, or more appropriately, à la Offenbach.

Dispensing with the frills and the choir, Py distills his own theatre history and experience into a contemporary piece, his fourth for written specifically with a young audience in mind.

He's assisted by Pierre-André Weitz's simple and effective festival of lights, as well as curtain/screen decors in black and white and grey, printed with stage-height photographs of warscapes, are they 19th, 20th or 21st Century?

Snow White revisited Lyon-based director Michel Raskine teams up with a Breton writer, Marie Dilasser to concoct a new take on Snow White. For a start, instead of seven dwarfs, there are 101 of them.

This is a sequel which begins after Snow White and the prince who has kissed her back to life are now married. The couple is already in a rut.

Snow White keeps growing and the Prince is ageing just as fast. Life is just not a bed of roses.

Swiss actor Tibor Okenfels is almost two metres tall and plays a frustrated and petulant Snow White. She's in love with a character from another fairy tale written by Alphonse Daudet.

The impish Raskine says, "its a new way of seeing Snow White and reconsidering the Grimms' archetype, but also the Disney character. You can't ignore Disney. So we wanted to destroy a little bit this beautiful character. That's why this tall boy is playing the part.”

The stage play vehicles Dilasser's text which nudges the audience into thinking about our dependence on natural resources, how women can get bored and resentful if their husbands deny them their independence.

Raskine captures the imagination with inventions like 101 dwarfs as metal puppets with bobble-hats.

In the space of an hour, inside the Chapelle des Penitents Blancs, Raskine, Dilasser and the three characters play with a stage within a stage which appears to be more rudimentary than it is.

A Yellow-Haired Servant-character (Alexandre Bazan) does the needful pulling of all sorts of strings.

A sage embodied by a metal-shuttered moon magically, and noisily consoles Snow White when she is respectful, ignores her when she is arrogant.

A couple of examples, the moon is a homage to early film maker Georges Méliès, who was known for his experimental work in cinema.

Walt Disney whose cartoon film, 'Snow White and the Seven Dwarfs' marked at least one generation gets more than a look in.

'Le Jeune Yacou' is the story of Ivorian Konaté's own journey into exile, via refugee camps. He finally landed in France and at the Artists in Exile workshop.

'La République des Abeilles' is about a year in the life of bees in a one hive, and based on 19th/20the century writer Maurice Maeterlinck's work, 'La Vie des Abeilles', 'The Life of Bees'. Schaeffer trained as a visual artist who explores the three-way cross-over of theatre, language and painting.

In the Avignon Off, fringe festival, younger theatre-goers are catered for in a more than a dozen plays out of the one and half thousand, from puppets to objet theatre to story telling or pantomime.