Review: Africa At The SPIEF’19 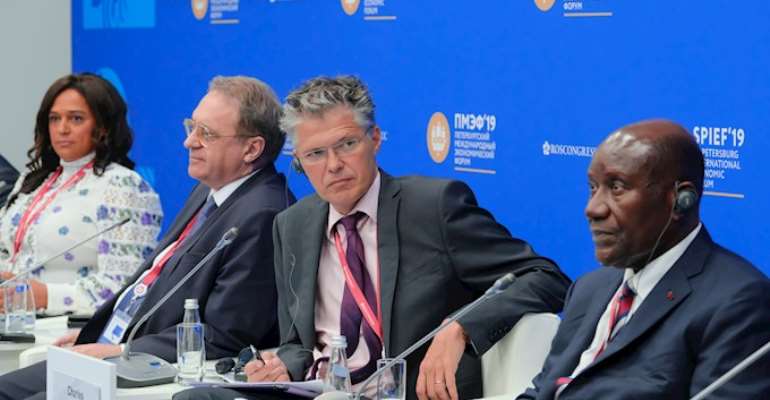 Traditionally, SPIEF is a meeting platform for world business leaders, government officials, experts and media representatives to discuss and jointly search for solutions to the most pressing issues in the Russian and global economies.

The key theme of this year’s forum, Creating a Sustainable Development Agenda, included discussions on the current state of and prospects for the sustainable development of the global economy. The business programme comprised four themed blocks: The Global Economy in Search of a Balance; The Russian Economy: Achieving National Development Goals; Technologies Shaping the Future; and People First.

With Minister Unity Dow, referring to an agreement signed between the Government of the Russian Federation and the Government of the Republic of Botswana, on waiving visa requirements for citizens of the Russian Federation and of the Republic of Botswana, Lavrov said that the agreement would ensure frequent exchanges of peoples and business community members. He further said it would provide “more comfortable conditions for interacting with each other.”

During the meeting with Foreign Minister of the Central African Republic Sylvie Baipo-Temon, Lavrov stressed that Russia and CAR would be able to find more areas for trade and economic cooperation.

“We have long-standing friendly relations. This helps us to cooperate in a way that is beneficial for the development of and the efforts to normalise the situation in the Central African Republic,” he told CAR Foreign Minister.

“The meeting between Russian President Vladimir Putin and President of the Central African Republic Faustin-Archange Touadera in St Petersburg in May 2018 and my prior talks with President Touadera in Sochi in October 2017 have proven useful for the efforts to implement the fundamental agreements which have been reached. We will work to achieve this,” concluded Lavrov.

Adviser to the President of the Russian Federation, Anton Kobyakov, also met with Vice-President of the Republic of Cote d’Ivoire Daniel Kablan Duncan at the 2019 St. Petersburg International Economic Forum. Kobyakov noted that Russia attaches great importance to deepening cooperation with its African partners in trade and investment that includes the involvement of Russian companies in the implementation of projects in various sectors.

“In 2018, trade between the Russian Federation and Africa increased from US$17.4 billion to US$20.4 billion, domestic exports grew by 18.1%, and imports to Russia from the continent grew by 11.1%. Key Russian trading partners include such North African countries as Egypt, Algeria, Morocco, and Tunisia, as well as the Republic of South Africa, located on the other end of the continent. Egypt, Algeria, Morocco, Nigeria, and Tunisia accounted for the lion’s share of Russian exports in 2018, while South Africa, Morocco, Egypt, Côte d’Ivoire, and Tunisia dominated imports,” Kobyakov said.

Vice-President of the Republic of Côte d’Ivoire, Daniel Kablan Duncan, underlined the strengthening of bilateral relations between Russia and Côte d’Ivoire: “2017 marked a half-century since the establishment of diplomatic relations between our countries. We enjoy friendly relations that encompass many areas of interaction, including political dialogue, security, trade, economic and technical military ties, energy, and scientific, cultural, and cultural exchanges.”

Cote d’Ivoire is one of Russia’s largest trading partners in sub-Saharan Africa, and the beginning of 2019 has been marked by a significant increase in mutual trade. The outlook for cooperation in energy seems promising. The processing of agricultural products could also be included in a list of key areas of trade and investment cooperation with Russia.

Besides bilateral meetings, there were other related business programmes where Africans participated. Support of the Russian export to African countries can grow twofold and reach the level of US$1 bln this year, Chief Executive of the Russian Export Insurance Company EXIAR, Nikita Gusakov informed the Russia-Africa plenary session at the St. Petersburg International Economic Forum (SPIEF).

"There is quite a lot of projects. We supported exports to Africa with an amount of US$0.5 bln last year. Regarding sectors, these are railways, pipeline infrastructure, everything linked to food security and fertilizer suppliers," Gusakov said. There is no exact forecast of export support for Africa in 2019 but "the amount should be doubled at the least," he added.

During the plenary session, the key speakers and participants agreed that 2019 should be a historic year in the development of Russian-African relations. The Summit of Heads of State in October should take place amidst record growth in Russian exports to Africa. The first event in the history of Russian-African relations to invite the heads of all African states along with the leaders of major sub-regional associations and organizations.

Russia is interested in new markets and international alliances more than ever before, while Africa has solidified its position as one of the centres of global economic growth in recent years.

In this context, the countries need to rethink the approaches, mechanisms, and tools to use for cooperation in order to take their relations to the next level as their significance grows in the new conditions of world politics and economics. What steps are needed to give a new impetus to bilateral economic relations? What are the key initiatives and competencies that can create a deeper strategic partnership between Russia and African states?

These are among the key questions on the meeting agenda for the upcoming Russia-Africa Summit planned for October in Sochi under the co-chairmanship of President of the Russian Federation Vladimir Putin and President of the Arab Republic of Egypt Abdel Fattah el-Sisi, Chairperson of the African Union. The first event in the history of Russian-African relations to invite the heads of all African states along with the leaders of major sub-regional associations and organizations. *Kester Kenn Klomegah writes frequently about Russia, Africa and BRICS.