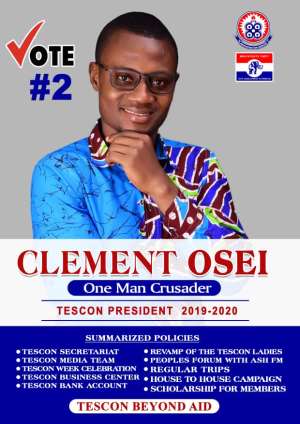 The 2020 general elections won't be easy, and so it won't be an easy battleground for the weak, inexperienced and persons without records to lead. And this is because of how poised and hungry the National Democratic Congress (NDC) is, to snatch power after just four (4) years in opposition.

And since the intellectual and mind game battle which is most paramount in our body politics will be fought by the students from the respective campuses, it would be most important to win the battle there, and since the political engine in charge of that of the New Patriotic Party (NPP) is the TESCON, there is always the need to choose the best to lead the TESCON in each of the tertiary institutions.

Due to the above, I strongly and also in all humility recommend and endorse Clement Osei popularly known as OneManCrusader as the next TESCON president for 2019/2020 term of office. I choose OneManCrusader because of his exceptional qualities and great commitment to the party's work. OneManCrusader, a name he was gifted by the public due to his extraordinary skills of mobilizing students for campaign and elections agenda for the NPP.

I will therefore humbly plead with the delegates of TESCON-UEW-K to please elect Clement Osei popularly known as OneManCrusader as the next TESCON president for the sake of the 2020 prospects of NPP.