Collapse And Mergers Of Banks - Good Omen In Disguise For The Security Of Communities. 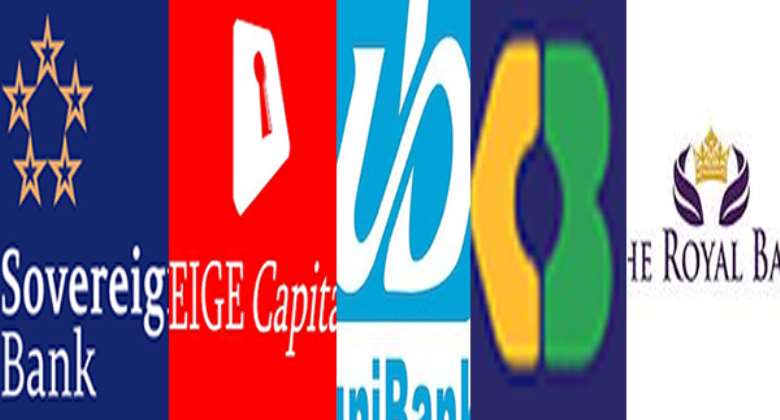 In 2017, when UT and Capital Banks collapsed because of insolvency or lack of capital adequacy and all the financial jargons plus technicalities that came with it. Many were those who expressed worry about the future of the banking sector in this country. But the Bank of Ghana which is the regulator and supervisor of the financial industry in the country said that there was nothing to be worried about.

Today, the same Bank of Ghana has had to collapse or merge five banks namely; Beige Sovereign, Construction, UniBank and Royal Banks into the Consolidated Bank of Ghana Limited.

The central bank also assured that the savings of hard working Ghanaians who saved their hard earned money with the collapse Banks as well jobs are safe and secure and that nothing untoward will happened.

That's good news enough for those who have some cash to put away in the banks as it enforces the confidence in the financial sector.

But for some of us in the business of security for this country, there is more to be happy about when we hear that banks are collapsing or merging because of one reason or another.

For those who appreciate the business of security and how much goes into protecting the many bank branches of the over thirty or so banks in this country including their bullion services and other private bullion service providers, will undoubtedly be abreast with the number of police officers who are released to protect all these banks across the country.

Let's do the mathematics and see roughly how many police officers are doing what ordinarily the banks themselves would have given the opportunity to private security organizations to take care of so that a lot of police officers will be freed and used for other important assignments including fighting robbery and controlling the humongous traffic that usually engulfs our big cities.

If the banks and of course the major stakeholders including government and the police service was to realize this and implemented it long ago, we would have created employment for the many unemployed people walking the streets of the country.

So you see why I am happy that more banks should collapse or be forced to merge so that we will have less bank branches and several billions service eating away the strength of the police service which could be better applied elsewhere instead of just guarding banks and sitting in bullion vans and distributing money around the country which often results in fatal accidents and attacks leading to deaths from criminal gangs?

Come to think of it, in this day and age where technology is almost capable of doing everything including changing a man to a woman. Do we need more than thirty or so banks and all the hundreds of branches around the country?

I wonder how many people really do business in the banking halls these days considering the fact that a very robust infrastructure in terms of mobile money transfer, interoperability, and inter bank ATM service that has made it possible for people to sit comfortably in their homes and offices to transact business without hustle.

Me for example, I don't remember the last time or year that I visited my Gold Coast Bank (GCB) branch at Ring Road West since I got my first ATM Card.

Staying away from the banking hall has even been given a big boost now since the coming of the mobile money interoperability which ensures that I transfer my salary into my mobile money account and withdraw it from any mobile money vendor any time anywhere including weekends.

Why should we be crying over collapse or mergers of banks when we that technology is available to take care of it?

Is it not rather better that we collapse, close and or merge the too many banks and bank branches so that more police officers can be released into our communities to fight crime and control traffic?

It is not lost on me that the police service makes some revenue from these banks for the protection they give to them, but when that protection that accorded the banks is measured against that which the police service is mandated to provide to citizens, it will be realized on a scale of say one to ten, protection of the citizenry and communities will weigh more than that of the banks.

Let's agree that the banks can afford private security services for their activities or a hybrid of private security and police protection. But can same be said of the citizenry in their various homes and communities?

Isn't it time that we thought about this in order to device new strategies and approaches to protecting the many banks and bank branches across the country?

Is not time that the banks collaborated with the the police, government and the private security organizations to create employment for the teaming unemployed youth of the country?

In fact, I will like to end here by calling on the bank of Ghana to merge more and more banks going forward to reduce the pressure on the Ghana Police Service.

The seven banks that have gone down so far is not enough and for those of us in the security business, we expect more mergers and reduction in bank branches and bullion services to happen in the near future so that the need for more police officers to go and sit as guards at banks or travel dangerously around the country in bullion vans to reduce drastically.

Let those who speak money speak money and allow we those in the security business to speak security.