Re - Akufo-Addo Bodyguard Punches An Oldman For Breach Of Protocol 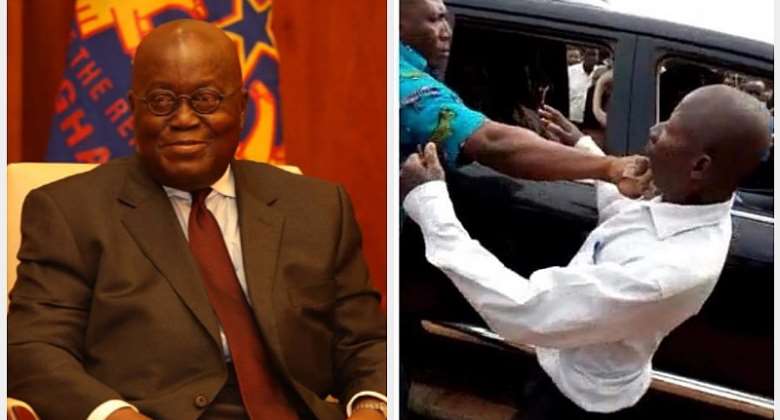 Before you condemn the action of the President's Bodyguard, please read this article I wrote sometime back when Nana Oye Lithur's bodyguard picked up her shoes whilst she was paying homage to some Chiefs...

BEYOND THE CONDEMNATIONS AND CRITICISMS OF OYE LITHUR'S BODYGUARD - WHO IS A BODYGUARD AND WHAT WORK DOES HE DO?

The work of a bodyguard as I have come to know after several years of study and experience at the National Security, is to;

1. Protect yourself first and foremost as much as possible so that you may live to protect your VIP.

2. Protect your VIP to the best of your ability from all dangers and life threatening situations perceived or real.

3. Live so that your VIP may live
The above is the universal orientation any bodyguard receives before he or she is initiated into the realm of close personal security protection of VIPs.

As unfortunate as it was for the bodyguard of Oye Lithur to carry her shoes, it is equally worrying and unfortunate to read from many platforms hosting policemen and women castigating and condemning him blindly, ignorantly and and most of all vaguely without even knowing what it takes to be a bodyguard and what work a bodyguard should do.

Many people just condemned just because they heard others condemning the bodyguard and so they should also do same.

They wanted their voices to be heard, which is good in a democracy but it must hold water and be good both in terms of merit and substance not just because everybody is condemning so let me also condemn. It doesn't work like that.

Who is a bodyguard or close protection officer?
A close personal security protection officer is a security guard or a state trained agent whose primary responsibility is to protect a person or persons (VIP, VVIPs) who are usually very important state officials, political figures, wealthy, public individuals from all forms of threats and danger whether real or perceived.

The protection guard achieves this by keeping close watch over the VIP and providing exclusive and total protection to the VIP by making sure the following are achieved;

The VIP is safe free from all forms of danger and dangerous elements.

Protecting the VIP from facing harassment and ridicule.

Protection from assassination
Protection against assault.
Protecting and keeping personal secrets and confidential information of the VIP.

And here, may I ask if holding shoes of the minister was wrong if the bodyguard felt he was the only person around who can effectively keep the shoes from getting into wrong hands? Mind you, we have so many believes as Africans apart from the dangers of biological, chemical weapons including stuffs like anthrax.

Or, if the bodyguard was to leave the shoes to lie down for someoneto steal it and cause an embarrassing situation and public ridicule for the minister with the news media reporting it for months unend.

Please may I refer you here to the definition of a bodyguard.

Another hypothetical question that comes up is that, assuming the minister was to leave the shoes down and bodyguard didn’t pick it up and someone was to get hold of it and plant a deadly explosive in it for the minister to come back and wear it into the vehicle that brought them to the venue, who will die and leave who? Will the bodyguard be spared of the death from the explosion?

Remember explosives are not always in metal forms, they come in various forms including liquid and gas.

Explosives can also be disguised as soap or creams.

Preventing the VIP from coming into contact with biological toxins, infections agents, bacteria, viruses, fungi and chemical, either from people in crowds or public functions by limiting handshakes, close contact, touching, personal effects of VIP.

A clear case in point and an example that comes to mind is the "killing" through poisoning of a former Russian KGB and Federal Security Service(FSB) operative who was reported to have defected to Great Britain's MI5 and MI6.

Alexander Litvinenko was reported to have been poisoned with a lethal chemical known as polonium-210 and here it is instructive to note that, the poisoning was done by using people who had access to his hotel room.

Going by the above, can one question the judgement of Oye Lithur's bodyguard when he held on to his "boss's" sandals?

Can we say the bodyguard did well or wrong on that occasion when he held on to the shoes considering the ever increasing threat and presence of biological and chemical weapons like for example anthrax?

Many times when stories of policemen break, one hardly hears "the other side" except the side that is usually the side that condemns the target police officer instead of constructively critiquing and bringing out the best solution to the perceived problem caused.

VIP, VVIPS and wealthy public figures don't just pick their bodyguards by heart neither do they drop from heaven, that is why they usually have the first option to choose the people they want to work with or feel comfortable with. When VIPs choose their guards and signals are sent for the said policemen, they most often have the fore knowledge of the people they are going to protect. So invariably, you can say this selection is usually done on "friendly family and friends " basis than just mere hand picking.

Probably before this bodyguard took the VIP to the place that day, he might have done his ground and location assessment, analyzed potential security weaknesses, threats and opportunities for escape from danger in case there is one.

I am not in anyway holding brief for the "erring policeman" who by all intends and purposes could pass for a candidate and a culprit in bringing the name of the service in disrepute. But, as things stand now, instead condemning or hanging the bodyguard, we should go beyond the condemnation and do a proper analysis of the situation or better still listen to the said officer. I think doing that is better than sharing the picture on the various social media networks given the least opportunity. It is not in our interest to denigrate any officer, doing so will mean we are shooting our own selves in the foot.

Bodyguard or close protection duties goes beyond the way many people look at it. It is sad that many of the things that goes into the training and selection of bodyguards have to a large extent been relegated to the back burner.

An ideal candidate for bodyguard should necessarily have the following competences;

Must always be open
Must be focused
Must be calm under pressure
Must be tactical,tactful and a team player
Must be creative
Must be observant
Must be physically, emotionally and psychologically fit.

Must be mentally sound and tough
Must be alert, discreet and secretive
Must be very observant.
A bodyguard should have training in the following;
Unarmed combat skills( knife attack and pistol attack situations)

Navigation skills
Firearms
Explosive detection
Search and rescue and
Driving, etcetera etcetera
The guard might have committed by handling the shoes but after reading the above, I want your own assessment of the situation other than the band wagon criticism most of our members have subjected him to.