The People And The Police - Who Are They? 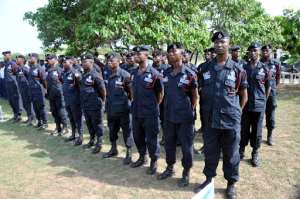 For there to exist proper and order, there must be a set of people from amongst the people (society) whose duty is to ensure that they enforce the very same laws that which are passed by the representatives of the people in parliament.

The people who enforce these laws are not don't fall from mars, jupiter or venus. They come from amongst the very people who are always quick to hold their feet up to the fire anytime they falter or make mistakes in the course of doing the very duties that this same society has sent them to go and carry out for and on their behalf.

Their only crime usually is the fact that they represent their own people to ensure that laws that their representatives pass in the house of legislature are followed and obeyed.

A police officer, also known variously in Ghana as an officer, "koti" "Aban"policeman, policewoman, cop, or" One GH" by people who like to play mischief is a warranted law employee of a police service.

A warranted officer means that he has or she has certain powers especially of arrest that is not available to other citizens except in special circumstances that they can also make citizens arrest.

Police officers are generally charged with the duty to apprehend criminals, prevention of and detection of crime, protection people, property both public and private, and assistance of the general public, in the maintenance of public order. Police officers swear to oaths, and have the power to arrest people and detain them for a limited time, normally up to 48hrs along with other duties and powers.

So you see? The people, the same society, and the same communities that sent the police officer to represent them enforce the very laws passed by their representatives, are the very people who break these laws. Doesn't this explain why the people and their police are always neck on neck?

I cannot continue please else the same people who sent me who love to break laws will come for my neck.

Nima Clashes: I ran for my life after hearing gunshots - Res...
31 minutes ago