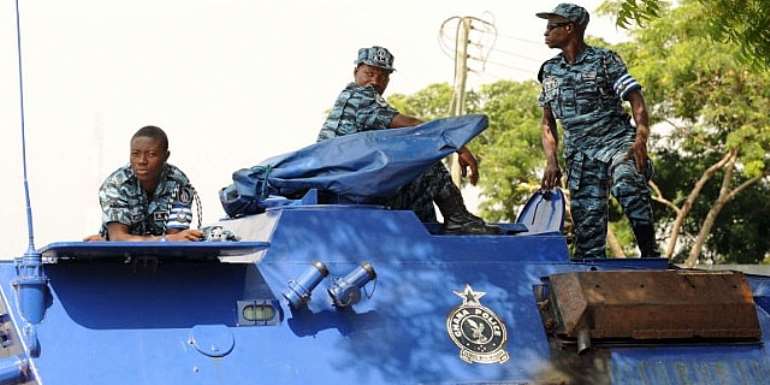 Keta (V/R)—Ghana Police Service’s use of inordinate brutality has, once again, been displayed in the blatant killing of 22-year old Atsu Nkegbe of Adina. The killing was occasioned by the protest of residents of the Adina community against the negative impact of Seven Seas Salt (SSS) Limited, on their livelihood, the environment and water resources resulting from the company’s operations.

Two other people, a pregnant woman, Enyonam Ackumey and Bright Katta (who is in critical condition at 37 Military Hospital) were also said to have been shot by the police in their indiscriminate targeting of unarmed demonstrators.

Facts available to Anlo Youth Council (AYC) show that the immediate cause of the protest by the community was the non-compliance of the Company to guidelines for environmental protection and agreements reached with the community on the management of the water resources and mitigation of the environmental impacts of the company’s operations on residents.

The company which initially registered as Kensington Industries Limited has reneged on several agreements reached with the constituent communities among which they were to develop a 300m2 piece of land into a fish farm; desist from tapping into ground water for their salt mining; source water directly from the sea for their operations; mitigate the impact of environmental degradation through best practices.

Altogether, the company has woefully failed in its community engagement process as it apparently has no policy to tackle the myriad of challenges prevailing in their area of operation, some of which have been as a result of their operations. Untold hardship has therefore been visited on the outlying communities including Adina, Sonuto, Kpedzeakope and their satellite villages.

Furthermore, in resolving what has clearly become a resource conflict between a company owned by affluent, well-connected foreign investors and a powerless community engulfed by abject poverty, the company has relied on the collusion of the law enforcement agencies, to shoot to death members of the community demanding accountability from the salt production company. There already exists a precedence of unprofessional conduct of the police with regard to operational procedures in dealing with the unarmed community of demonstrators.

The police actions that followed the clash are in flagrant disregard of their own rules of engagement in the case of unarmed civilians and against existing standards of modern policing methods.

The AYC and the people of Anlo are of the firm conviction that anytime there is civil conflict in our communities, the only means the security services, in particular the police, have of resolving the trouble is to shoot at the people using live bullets resulting in death and mortal injuries to unarmed residents.

This incident, coming exactly 10 years after a similar incident by the police in November, 2007, which left four people dead; and a similar intervention by the police in December, 2015 with one person dead and several injured at Sonuto, leaves much to be desired and evokes an almost sadistic image of the police service in discharge of their duties, particularly in the Volta Region

AYC condemns the barbaric acts of the police service and urges Ghanaians and members of the international community to also condemn the recent spate of brutalities and abuse of state power by the Keta Police Command against residents of Adina and Sonuto in Ketu South of the Volta Region.

Noting the increasing resort to the military as surrogates in the conflict and the brutalisation of completely unarmed civil populations protesting against the destruction of their source of livelihood, AYC further condemns this misuse of state resources and calls for the immediate withdrawal of the Army to the barracks. There is no war in Adina for which the mandate of the Ghana Armed Forces is required.

Anlo Youth Council (AYC), in this press statement requests the following stakeholders and duty bearers to do all in their power to investigate the conflict, bring those culpable to book and establish a framework for compensation of victims of police/state violence against the citizenry in Anlo, dating to November, 2007:

1. IGP and the police administration to ensure:

ii. An immediate service inquiry into the incident, circumstances leading to the killings and related issues;

2. Parliament of Ghana
i. To set-up a Parliamentary Committee of Inquiry into the killings, dating to December, 2015 when the initial conflict erupted;

ii. To call for the relevant documentation on the setting up of the Seven Seas Salt Company, including true ownership; circumstances surrounding the sale of land to the company; document the destructive impact of the company’s operations on the local Economy (livelihood); Environment (damages to water resources – underground and surface); Society (Quality of life) and establish the degree of injuries (Physical/psychological) sustained by the victims including death.

iii. Come up with recommendations for appropriate compensation for police killings and brutality meted out to the people of Anlo from 2007 to the recent police killings in Sonuto aand Adina.

3. Government of Ghana
i. The government of Ghana, as duty bearers for the protection of life, individual liberties and freedoms in the named communities, is bound to ensure the impartiality of all investigations, inquiries and recommendations aimed at seeking justice for those who died and the survivors of police/state violence in Anlo;

ii. To ensure impartiality and possibilities of tampering with evidence or obstruction of justice, the AYC urges the Government, through the IGP to cause the interdiction of all officers involved in the ill-fated shooting or connected with operations of the Salt Company.

iii. Government should take overall responsibility for finding out the true state of affairs with regards to operations of Kensington, now Seven Seas Salt including whether the proper regulatory instruments governing exploitation of natural resources have been complied with.

In the meantime, we urge residents of the affected communities to remain calm and to go about their normal duties while investigations continue to shed more light on the incident.

The leadership of the AYC wishes to assure the affected communities that under the mandate of the 1992 Ghanaian Constitution, it shall do all it can to ensure justice is secured for those whose human rights and personal liberties have been unjustifiably infringed upon.

This release is without prejudice to actions that the AYC intends to take in concert with like-minded organisations to secure respect for the human rights of our citizens and the rule of law in Anlo.