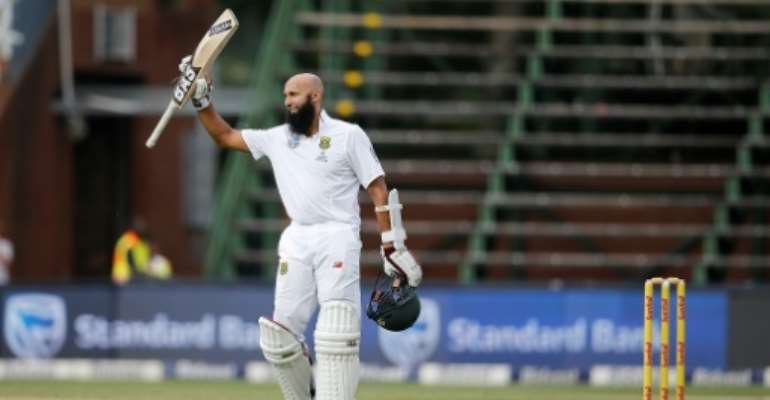 South Africa batsman Hashim Amla celebrates his century in his hundredth Test during the third match against Sri Lanka at Wanderers Cricket Stadium in Johannesburg on January 12, 2017. By Marco LONGARI (AFP)

Johannesburg (AFP) - Hashim Amla marked his 100th Test match with a century on Thursday, then said scoring runs after a lean period was more important than the occasion.

Amla was unbeaten on 125 after he and JP Duminy put South Africa in command as they reached 338 for three at the close on the first day of the third and final Test against Sri Lanka at the Wanderers Stadium.

Duminy made 155 in a third wicket partnership of 292 with Amla as the home side made a strong start to their bid to complete a 3-0 Test whitewash.

"I'm very grateful to reach 100 Tests, but to me the silver lining is to be scoring runs after the last couple of Test matches," said Amla.

Amla had gone seven Test matches and 13 innings without scoring a century and hadn't reached fifty in his previous 10 innings.

"I'm just glad to be playing this Test match but scoring runs was my focus," he said.

At the beginning of his innings he didn't look like a man set to break out of a slump.

He was dropped by Dhananjaya de Silva at gully off Suranga Lakmal when he had five and only scored six in the first 50 runs of his partnership with Duminy.

"When I first got in they bowled really well," he said. "I just stuck in and had a bit of fortune." 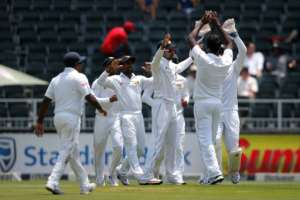 Sri Lanka celebrate the wicket of South Africa opening batsman Dean Elgar (not shown) during the third Test at Wanderers Cricket Stadium in Johannesburg on January 12, 2017

The left-handed Duminy was the dominant partner as he shepherded Amla through a tricky period.

"JP took the pressure off the team. For me personally I was just staying in my zone. When JP is on song he is a beautiful player to watch. His timing is immaculate and it is always a pleasure to bat with him."

Duminy was caught at second slip off Lahiru Kumara in the penultimate over of the day after hitting 19 fours in a 221-ball innings.

Amla, who took 109 balls to reach 50, stroked his way through his second half-century in 60 balls and by the end of the day had faced 221 deliveries and hit 16 boundaries.

Amla said he had never felt completely out of form during his run of low scores.

"That's the way the game goes sometimes. I always felt I was batting well. Fortunately the other guys were scoring runs."

With a reputation for always being calm and unflustered, Amla was asked whether at any stage during his career he had felt the game was too much for him. He thought for a moment and then answered, "No."

"In the first hour our guys bowled really well but they were unlucky. After lunch the wicket settled and got really flat. The ball got soft and it was easier for the batsmen to score runs."

But he paid tribute to Amla. "He was a bit under pressure at the start. After he got 30 runs he got his rhythm back and was more the player we know he is. After getting his fifty he was playing fluently. It was a great innings."

Amla became the eighth player and second South African after former captain Graeme Smith to mark 100 Tests with a hundred.

Duminy cruised to his half-century off 62 balls with ten boundaries and went on to his sixth Test century after facing 140 deliveries and adding four more boundaries. Duminy's previous highest score in three previous Tests at the Wanderers was 29.

Amla and Duminy came together when both opening batsmen, Stephen Cook and Dean Elgar, were dismissed within six balls when the total was on 45.

Cook and Elgar survived the first hour before both were out soon after the mid-morning drinks break.

Kumara was Sri Lanka's most successful bowler, taking two for 79.