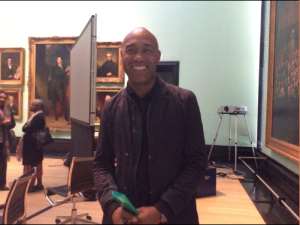 Historian Dr Gus Casely-Hayford will travel to Ghana in October to mark the centenary of the School of Oriental and African Studies (SOAS) .

The institution, based in central London, is staging a series of talks in Britain and further afield, to celebrate the 100-year academic reputation it has cultivated across Africa, Asia and the Middle East.

Gus is a London-born writer and broadcaster, who is best known for fronting BBC Four programme 'Lost Kingdoms of Africa'. He told MisBeee he was one of a number of SOAS alumni chosen to participate in talks across different African countries as part of the anniversary. Gus will be visiting Accra and will talk about Ghana’s heritage during the visit.

Childhood stories
Gus has spent much of his career charting and exploring African history - a passion that was nurtured from stories his Ghanaian relatives told him as a child.

"…they would sit me down and tell me stories and it just fired something in me,” he said. “I wanted to travel and I wanted to learn more about the history, so as soon as I got the opportunity, I travelled, wrote a PhD and began to investigate ways in which I could further my knowledge. The thing that really drove me was that I wanted to give other people the chance to learn about their history without them having to travel thousands of miles or to put in hundreds of hours of work. So that’s why I tried to write and make TV programmes – to try and bring them into people’s homes.”

Authenticity in films
Of course, the body of work that comes from the ‘Lost Kingdoms of Africa’ series is one that schools can naturally take advantage of and Gus welcomes this - as long as it is connected to education.

“I think it is fantastic particularly for a young generation many of whom feel very dislocated from the history of their own ancestry,” he said.

Re-telling African stories through film is another route that Gus applauds. While he agrees that there is a need for Black directors and producers to be authentic when telling these stories, Gus also believes these storytellers should be afforded some artistic licence and have the space to share more uplifting African narratives.

“.. whilst accuracy is absolutely important, it is important that we don’t terrify people into thinking that our history was nothing but appalling,” he said. “There are some fantastic chapters of African history that are deeply uplifting and those are the ones that I’d love to see young people given access to because if we want them to feel inspired by the past, we can’t just overload them with what are, of course, important but the terrible things. It is good that they know those but I think alongside them we have to give them access to some of the really inspiring and positive stories.”

Positive feedback
The positive feedback Gus received following the airing of the ‘Lost Kingdoms of Africa’ series is testament to this idea of sharing positive images of Africans and their history. The programme, which was first aired in January 2010 and ran for two years, generated positive feedback from Africans both home and abroad. The programme was shown in English-speaking African countries and was translated into French for the francophone market, as well as being available on the BBC World Service, Gus said.

Gus continues to champion learning and is currently working on a series for TV company Sky that will tell the story of British landscape art. He is also curating an exhibition for the National Portrait Gallery that opens in 2022. “The exhibition is going to bring all of the great portraits of Black figures from the 18th century, painted by some of the most important artists, and bringing them together for the very first time into one space,” he said.

Kirsty Osei-Bempong is a journalist and blogger at MisBeee Writes.