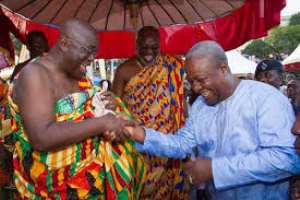 A Politician is someone who deserves to be respected most in this country .They are the ones who spend most parts of their human life doing the service of humanity and selflessly putting their lives on the table for the benefit of all .

These are people that cannot eat at any place? How would you react when you saw President Mahama or Nana Addo Danquah Akuffo Addo eating at your favourite chop bar (when they are not on a campaign trail).

I mean how would you react, should you see them at your base! My best guess is you wouldn't nurture the thought. How would you react when you get to see the naked picture(s) of any astute personality in this country .

I guess you don't expect to see such pictures because they are Politicians and must show an Honourable behavior ?

How would you react when you get to a drinking spot or a prostitutes' web , to see your Politician hanging around?

You will be surprised,I guess because you didnt expect to see him/her there .

We always say Public Figures and Public Officials have no private lives since most of the things they do hold public significance. I get saddened with that though.

Politicians are the most insulted set in this country .

Anybody and l mean anybody can just sit anywhere and rain insults against his/her Political Leader.

Often times, these people who don't even clean their teeth nor take their bath. Sometimes they can't afford a three - square meal for their family because they are loafer to provide for their family but these same people get the moral authority to sit on radio, television to insult anyhow and say whatever they feel like .

Now take a clear look at this ,why would someone who can't even afford to live a comfortable life insult someone who has made it in life .

Just imagine ,a young guy insulting to show how strong he /she is, as a young upcoming politician by insulting an astute Politician .

In every leader ,we must learn something
I learn human relations from John Dramani Mahama and learn boldness ,confidence and perseverance from Nana Addo Danquah Akuffo Addo and that is what the young ones must do .Learning from our leaders .

Why should you insult a politician anyhow because he has decided to sacrifice his life to serve you .

Do we even insult celebrities ,comedians - who are normally tagged to be fools ,actors - who depict their nakedness and all others who are not even up to the standard of politicians. I'm not saying we should but if we don't do so to them ,why should we insult Politicians anyhow?

The seemingly surprising part of it all is the fact that the ,4th Estate in the realms of affairs of a Democratic process of a country -Media, are basically those that help to propagate and entertain such ill -health and undeserving characters from childish and infantile beings .

Most so called journalist who are supposed to know better as well follow the same line by engaging in such devilish acts of insult. If this country will see any substantial development, it starts with a change in our attitudes.