Irony Of Inequality And Ogoni Peoples Struggle For Life And Land 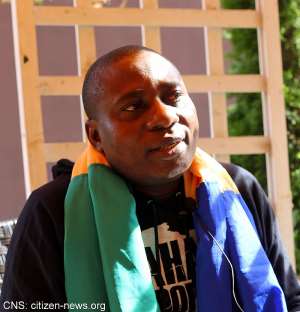 CNS): Even as the 193-Member United Nations General Assembly formally adopted the 2030 Agenda for Sustainable Development on Friday the 26th of September 2015, Akpobari Celestine, an Ogoni born human rights activist, National Coordinator of Ogoni Solidarity Forum Nigeria and a member of the CSO Partnership for Development Effectiveness (CPDE) Post-MDG Working Group, echoed concerns of deepening inequality and the consequences of unrestricted business behaviour in his country in a conversation with Citizen News Service (CNS) in New York during the UN Summit for the Adoption of the 2030 Sustainable Development Agenda.

The world, according to Celestine, is divided into two – developed and developing nations. Poor countries are increasingly being targetted as suppliers of cheap raw material to feed the industries of so called advanced economies only to produce finished products that will then be sold to the same developing countries but now with a sizeable profit. "The irony of it all is that we take away from those who have nothing, and give more to those who already have too much to begin with," Celestine said.

INEQUALITY BETWEEN AND WITHIN NATIONS

There is inequality between and within nations. Nigeria, one of the poorest nations in the world, is also home to billionaire Aliko Dangote whose net worth is estimated to be USD 18.3 billion. Celestine reminded us that while 2015 will be remembered for the launching of the global goals for sustainable development, it also marks the 20th death anniversary of the Nigerian writer and activist Ken Saro-Wiwa and 8 other Ogoni activists who were hanged by the then military government of Nigeria for campaigning against Shell Petroleum Development Company for the environmental destruction of Ogoniland.

Ogoniland is situated in Rivers state of Niger Delta. The Ogonis are an ethnic community, and the fertility of their land and rivers allows them to cultivate a self-reliant economy based on agriculture and fishing. But this situation changed radically when oil was discovered in the area in 1958, while Nigeria was still under British colonial rule. This discovery led to a partnership between Shell Petroleum Development Company and the Nigerian Government.

Even as Ogoni has yielded more than USD 30 billion in oil revenues, thirty years into this oil exploration has had a devastating effect on the environment, agriculture and the Ogoni way of life.

IRREPARABLE DAMAGE TO HEALTH AND ENVIRONMENT

“Nothing remained in terms of development, in terms of employment. People became poorer as the oil business polluted our land and water, thus taking away our livelihood. The land was no longer productive. The extensive dumping of oil residue and seepage, and the toxic flaring gases coming out 24 hours a day, 7 days a week, in close proximity of human habitation, caused irreparable damage to the health of the people and the environment,” Celestine said.

By 1993 the Ogonis were protesting against this total disregard of their health and livelihood. Those who were in the forefront of the campaign were framed up in murder charges, a military tribunal was set up that sentenced them to death and 9 of them were hanged on November 10, 1995. This execution served as a warning to those who opposed the regime’s policy of oil exploration, with scant regard for the people’s welfare. But Ogoni people, like Celestine, continued with their struggle.

In August 2011, a team from UN environment programme (UNEP) did an environmental audit of the land. The report which they submitted on August 4, 2011 was a mind blowing revelation of facts confirming that the water Ogoni people were drinking was contaminated with benzene, a known carcinogen, at 900 times of recommended levels, and that the soil was dead up to a depth of 5 metres due to oil pollution. The report stated that Shell had not met minimum environmental standards for its operations in Nigeria.

But until today, the government of Nigeria and the Shell company are yet to commence the implementation of recommendations of that report—to gather USD1 billion to start the cleanup.

Celestine also talks of issues of political marginalization due to which ethnic groups, such as the Ogoni, have been systematically excluded from positions of power. No Ogoni has ever become a Governor, or a deputy governor even in the local political setup. They are marginalized in their own state, let alone the rest of the country. And yet, as Celestine reaffirms, “We are a distinct ethnic entity with our own culture and language. But we are treated as slaves. We have to study other people’s languages in school, but not our own. We do not want this to happen and we want to preserve our culture and our language. We want to maintain our identity and pass it on to our children.”

Acknowledging that all the Global goals for development are inter dependent, Celestine fears that, “Climate change and environment has already affected my people very seriously and completely destroyed their livelihood of farming and fishing. Taking care of environment is very important to us and so is tackling the issue of inequality. Why do the majority of us have to work so hard to make money for an insignificant few?”

LAND GRABBING IN THE GUISE OF PPP

“In my community the issue of land grabbing is serious. In the name of Public Private Partnership (PPP), the government takes farmlands from thousands of local farmers and in turn gives it to a few individuals. The land which is their only hope, the land which they inherited from their forefathers - even that is being taken away by the government to allow access to and defend the interests of big businesses and corporations.”

The experience of Celestine and the Ogoni people of Nigeria attest to the growing trend of governments who seem to abdicate their roles in promoting social services, and instead outsource ‘development’ projects to the private sector. Furthermore, big businesses who secure contracts with governments are usually allowed free rein in exploiting the environment at the expense of local communities and indigenous peoples.

But Celestine remains indignant in saying "This is neither the time to give up in despair nor sit back and relax. It is our lives, our future and our destiny that is at stake here – everything is tied to the implementation of the global goals for development. The gap has to be bridged. We now need to walk the talk.”

Only time will tell if the UN Secretary General’s statement that “These goals are a blueprint for a better future…We must leave no-one behind," will transform into action for the likes of Ogonis and the commoners like you and me.

Video interview with Akpobari Celestine is online at:

(The author is the Managing Editor of CNS, and is supported by CSO Partnership for Development Effectiveness (CPDE) to provide thematic coverage around UN General Assembly where Global Goals for Sustainable Development are being adopted. Follow us on Twitter: @Shobha1Shukla, @CNS_Health and @CSOpartnership_ )