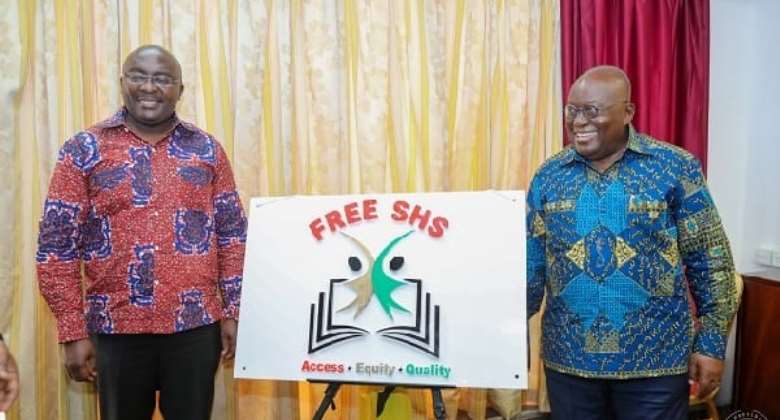 When you offer something to people free of charge, they don't value it because they don't know the importance of it. If parents were tasked to at least, pay part of the fees the government is struggling to pay for students to have their education, the students won't be fooling and the government won't also be toiling to sustain the policy, which is even affecting other sectors of the economy.

How do we use the resources and logistics, which are in our possession that we must use to work for the state? Your guess is as good as mine! The students would have known how much their parents suffer to pay their fees in school. But just like the lack of a culture of maintenance most of us in this country display, when we know something is free or belongs to the government, it's the same attitude these kids have towards the Free SHS Policy. After all, they or their parents don't pay anything for it. Seriously, we need to change the way we think in this country if not, even if Jesus Christ is made the president of Ghana, nothing will still change.

Many of these students get pregnant on campus but they can't be suspended from school. What are we teaching our kids? That they can be parents while they are at that level in their education, right? It's quite pathetic these days to see many young girls on our campuses heavily pregnant while attending school as if it's normal. At least, such students should always be sacked from school to deter others from emulating their immoral lifestyles. How can a pregnant child combine pregnancy with learning at that level? But all this is happening owing to the ill-thought-free education policy.

I would have, however, thought that the policymakers would have put measures in place to ensure that the policy has some quality in it, which in the end will benefit the nation. For example, if a female student gets pregnant, she is either sacked or asked to pay her fees till she completes school. This would have ensured that female students acknowledge the impact government is putting on their education and they must act well to complement the government to achieve the best results. Though I know the so-called human rights lawyers and activists would be against such a move, that would have put some sanity in the system rather than what is going on now. Every right must have a real possibility.

The government, through its policymakers, should also have placed a cut-off point for entering into the SHS and stopped the wholesale admission of students just because we want to push everyone to complete school at that level. This for me, it's more than that. I see the wholesale admission of these students merely as a way to gain their votes or that of their parents. But what rather happens is that; the academically poor students are mostly those who cause problems in our schools. Because they already know they can't make it in the end, they turn to destruct others. Therefore, they make sure those who want to learn don't get the opportunity to do that but rather suffer at the hands of these " I don't like school" students.

If the government says a particular grade can't send a student into the Free SHS Education Programme, the students will be forced to learn harder, and to get good grades and when they enter the SHS, they will know their future is at stake. The government should therefore bring back the promotional exams where if a student fails, she or he can be sacked or repeated. But when the students know no matter how poorly they perform, they will still go through the system till they complete it, what will make such students serious to learn? But the government doesn't want to repeat them because it's too expensive. Sacking them too will paint the government black. What a dilemma the government has found itself in!

Significantly, the government must also be blamed for not providing the necessary teaching and learning materials in our schools. Take, for example, the teaching of the English language without textbooks. If the students are to do reading comprehension or even summary, how will a teacher teach such topics without textbooks? As for those who have to do practicals without the needed materials, you can imagine the repercussions of the lack of teaching and learning materials they face. This has therefore allowed many students to idle. As the saying goes, an idle mind is the devil's workshop.

Since the inception of the Free SHS Education Policy some years now, there haven't been any textbooks supplied to our schools. However, the irony of the situation is rather that, the government supplies free uniforms and exercise books to students even though that one too isn't done on time or regularly. The result of the lack of these items in our schools is what we see every day on social media. Either the students are insulting the president, or a minister or they are immorally dancing on social media at the expense of their studies.

Our technical education is too porous, hence as a country, we lack a production sector that will allow us to do exportation to support our currency with foreign exchange. I sincerely, therefore, think even if we must provide free education, it should be towards technical and vocational education. Those who want to read other courses in the SHS aside from these two programmes can be supported partly. This will motivate many students to go into technical and vocational education and it will propel the country's economy through the production of items that can be exported.

Furthermore, nobody says the use of mobile phones by our students on campus is bad. However, knowing the kind of students we have in our part of the world, the government, GES, and other stakeholders should come out with definite policies on the use of mobile phones by our students, especially when on campus. Should students or should they not bring phones to school must be settled once and for all. But GES is suffering from indecisiveness when it comes to the imperative question.

Aside from the use of these smartphones to cheat during exams and waste the time of students on campus, the usage of these phones on campus also brings about theft cases which sometimes result in riots in many schools across the country. Because; some students bring expensive phones to schools which attracts others who don't have them to steal them and the problems start from there. It also makes students easily connect and plan acts of stealing, immoral fraternisation, and the like. The standard of written and spoken English has also dwindled drastically and it affects the academic performance of the students both internally and externally. GES, stakeholders, and the government must therefore be sure of what we want for our future leaders thus the students we have at the SHS.

I, therefore, will urge the government, GES, and other stakeholders to take a second look at the policy and bring in measures that will ensure it's the best we want to offer our future leaders. But if we continue to score cheap political points with our educational system, I can assure you we are gambling with the future of our youth and the nation will soon suffer the consequences.

Our educational certificates won't only be rejected by many institutions in the country and outside, but we will also be breeding hooligans who will one day cause a lot of mayhem in this country. Mark my words where you can easily delete them.

Finally, the government, GES, and other stakeholders must come together to fine-tune the policy to be devoid of any political interest but have a nationalistic touch and feel to it. The policymakers should also take a second look at the policy and see what measures can be put in place to give it the needed quality. Let's all agree that every policy has its shortfalls but when reviewed, the grey areas must be looked at seriously. Until this is done, I can assure you that the government is only wasting money on the programme while depriving the development of the other sectors of the economy.