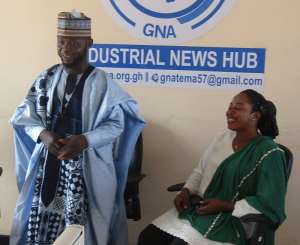 The Tijjaniya Muslim Movement of Ghana (TMMG) has appealed to religious leaders have been charged to come together device strategies to eradicate terrorism groups.

“…religious leaders are important in countering terrorism because of their unique position of authority, credibility, and ties with the community,” Alhaji Khuzaima Mohammed Osman, Executive Secretary, of the movement made call and explained that terrorism is not a battle between different faiths or different sects.

Alhaji Osman indicated during an engagement with the media monitored by the Communication for Development and Advocacy Consult (CDA Consult) in Tema that fighting terrorism is a collective effort and advised religious leaders to disassociate terrorism from religion.

He emphasized that "through corrective interpretation of dogma, formal, and informal religious curriculum and preaching, terrorism can be prevented".

He warned religious leaders that inaction on their part would bring suffering, death, and despair, stressing that "religious leaders must mobilize to take the lead in stamping out radicalization".

Alhaji Osman acknowledged the fact that society perceived the overwhelming majority of victims of terrorism as Muslims, however, Islam is one of the world’s most peaceful religions.

He stressed that interfaith groups are required to strengthen the ability of communities to resist forms of extremism by addressing community needs through collaboration, interfaith engagement, and solidarity.

He also dismissed Islamists as the footsoldiers of evil, with no religious legitimacy, effectively putting distance between Islam and the ideology that fuels terrorist groups like Boko Haram, and A Shabab among others.

Alhaji Osman also described violence and coercive use of power as a tool of control, stressing that it constituted oppression and therefore had no legitimacy in Islam.

He stressed that there were a lot of misconceptions surrounding Islam and domestic violence underlying that people who weren’t Muslims thought Islam condoned violence which was not the case.

Alhaji Osman noted that marriage in the Islamic context was a means of tranquillity, protection, peace, and comfort thus abuse of any kind on women was in conflict with the principles of marriage.

According to him, under no circumstances was violence against women encouraged in Islam, adding that, the Quran and Hadith encourage couples to live with mutual love, respect, and kindness.

He explained that any husband that insulted and raised a hand against his wife was like raising his hand and insulting God and his prophet.

Alhaji Osman noted the fact that domestic violence was a blight on society emphasizing it was a mental and social illness that went through every part of the society and therefore it was important for the citizenry and the society to address such issues in the country.

He beseeched victims of domestic violence to be bold and voice out to the necessary authorities to enforce the law on the culprits.

He advised Islamic Scholars and Imam to end the silence on the issue by discussing the issue of domestic violence in their sermons.