Tensions rise between Greece and Turkey over island military bases 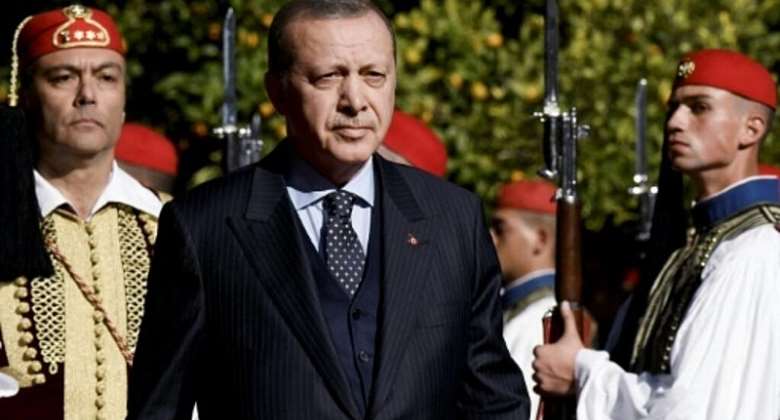 Tensions continue to escalate between Turkey and Greece over territorial disputes in the Aegean Sea. In the past, such tensions have been defused by US or European leaders, but this time there are fears they could be distracted by the Ukraine conflict.

Addressing supporters earlier this month, Turkish President Recep Tayyip Erdogan delivered a fiery speech against Greece, accusing it of threatening Turkey with its militarisation of islands close to Turkish shores and promising to respond.

"We don't care about you occupying the islands," Erdogan said, referring to Greek Aegean islands with military bases. "When the time, the hour, comes, we will do what is necessary. Like we always say: we may come suddenly one night." The nationalist crowd cheered.

Ankara claims Athens's building of military bases violates an international agreement that stipulates some Aegean islands should remain demilitarised. Athens says it's only protecting its people from the growing Turkish military threat.

'More than the usual tit-for-tat'

Greece and Turkey are no strangers to tensions, but some analysts warn this time could be worryingly different.

"I think this is significant and potentially very dangerous. It's quite a bit more than the usual tit-for-tat we're used to in terms of political accusations by both side," warned Asli Aydintasbas, a visiting fellow of the Washington-based Brookings Institute think tank.

"Clearly, both sides feel the other country is a threat. We are seeing Turkey and Greece accusing each other of airspace violations, but also Turkey accusing Greece of building military bases and arming the Greek islands that are adjacent to mainland Turkey, and Greece accusing Turkey of questioning Greek sovereignty over the islands. Potentially these are dangerous accusations."

Turkish and Greek forces went to the verge of war in 1996 over the contested uninhabited islet of Imia, or Kardak in Turkish. In the last few years, Athens has embarked on a major rearmament programme that has closed the military gap with Turkey, emboldening Greece to stand up to Turkish threats.

"A madness can happen anytime, like in Imia, way back in the '90s. Of course it won't last, but they are prepared for this possibility," said Cengiz Aktar of Athens University. "They are taking all the necessary military, political, diplomatic measures to make sure that nothing will happen."

The United States, building a series of bases across Greece, has also criticized Ankara's stance.

Erdogan, who's facing a difficult re-election next year with the Turkish economy in trouble, is accused of seeking to provoke a crisis with Greece to distract the electorate.

Greek Prime Minister Kyriakos Mitsotakis also goes to the polls next year and, like Erdogan, faces a challenging election, embroiled in a scandal over the phone tapping of political opponents.

"There will always be potential for politicians on both sides to exploit those issues, either in promoting their national interests or promoting their personal political interests at home," said international relations professor Serhat Guvenc of Istanbul's Kadir Has University. "Because this much tension probably will help them domestically."

Analysts warn that any confrontation would almost inevitably trigger European Union sanctions against Turkey, dealing a hammer blow to its weakened economy.

But for now, neither Athens nor Ankara appear ready to step back, with their evenly matched militaries facing off across the Aegean Sea.

Analyst Aydintasbas says that in the past, similar tensions were defused by the diplomatic intervention of the US or a European leader. But this time, she says, they may be distracted.

"There are no interlocutors; in Europe and the US, they're focused on the war in Ukraine and in containing Russian aggression. You don't also have a dedicated US role.

"I'm old enough to remember [US diplomat] Richard Holbrooke, who stepped in during the Clinton administration and was designated to prevent a similar escalation between Turkey and Greece. I don't see a figure as such, nor do I see a focus from Washington on keeping good neighbourly relations between these two countries. So it's quite problematic that there are no meditators or interlocutors in this current flare-up," said Aydintasbas.

The Turkish-Greek tensions turned fatal this month with the deaths of six refugees, including two babies who drowned in the Aegean while crossing from Turkey to Greece. Turkish authorities accused the Greek coastguard of forcibly sending the refugees back to sea, while Athens blames Ankara for failing to stop the crossings.

With bilateral tensions showing little signs of abating and neither leader seemingly interested in stepping back, the fear is these latest deaths in the Aegean may not be the last.