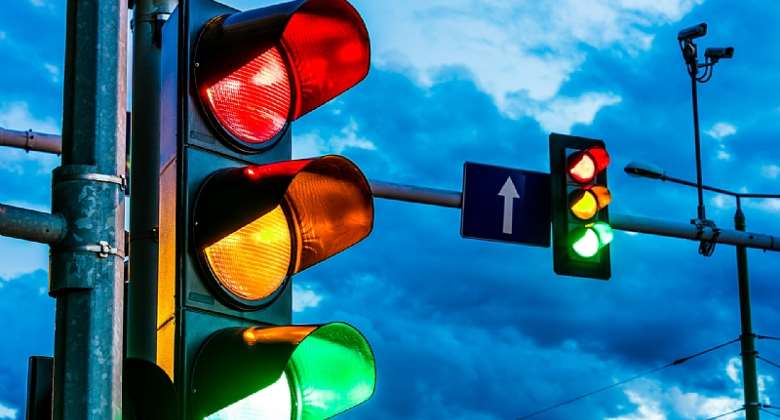 Does anyone ever pause and ponder traffic lights and traffic signals? And would it be weird to know that I do? In a city as quickly growing as Accra, one would think it would be something we did more often. Imagine the exceedingly high levels of carnage and chaos that would ensue if we woke one day and traffic lights and signals had disappeared from our cities. Between the commercial and private vehicles, the motorcycles and bicycles, pedestrians and even baby walkers, the traffic and confusion would be scores worse than the China National Highway 110 traffic jam (Wikipedia contributors, 2022) that began on August the 13th, 2010 and slowed thousands of vehicles for more than 100 kilometres and lasted an astounding 10 days!

Traffic lights first appeared (for public use) 154 years ago in 1868 in Parliament Square in London to reduce the number of policemen needed to control traffic. The genius invention that has saved more lives and livelihoods than we can ever hope to quantify has several variated applications. According to some experts, traffic lights have a general purpose, a specific purpose, and a more diversified focus that includes the use of big-picture road safety signs.

The general, specific, and diversified purpose

Concerning the elaborated and expanded purpose of traffic lights and traffic signals, experts, ELTEC Corp, documented it as such:

From managing travel times to preserving safe roadways, the majority of traffic signals are designed to keep cars, pedestrians, cyclists, and anyone else using the road safely. These signals might be anything from warning signs to streetlights, from complex to simple, all for the sake of keeping people in their lane. The idea here is to limit the speed and volume of traffic to safe levels by speeding up or slowing down traffic along the whole span of the road in question.

When it comes to intersections, crosswalks, school zones, and other places where there’s a good deal of both vehicular and foot traffic, traffic signals help communicate potential risk areas for both drivers and pedestrians. The signs that let you know a stoplight is around a curve, for example, prevent crashes or vehicle-pedestrian collisions by alerting drivers of a sudden or unexpected stop or slow down on the road. Generally, this is about managing anywhere that roadways and traffic might bump up against non-traffic areas – city centres, neighbourhoods, or anything that isn’t a long barren highway.

Finally, traffic signals also play a role in limiting the amount and intensity of accidents that do happen. People aren’t infallible, so accidents happen even in some of the safest environments. In situations like this, limiting speeds or designing a series of signals to slow or stop traffic can at the very least reduce the impact of accidents that do happen. Practically speaking, this usually looks like speed limits or restructuring of lanes and major signals in highly trafficked areas that are more prone to accidents.“

“Of course, over the years, traffic signals have evolved significantly to accommodate a wide variety of more particular uses. As neighbourhoods and roadways expand to cover more areas and weave through more of where we live, more specific and detailed traffic signals become necessary…In many cases, there’s a fairly homogeneous traffic light system in place, but in some cases, more specialized equipment makes sense. Specialized doesn’t necessarily mean complex, of course. Something as simple as a sign for deer crossing is a perfect example. It’s just a sign, but it’s specialized for areas susceptible to deer. It might also be more complicated of course, such as an RRFB that allows for an improved level of pedestrian and roadway safety in places where standard signage or signal intensity isn’t sufficient.“

“Looking forward, as people rethink the design of cars and cities to incorporate automation and AI, like self-driving cars or more technologically advanced public transportation, traffic signals will have to evolve even further. To account for increased speeds, more or less human interaction, and the shifts in urban design, we may see completely new traffic signals or unexpected evolutions of traffic signals that already exist.”

“Of course, traffic signals work in tandem with civic design to increase safety. In much the same way that traffic signals change to meet the needs and requirements of different roads and urban design, the way people think about urban design will change as well. In some cities, a push towards more bike lanes necessitates signage and signals that account for increased bicycle traffic. In other cities, a set space in the middle of town may be designated for only pedestrian traffic, or places that are accessible only for public transport“ (The Purpose of Traffic Signals | ELTEC, 2019)

Now, there is a myriad of reasons traffic lights, signals, and signs would malfunction or simply be damaged. One of the most obvious and predominantly the usual suspect is bad weather conditions. A good amount of strong rain and very heavy winds go a long way in rendering traffic lights, signals and signs out of service and use. In Ghana, we can expect a series of malfunctions as we dive into the rainy season - A note to all and sundry to remain extra vigilant. Of course, another reason they may malfunction includes situations in which the electric poles or power grids supplying them (the traffic lights and signals) power also malfunctions. Associated reasons such as blackouts and brownouts. There are also recorded incidents in which people have vandalised them (the traffic lights, signals and signs); some people have even gone so far as to drive their vehicles into them. Additional reasons include tampering, power surges which cause them to short-circuit; old equipment deterioration; maintenance issues; the dumping of trash in traffic light crevices, and other unknown reasons.

Who is responsible for repair and maintenance

So really, who can we confidently point to or refer to whenever one of our traffic lights, signals or signs needs of repair or replacement? According to the structure of management surrounding it, there are indeed several governmental bodies and at least one private firm in charge of the care, maintenance and repair of our traffic lights, signals and signs. Concerning those involved, the following bodies/people have been cited, and hold different levels and degrees of responsibility:

According to an article published by Graphic Online, the following outlines at least a surface view of the multiplicity of authorities and the relative shared responsibilities they carry:

“The Department of Urban Roads (DUR) identified vandalising controllers, stealing cables and throwing refuse into controllers as some of the challenges affecting the functions of traffic lights.

The DUR again stated that they are responsible for allocating funds and maintaining the traffic light, while Private Firms on contract manage it.

The (Motor Traffic and Transport Department (MTTD) is responsible for arresting drivers who break down the traffic lights.

Surprisingly, the MTTD, despite being at most junctions and intersections often seems not to have an upper hand in monitoring traffic lights.

ACP (retired) Tandoh, a retired boss of the MTTD, revealed in a piece of online news that it was expected of a driver who crash down a traffic light to report to the police for investigations after which the Ghana Highway Authority (GHA) takes over to replace the traffic light.

Thus, the DUR, the MTTD, the GHA and other private firms all admit to playing a role in ensuring safety on our roads“ (Who Monitors Traffic Lights?, 2018)

Now that we have this information, albeit somewhat inconclusive in certain areas as a result of the lack of sufficient data, we can all of us be better informed and take more responsible approaches to ensure our taxable income is responsibly used, and we and those we care for are all the safer because we are not spectators and complainers, but citizens who understand the spirit of collective action, ownership, and what it means to be a citizen!

I hope you enjoyed the read. Hit me up and let’s keep the conversation going! I read all the feedback you send. Also, feel free to throw at me topics you’d like to read or hear my thoughts on. You can always head to my Calendly at calendly.com/maxwellampong or connect with me your own way through my Linktree: https://linktr.ee/themax.