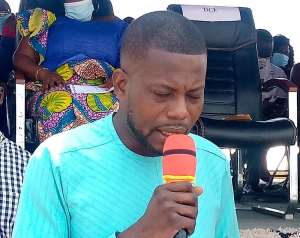 Hon. Micheal Donkoh, District Chief Executive (DCE) for Amansie Central in the Ashanti Region has said residents should blame some unscrupulous people for the galamsey activities in the area.

He said he has no connection to any illegal miners in the area.

The DCE insisted, "I have not sold any concession or any land to someone to operate illegally, so what is my involvement in illegal mining?"

He continued, "I don't have connection with any of the illegal miners hence the community should blame them, not me."

The DCE noted that illegal mining had caused extensive damage to the environment, especially water bodies and farmlands, and threatens food security with debilitating socio-economic consequences.

According to him, he is ever ready to expose the perpetrators.

He has therefore thrown out a challenge to anyone with evidence of his involvement in galamsey activities in the Amansie central district or any other place to provide it.

His denial is a rebuttal to a series of publications instigated and influenced by some individuals within the NPP in the Amansie central district allefedly plotting against him since he assumed office barely nine months ago.

In an exclusive interview with newsmen to react to allegations of his involvement in galamsey activities in the Amansie central district, the DCE further hinted that the Assembly's task force team which he came to inherit is up to the task and working assiduously to make sure illegal miners are tracked and arrested.

He disclosed that he has not instructed the assembly task force team to engage in extortions of monies as some individuals are claiming in the media.

He added that the Assembly will therefore not shield anyone involved in the illegal business regardless of their political persuasion or social status.

"We will not spare anyone engaged in illegal mining but allow the law to take its course to serve as a deterrent to others. We wont shield anyone," the DCE warned.

He called on traditional leaders to support the government to stamp out the activities of illegal miners.

He said not only politicians but also traditional rulers, security agencies, and even ordinary people must have a role to play in fighting the galamsey menace.

Hon. Micheal Donkoh also advised the illegal miners to use the laid down procedures to acquire a license.

He calls on Chiefs to support the fight to protect the environment for generations yet unborn.