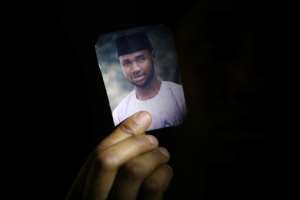 Mr Mubarak Bala has languished under illegal detention for two years despite court orders for his immediate release. During this period, the Islamic community, which apparently controls the government and social structures of the State have made significant threat and intimidation to compel him to admit guilt when it is apparent to all that he is innocent.

Mr Bala is a chemical engineer, husband and father, and whose travails began in 2014 when he announced on his Facebook page that he is no longer a Muslim, but an atheist.

He should not have done that? He should have respected the sensitive nature of his community? Apparently, this public declaration saved him from being tried in a Sharia court. It also saved him from living a life of pretence as every Muslim is expected to observe the compulsory daily rituals that define Islam. He was no longer obliged to pray 5 times daily and to fast during Ramadan.

But the religious community wouldn’t have it. His immediate family were the first to strike. He was accused of being insane and forcefully admitted into a mental institution for 18 days. During this period he was given medications to ‘correct’ his alleged mental defects until the atheist community in Nigeria

was able to secure his release. From then onwards, he became a marked man. He received death threats regularly from members of his former faith.

Before his deconversion, he was a pious Muslim who attended the Saudi funded Islamic Foundation, Aliyu Bin Abi Talib primary school. He was trained in the Wahhabi Islamic thought, with a jihad ideology and later attended an all-Muslim private science secondary school, Hassan I. Gwarzo, in Kano State, where Islamic (Qur'anic) study is given a very high priority.

Mr Bala was arrested again in April 2020 for making posts on Facebook against Islam. Despite court orders to release him on bail, the police authorities ensured that he was kept behind bars for two years in Kano. On April 5th 2022, against the advice of his lawyers, he pleaded guilty to the charges of making inciting statements on his Facebook page and the judge immediately passed a 24 years sentence.

It is worthy to note that these posts were not taken down by Facebook for breach of community standards or hate speech, nor was the claim proven in court. Mr Bala pleaded guilty because he might have suffered a mental meltdown and wanted to end the charade by giving in to the pressure from the kangaroo court.

As a community for atheists, it is sad to announce that a large number of atheists and humanists living in northern Nigeria(officially regarded as religious minorities) constantly face human rights violations. Despite their using anonymous identities online, we keep seeing fanatics making death threats. It is not enough that the Islamic faith controls, the mainstream media, public life, schools, as well as government, there is a deliberate attempt by the so-called custodians of the faith to control the thought process of ordinary citizens. We have heard reports of how young men have been arrested in Kano for playing “worldly music” and wearing worldly haircuts and clothes.

You have probably heard worse. Christians have been killed by mobs for making ‘inciting’ speeches or payers against the Islamic faith and we have all witnessed the accused being exonerated and charges quashed in court.

It was John Stuart Mill, a utilitarian philosopher, who opined that for evil to triumph, it is necessary for good people to do nothing.

Mr Bala is a good man who tried to do something about the rise in fanatical adherents to the Islamic faith with literal and destructive interpretations of a 9th-century religious text.

But it is apparent that he cannot ﬁght alone. He needs everyone with empathy and conscience to join this ﬁght for a better world. We can begin by being united in the demand for his freedom.