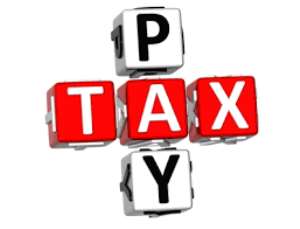 Ghanaians are in their majority noted for their unwillingness to pay taxes to the government and will avoid such payments if they had their own way. In Ghana, not about 30 per cent of the population or those eligible for paying taxes, do indeed pay taxes.

I will briefly mention both direct and indirect taxes to help me better home in my message to fellow Ghanaians.

Direct taxes are the tax you pay on your income, however it comes, unless you are exempt from paying tax. Indirect taxes are those that you pay on consumption of goods and services produced in the country, through “value added tax” (VAT). It is the indirect tax that captures almost all Ghanaians as far as they purchase goods and services in the country on which VAT is attached.

My fellow Ghanaians are noted for always clamouring about the non-existence of many essential developmental projects and services but for which they constantly pile pressure on the government to provide them for their comfort, all things being equal. However, these are the same people who do not want to pay their due taxes.

Payment of taxes to the government is the number one source of income generation to any government of a nation to help with the realisation of the very basic essential developments that the citizens of the nation need. It also goes to pay for the public service workers. This is so, especially, in countries where businesses and major revenue-generating projects are privately owned but not public or government-owned.

In Ghana as I am aware of, for the fact of being a native of the country and knowing the character of the people, same as I know the back of my hand, paying tax is to the Ghanaian like forcing a bitter concoction down their throat. Nobody loves swallowing anything that is bitter. However, for the treatment of illnesses and your healthcare, one is at times obliged to swallow bitter pills or concoctions.

Similarly, payment of taxes is a necessary evil, if it is evil at all. Without taxes, the government cannot provide the good roads, good hospitals, better education for all, good electricity, potable pipe borne water, etc., that we always demand from her. If this is so, why do we hate paying taxes?

Most Ghanaians are Christians or religious, I should think. If yes, what do they make of the following bible verse – Acts 20:35 – “In everything I did, I showed you that by this kind of hard work we must help the weak, remembering the words the Lord Jesus himself said: ‘It is more blessed to give than to receive.”

Yes, there is a blessing in giving. If you give part of your income to the government in tax payment, the government can use it to provide you with the essential developments you may need. It can use it to employ security personnel, thus police officers and soldiers, to protect you and the country against external aggression and criminals, respectively.

The nature of the tax can become an issue but as long as it is fair and captures most or all of the eligible tax-paying people in the country, we must be ready to pay it.

A government is elected not to always yield in to the demands of the people that may be frivolous but rather to listen to the people and at the same time take tough decisions that may not sit well with some people but in the long run will be in the best interest of the nation and the people. Yes, in a democracy, the view is held that the majority always carries the vote. However, the exception to this rule goes, “It is not always that the majority is right” Therefore, the fact that many people may be against say, the “e-levy”, does not necessarily oblige the government to abandon it altogether as being bad.

Those accusing the Finance Minister Ken Ofori Atta (Honourable) of being lazy by seeking to raise revenue for the government through the electronic transaction tax (e-levy) but had better raise same revenue through other forms of tax, however, without suggesting any, how sensible is their criticism, if I may ask?

Indeed, Ghanaians are very difficult people. No wonder that some people are teased for always saying, “Oyiwa don” to others but without ever doing unto others things that will earn them reciprocal “Oyiwa don”

Does the bible not mention the need to pay tax as in Matthew 22:15-22, despite whatever a reader’s opinion may be? It says in Matthew 22:15-22 – “Then the Pharisees went and plotted how to entangle him in his words. And they sent their disciples to him, along with the Herodians, saying, “Teacher, we know that you are true and teach the way of God truthfully, and you do not care about anyone’s opinion, for you are not swayed by appearances. Tell us, then, what you think. Is it lawful to pay taxes to Caesar, or not?” But Jesus, aware of their malice, said, “Why put me to the test, you hypocrites? Show me the coin for the tax.” And they brought him a denarius. And Jesus said to them, “Whose likeness and inscription is this?” They said, “Caesar’s.” Then he said to them, “Therefore render to Caesar the things that are Caesar’s, and to God the things that are God’s.” When they heard it, they marvelled. And they left him and went away”.

I find it sheer stupidity on the part of some members of NDC with their parliamentarians inclusive, to have polarised the e-levy, taking such an intransigent opposing stance to result in fisticuffs and infliction of injuries on some Members of Parliament inside the parliament house. They claim to act in that bushman’s attitude all in defence of the people against the harsh economic conditions prevailing in the country as though they, the NDC, could do better.

Some of the NDC guys are even threatening to kill some MPs should the e-levy ever sail through to become law. How lawless, irresponsible and potential murderers those issuing such threats are! Why are they so desperate to come to power, as corrupt, visionless and incompetent as they are?

I shall be back to treat this topic of taxation again and into detail but not without leaving you with the message in the underlying video about the need to give. How do you give if you refuse to pay taxes but expect others to pay taxes, or the government to go on borrowing spree, to provide you with all the good things you need in life free?

Please, don’t see the video as magic but the final message of the benefits of giving so contained in it.