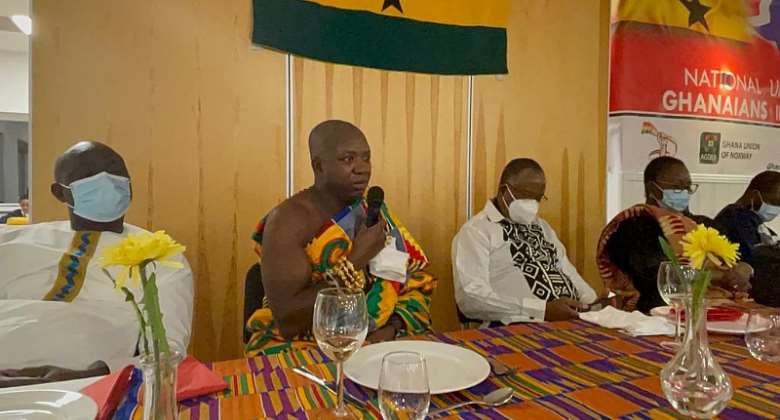 Nana KotaÂ  Ntiamoah (with microphone dressed in cloth) speaking during the inauguration of the NUGN in Bergen. Seated with him are the Ghana's Ambassador to Norway, Jennifer Lartey and her team from the Ghana Embassy, Oslo

To him, Ghana has many ethnic groups and as such, the diverse cultural identities of the country.

That to him is reflected in Ghanaians living in abroad, particularly in Vestland and other parts of Norway but he believes that if Ghanaian's resident in Norway would continue to realise there is unity in strengthen, they would continuously be shielded in their culture irrespective of where they are.

Nana Kota, who is also Otumfoɔ Brempɔn Sabin Akrofuom Nkɔsoɔhene back home in Ghana under Manhyia Palace, was giving his advice during the inauguration of the National Union of Ghanaians in Norway (NUGN) in Bergen, western Norway.

He stood in for the traditional authority of Ghanaians resident in Norway to support the Ghana's Ambassador to Norway, Jennifer Lartey to officially declare the NUGN duly inaugurated.

Nana Kota who has been resident in Norway for the past three decades, noted that Norway as western country was a multi-cultural society.

And that he believes in the midst of multi-cultural identities, it takes a lot of circumspection to continue to clinch to one's identity or cultural background.

"Norway has its own culture. Besides, Norway is a society with multi-cultures. Different people from different races and cultures are here in Norway. As Ghanaians, do not forget your culture as you integrate with the Norwegian society. As you study, work, do businesses and other endeavours, remember to preserve your culture", he counselled.

He further counselled by metaphorically tapping into the African proverb that: "The strength of the broom is in its numbers". "And that as Ghanaians resident in Norway, you can still come together and be united in the midst of your diverse culture backgrounds as you form this national union".

He entreated the Board of the NUGN to ensure there is always togetherness as they lead in networking and collaboration of the various local unions, adding that "do not let us down".

He commeded the Ghana Embassy of Oslo for its initiative to call for the formation of the National Union and its subsequent inauguration.

He extended his commendation to all local unions for coming together to form the national union and applauded the Ghana Union, Vestland in particular, for hosting both the NUGN inauguration and Christmas party in Bergen.

According to the Co-ordinator of the Board of the NUGN who doubles as the Vice President of the Ghana Union Vestland, Gifty Ohenewaa Nordbø, plans are close for the board to soon inaugurate a new local union for Ghanaians in Tromsø and Harstad, possibly after new year.