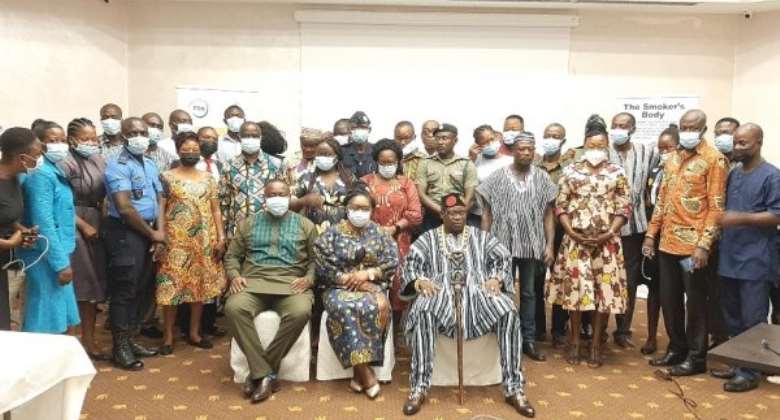 Dr Olivia Agyekumwaa Boateng, Head of the Tobacco and Substances of Abuse Department of the Food and Drugs Authority (FDA) says the use of shisha is not an alternative for cigarette and called on the youth to desist from using it.

She said shisha inhalation had become very popular particularly among the youth with the misconception that once the toxins contained in shisha passes over water before it is inhaled, it would be safe devoid of health risks.

“We have aggressively been doing public education for people to know that they are not safer forms. In fact if you inhale shisha in a sitting for an hour, it is equivalent to about 100 cigarettes. It goes directly to the lungs.”

She said there was the need for multi-stakeholders approach for tobacco control, “We think the approach should be with locally made solutions. Every Region will have its peculiarities in line with the tobacco control provisions, and we think that other stakeholders may even do it better than we are doing.”

Dr Mrs Boateng emphasized that none of the types of tobacco and their substitutes including nicotine gum, nicotine lozenges, snuff, cigar, nicotine pouches and cigarettes were safe as they may contain addictive substances.

On the prevalence of tobacco use, she said information from the World Health Organisation (WHO) indicated that more than 80 per cent of 1.3 billion tobacco users globally, live in low and middle income countries where the burden of tobacco-related illness was heaviest.

“Globally, tobacco kills more than eight million people annually. More than seven million of these deaths are from direct tobacco use and around 1.2 million are due to non-smokers who are exposed to second-hand smoke,” she disclosed.

Dr Joana Ansong, the World Health Organisation (WHO) Focal Person for Tobacco Control in Ghana, said the WHO Ghana, had been an instrumental partner in the design and implementation of the several tobacco control interventions beyond the passage of the Act 851 and Legislative Instrument (L.I) 2247.

She said the WHO collaborated with the FDA to achieve the implementation of Graphic Health Warnings on tobacco products, public education programmes in raising awareness on the dangers of tobacco use, ratification of the protocol to eliminate illicit trade and tobacco products in Ghana among others.

Naba Clifford Asobayire V, the Paramount Chief of the Kologo Traditional Area who represented the Upper East Regional House of Chiefs (UERHC), told the Ghana News Agency, after the meeting that they bemoaned the use of tobacco and other addictive substances among the youth.

He said the Region's House of Chiefs would collaborate with key stakeholders in the Region to educate their subjects in their traditional areas to ensure that the use of tobacco was drastically reduced if not stopped.