By Mina OIKONOMOU with John HADOULIS in Athens 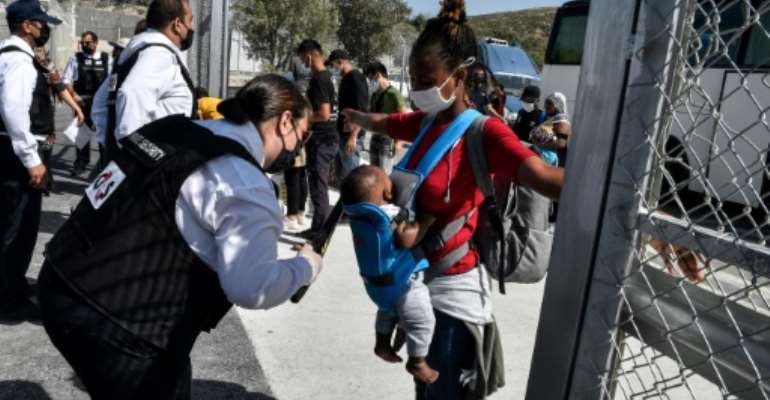 A double barbed-wire fence surrounds the camp on Samos island, a facility for 3,000 people that also has surveillance cameras, X-ray scanners and magnetic doors. By LOUISA GOULIAMAKI (AFP)

Greece on Monday moved asylum seekers to the first of new EU-funded "closed" facilities on its islands, built to replace chaotic and crime-ridden informal camps but raising hackles of activists who say that controls on access make them into prisons.

Two rows of barbed-wire fence surround the new Zervou camp on the Aegean island of Samos, designed to house 3,000 people and which also has surveillance cameras, X-ray scanners and magnetic doors.

The new facility opens just over a year after fire destroyed the notoriously overcrowded Moria camp on Lesbos, then Europe's biggest migrant settlement.

The blaze sparked a chaotic exodus of more than 12,000 people, drawing global attention to Athens' struggle to cope with the massive wave of migrants fleeing war and hunger, as well as the tensions this created on islands that are a major jumping-off point for those seeking refuge in Europe.

"We are worried about a new wave, either from Afghanistan or from the four million migrants that Turkey holds," East Samos Mayor Georgios Stantzos told AFP.

While the scale of the new camp was "frightening", he said, it was a "lesser evil" compared with the uncontrolled and overwhelmed system in place now.

Critics charge the controls -- which include night-time curfews and a detention centre -- turn camps into prisons for some of the world's most vulnerable people and reflect a government hostile to asylum seekers.

The Samos camp will serve as a pilot for the other so-called closed and controlled access facilities. By LOUISA GOULIAMAKI (AFP)

At the entrance of the new camp, police lined up residents in front of the magnetic steel gates, checking for weapons or other dangerous items.

Migrants were handed clean bedsheets, and shown how to use the magnetic cards and fingerprint readers to get in and out.

Afghans Aadela and her husband Ahmad Rezaei were among the dozens boarding buses on Monday to move to Zervou, hours after a fire torched a part of the Vathy camp where they had been living for two years -- in reality a slum outside the town of that name in Samos.

"We have no luck," said Aadela, straining under a large sack.

"The new camp is (a) problem, it's very far away from the city, I don't like it there,' said her husband.

Some asylum seekers held boxes containing cats from the old camp, where rats were an ever-present menace.

Of about 400 people at Vathy, 270 have said they want to move to Zervou, Manos Logothetis, general secretary for asylum at the Greek migration ministry, told AFP.

As many as 200 people would be moved on Monday, with the remainder the following day, Logothetis said.

The Samos camp will serve as a pilot for the other so-called closed and controlled access facilities.

It includes a detention centre for migrants who break the rules, or whose asylum claims have been rejected and are to be deported.

Occupants will only be able to enter via fingerprint scanners and electronic badges.

Late on Sunday, a fire broke out in an abandoned part of the Vathy camp -- though the ministry said nobody was hurt. By LOUISA GOULIAMAKI (AFP)

Gates will remain closed at night and disciplinary measures await those who return after 8 pm.

The EU has committed 276 million euros ($324 million) for the new camps on islands that receive most of the migrants coming by sea from neighbouring Turkey.

The local community, which had for years demanded the relocation of all the migrants to mainland Greece and Europe, has also opposed the construction of the new Zervou camp.

The Vathy camp on Samos was originally designed to hold about 680 people but at some point it ballooned to more than 7,000.

Samos residents have spent years demanding all migrants be relocated to the mainland. By LOUISA GOULIAMAKI (AFP)

Some people "think that it's prison, but I don't," said Didier Tcakonmer, 28, from Cameroon, who has spent the past two-and-a-half years in Samos.

"It will be better than here -- no mosquitoes, no rats," he said.