Article 71 emolument: do politicians deserve that? 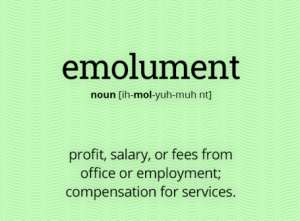 Article 71 of the Ghanaian Constitution is famously known for the fat salaries and privileges it grants to the political elites—namely the President and Vice, Speakers, and MPs, Chief Justice & Justices of the Superior Court of Judicature, Council of State Members, Auditor General, EC Bosses, and others—as compared to the larger population.

Prof. Ntemoah and her committee meant well in considering 10 guiding principles in recommending the emoluments and privileges of key public office holders who steer the affairs of the state.

That includes equity and fairness, the dignity of the position, the risk associated with the office, responsibility and requirement from the office, motivation to attract highly qualified people to higher offices, reasonability, and ability to pay.

While the ordinary taxpayer on minimum wage as announced in 2021 receives GH¢ 300 per month, the head of state on the apex of the social structure—the first gentleman of the land and the chief policymaker—receives 76 times more (GH¢ 22,809/month). Ministers State and MPs on the other hand receive 53 and 43 times more (GH¢16,195 & GH¢12,971), respectively.

That excludes allowances, facilities, and privileges. In the case of Ministers of State, they are entitled to residential accommodation or 20% of consolidated salaries in lieu of housing, 24-hour state-sponsored security, four-wheel drive, and a saloon car with insurance maintenance and chauffeur driven.

On a business trip abroad, the state caters for a business class ticket, 4-star hotel, and per diem. They are also entitled together with their spouses and 4 children to state-sponsored medical and dental services. After service, the Committee recommends we pay them four months’ salary each year they served in gratuity.

I don’t think this is entirely outrageous if these policymakers live up to the expectations of the responsibilities and requirements assigned to them by the law of the country.

As the saying goes, to whom much is giving, much is expected. At the heart of the Ghanaian Constitution is Chapter 6—the Directive Principles of State Policy which enjoins the political class to promote fair and realistic remuneration for production and productivity by the Ghanaian people and eradicate corruption to promote the welfare of the society. Chapter 13 of the constitution also vests parliament the power to control and monitor the use of public funds to enhance the welfare of the Ghanaian people.

This hasn’t been achieved since 1992, yet our politicians continue to ask for more salaries, privileges, and immunities. How do you juxtapose these fat salaries and privileges with the actions and inactions of the same state actors that cost taxpayers some GHC4.9 billion in judgment debt between 2000 and 2021?

The Auditor-General in his annual audit report in 2019 alone found irregularities in public expenditure to the tune of over GHC 13 billion. Needless to talk about the supervision of the grand scheme that collapsed the banking sector, costing the taxpayer some GHC 21 billion. How have our leaders received so much yet supervised a massive distraction of water bodies and forest reserves through galamsey in the last two decades?

The current emolument arrangement turns elective public service as a money-making venture. The worldview of politics in our part of the world among the youth is that it is the quickest avenue to make money. In reality, politics is a community service where people who have the technical know-how, or have already made it in life, or willing to volunteer, come together to build a nation through selflessness.