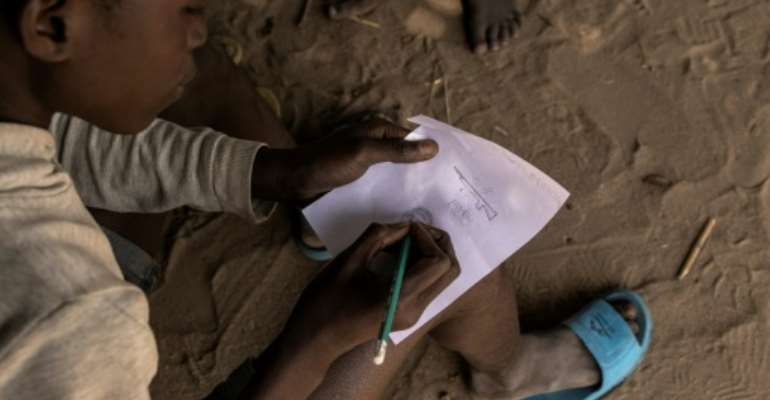 Mental health workers encourage the children to draw anything that comes to mind. By JOHN WESSELS (AFP)

Twice a week, dozens of Mozambican children gather under the shade of a big mango tree for what looks at first glance like a community play date.

But they are not there for fun, rather for solace and healing after witnessing shocking atrocities committed by jihadists in the north of the country over the past three years.

Mental health workers ask the children -- some of them chubby toddlers who look outwardly happy -- to draw anything that comes to mind.

Seventeen-year-old Alberto Almeida sits behind the smaller children, holding his paper on his right thigh, artfully sketching an assault rifle, then drawing a red X over it.

He captions it "noa khaphutha", which means "no gun" in his native Makua language.

Still haunted by an attack on his village in Bilibiza in the coastal Quissanga district, eyes downcast, Almeida recounted tersely the day in late 2020 when he fled.

"I was forced to leave my home," he said, adding that he wants to return, complete his studies and train as a teacher.

Some drew military helicopters, while others sketched the makeshift structures that have become their new homes, built from bamboo reeds and mud at the dusty camp. By JOHN WESSELS (AFP)

An entire section of the village went up in flames, causing residents to flee for their lives, he said.

The torching of homes -- as well as the beheading of civilians -- is the calling card of the militants linked to the Islamic State group (IS) who have ravaged parts of Mozambique's northern Cabo Delgado province since 2017.

Separated from his parents and his two sisters and a brother who were captured by militants, Almeida walked for five days. By the time he reached the main port of Pemba, his feet were bruised and swollen.

He now lives here in the Metuge camp, 50 kilometres (30 miles) west of Pemba, as does an uncle.

The camp shelters more than 30,000 people who were uprooted from their homes by the extremist violence, which has killed more than 2,800 people.

In all, the conflict has displaced more than 700,000 over the past three-and-a half years, including nearly 57,000 just from the recent attacks on Palma.

The trauma inflicted on the children from witnessing the extreme violence is laid bare in their drawings.

One at a time, the children, from toddlers to pre-teens, walk up to the front, shyly introducing themselves while shaking the puppets' tiny hands. By JOHN WESSELS (AFP)

Some drew military helicopters, while others sketched the makeshift structures that have become their new homes, built from bamboo reeds and mud at the dusty camp.

The children "are more open to draw, they are happy to express emotions," said Erickmar Rodriguez, mental health activities manager for Doctors Without Borders (MSF) at the camp.

"This is really good because it is important to recover," she told AFP.

At a nearby village where the displaced are being resettled, a Catholic priest is using puppets to help the children heal invisible scars from the conflict.

Two men held up the traditional fabric by the corners, and the priest vanished behind the makeshift screen.

Little puppets mounted on long bamboo sticks emerged from behind the screen, cheerfully greeting the children, voiced by the priest.

One at a time, the children, from toddlers to pre-teens, walked up to the front, shyly introducing themselves while shaking the puppets' tiny hands.

Afterwards, they formed a circle and threw a ball back and forth, then enjoyed some candy.

For the children it's "therapy and entertainment, something informal... It is very simple," Silva said.

The puppet show aims 'to bring a little hope and joy to these children,' Silva said.. By JOHN WESSELS (AFP)

Most of the children were orphaned or separated from their parents by the violence, and the sessions may help reunite some of them with their families, he noted.

"The insurgency changed everything," Silva said.

The puppet show aims "to bring a little hope and joy to these children with simple activities through small dolls, the ball, and a small candy, so that they can make their lives a little bit happier," he said.

Police beef-up security at traffic intersections over daylig...
37 minutes ago