A President Who Does Not Mean His Words 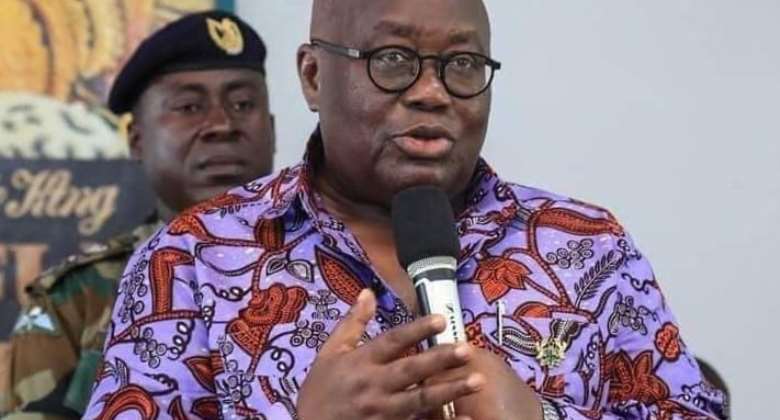 The ruling NPP government's knee jerk reaction to the hashtag #fixthecountrynow is a typical display of 'arrogance of power' which is the first and clear signal of a ruling government in decay, moribund in ideas and on its way out of power.

We-the-people are wising up. Our hardships are real. Our anger is boiling. We may appear timid, but appearances are deceptive. Be warned.

Even our armed forces are whispering. Anger amongst our youth has reached lethal levels. It is no longer a question of partisanship. Basic water has become so scarce in our country, the high cost is no longer our concern. Lack of availability is now facing us. We are near crisis levels.

As for the Dumsor, the ruling NPP government has unprecedentedly succeeded in mismanaging power despite inheriting ''excess capacity'' from president John Mahama and his erstwhile NDC government. They now have the benefit of all the John Mahama and his government's past investments in energy, yet, they have no answers to the current power crisis. They are totally bankrupt in ideas!

We have the men my foot!! Men who cannot think, are those also men?

The ruling NPP government of Ghana are now lost for words. They have now realised that it is easy to say this and that when it is your party is in opposition. And it is a different song you have to sing when you are given the power to govern.

President Nana Akufo Addo promised us that he will #fixthecountry

And even in the midst of a devastating global Covid-19 pandemic, this NPP government and its officials used it as an opportunity to enrich themselves and their family and friends.

Take the PCR tests contract at the airport for example, where they exploited Ghanaian and foreign travellers at a whooping cost of 150 usd each time they passed through the airport.

After so many months of exploitation accompanied by public outcry against the insensitivity of the President, his government finally and reluctantly intervened with the so-called 'private business' to reduce the cost of testing to 50 usd for all Ghanaians. The private company at the centre of that scheme is a front for government officials - and we all know that by now.

If 50 usd could do it, why did it take the government so long to take the price down? So government and NPP party agents could accumulate millions of usd in profits from their own people who are under distress brought forth by devastating effects of Covid-19 abroad ? No caring government will act so insensitively and avariciously in the midst of a public health crisis. A President in his twilight should care more about the next generation than this.

Stimulus And Tax In A Pandemic

But whiles some leaders of some countries are creatively responding by giving stimulus packages (including free money) to their citizens, our government is asking Ghanaians to pay more taxes on all essential commodities. They argue that we must pay for their stimulus package of ''free water'', ''free electricity'', ''free hot meals'' they supposedly gave out to a small section of Ghanaians. And now we are also paying for a ''free shs' that has turned out to be a big sham.

Last time i checked, final year shs students still sat home two months to their final exams due to lack of adequate classrooms and dormitories in a so-called free shs system. How is this going to improve or even maintain quality of education?

Obviously President Nana Akufo Addo and his NPP government are truly not interested in the quality of education. They only appear interested in winning elections. All the promises of free things from the NPP have amounted to mask wearing and a disguise of their true intentions towards the people of Ghana.

And now that the President has no election to win, he has began to take off his mask and that of his entire regime. He has began to emasculate Ghanaians while Covid-19 is still here with us. He has no patience to consider the suffering of the masses.

''I tell President Mills, if the economy is broke, fix it'' - Nana Akufo Addo as opposition leader.

Now we-the-people tell President Nana Akufo Addo, if the country is broke, fix it. Otherwise, admit that you are not a fixer. Throw your hands in the air and give up. There is something called RESIGNATION in public office. It is a tool for those leaders who have failed and still have the integrity to admit to themselves that they have failed, to redeem themselves by giving up power.

What other options does he have? Hasn't he and his government run out of any reasonable excuses for presiding over a much broken country than left for him by President John Mahama and the NDC??

Consider even the 88 district hospitals he promised to build in the midst of the pandemic and gained international acclaim for it, where are they? Have they yet identified the land on which they are going to build them? No! They didn't mean that one too. At all.

Again, it was just another opportunity for our President, who is in his twilight, to hoodwink we-the-people into believing his pie in the sky election winning fables.

A President Who Does Not Mean His Promises

Even his most cherished national cathedral, a project which our President decided to build against overwhelming public disapproval, that one too is still in limbo, despite government haven pulled down valuable state property to make way for the erection of the widely disapproved cathedral. Our President Nana Akufo Addo has not only failed to honour his promises to the people, he has also failed to honour his promise to God.

Does our President think that he can mock God and go scot free? Well he has already mocked the people whose voices represent the voice of God.

Some of us see a whirlwind coming to sweep away the untold hardships of the people imposed by a government presiding over corruption, nepotism, mediocrity, incompetence, avarice, economic crime, culture of silence, police brutalities, looting of public assets by government officials, kickbacks, family and friends regime. This whirlwind cannot be resisted by any form of establishment.

Be Wise. Be instructed, Mr. President!