Challenges and Prospects of SMEs and Entrepreneurship in Africa 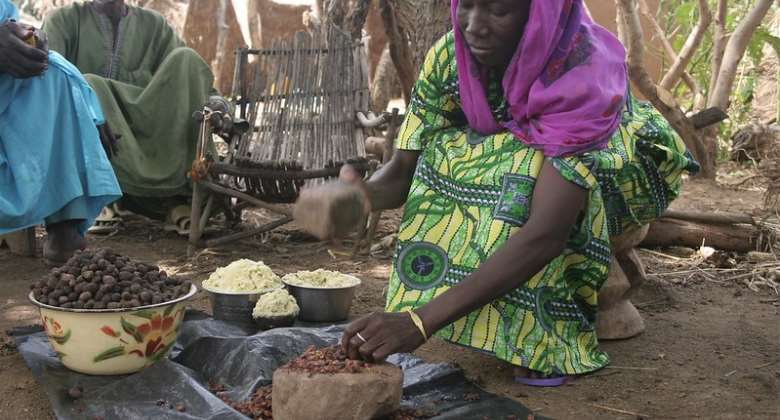 With a high market value and uses in cooking and cosmetics, Shea butter has become known as Burkina's gold. By training groups of entrepreneurs in the best processing methods and how best to sell their end product, TREE AID is turning an everyday tree product into meals, medicines and schooling. Photo: Tree Aid via a CC BY 2.0

The World Bank’s Doing Business report for 2020 suggests that Nigeria, Africa’s largest economy and Togo are on the global list of top improvers – countries in sub-Saharan Africa (SSA) continue to improve as 73 reforms in business regulations were enacted during the duration of the Bretton Wood institution’s recent study but the region’s ease of doing business score of 51.8% is below the global average and the OECD high-income average of 63% and 78.4%, respectively. The country-level business climate on the continent differ immensely as the business environment of countries in Africa are dissimilar although several regional economic integration initiatives such as Economic Community of West African States (ECOWAS), Common Market for Eastern and Southern Africa (COMESA) and more recently African Continental Free Trade Area (AfCFTA) have been initiated.

Entrepreneurship is an integral component of African economies – it is not surprising that the Global Entrepreneurship Monitor (GEM) report for 2014, ranked Uganda as the World’s top entrepreneurial country. Most business entities in Uganda are small-scale ventures and operate extensively in the informal sector – young entrepreneurs have low growth expectations as not many of them innovate or develop new products. According to Uganda Investment Authority (UIA), a semi-autonomous government agency responsible for the promotion of investment and facilitation of organizations, micro, small and medium-sized enterprises account for about 90% of all businesses in the private sector: contributing 49% in the services sector, 33% in commerce and trade, 10% in the manufacturing industry and 8% in other areas. Collectively, micro, small and medium-sized enterprises account for more than 80% of Uganda’s manufactured output and contribute 20% of GDP. Entrepreneurs in Uganda most often create new products rather than invest in an existing product. This phenomenon usually leads to the discontinuation of many businesses in the east African country.

Conversely, quitting an entrepreneurial venture as a result of a new business opportunity or a job is comparatively low on the African continent as compared to other parts of the world. The Global Entrepreneurship Monitor (GEM) report for 2014 shows the three main reasons for business discontinuance in all regions: non-profitability of a business venture, personal reasons and lack of funding. Although the aforementioned reasons are experienced in Africa, lack of finance has a dominant effect on entrepreneurial activity on the continent, more than any other region in the world but discontinuing an entrepreneurial venture for another job or business opportunity is comparatively the lowest in Africa.

Although access to finance for entrepreneurial activity is an unending snag in the region, Africans continue to show unwavering interest in entrepreneurship. In a neoteric survey conducted by PBS Research, on behalf of the Ichikowitz Family Foundation, the findings reveal that more than 50% of the youth in 14 African countries will engage in an entrepreneurial venture if they are given $100 as capital.

Even though the GEM survey in 2014 palpably indicates how Africa leads the rest of the world by the aggregate size of early-stage entrepreneurial activity and established business ownership, contemporary research shows that in African economies, venture capital, foreign direct investment and bank credit is often extended to established businesses, partially neglecting early-stage entrepreneurs.

Another study also shows that early-stage entrepreneurs in Africa rely extensively on personal savings and funds from family and friends for their entrepreneurial ventures, with migrant remittances constituting a large chunk of these funds - household surveys conducted by the African Migration Project in Nigeria, Senegal, Kenya, Burkina Faso and Uganda enumerates a significant percentage of the remittances are expended on entrepreneurial ventures in agriculture and other sectors.

In Africa, the culture of entrepreneurship is considered to be a desideratum for survival. Even though this narrative is gradually ameliorating with entrepreneurship now considered by many in the region as a career or an opportunity to serve a population rather than a last resort, high-impact entrepreneurship in Africa has been comparatively low – formal employment is prioritised over entrepreneurial venture by a large percentage of the population.

Successful entrepreneurs on the African continent are idolised, mainly for their affluent lifestyles but little or no interest is shown in their entrepreneurial shrewdness by the youth. Most young people in Africa veer into entrepreneurship with the primary aim to accumulate wealth and emulate the accomplishments of well established entrepreneurs - without the required skill set in most cases; these poor decisions continue to impede innovation in SMEs and entrepreneurial ventures.

This situation has been heavily influenced by the competition between entrepreneurial ventures, SMEs and well established corporate organizations - it has become increasingly daunting for entrepreneurs and owners of SMEs, especially those with little or no relevant technical expertise in business management, information technology and engineering to attract and retain well qualified professionals to compliment their employee strength – evidence from the United Nations Educational Scientific and Cultural Organization (UNESCO) shows, Africa has a high rate of educational exclusion, making education on the continent inaccessible to a large population. As at September 2019, SSA was the region in the world, with the highest number of out-of-school rates for all age groups, a position the region had retained from the previous year. Additionally, the educational system in most African countries does not equip students with adequate practical skills for professional endeavours - lack of appropriate educational resources for students and teachers has reduced teaching and learning to solely theory education thereby neglecting the practical facet.

The GEM Women’s Entrepreneurship report for 2018/2019, highlights the flaws in entrepreneurial education in Africa. The dynamics of the business environment shows that entrepreneurial activity is highly skewed towards the wholesale and retail industry.

A well planned and effectively implemented infrastructure investment in a country or region plays a crucial role in improving productivity and integrating local economies into the global economy but poor infrastructure development, which is undeniably one of Africa’s top challenges, has constrained productivity, increased cost of production and reduced growth for SMEs and entrepreneurial enterprises in the region. According to the Infrastructure Consortium for Africa (ICA), although investment in infrastructure increased to a little over $83 billion between 2016 and 2018, Africa still has infrastructure financing gap of $53 billion to $93 billion annually – with the key areas being energy, transport, water and sanitation, Information and Communication Technology (ICT). Africa’s main sources of funding for infrastructure comes from Governments in Africa, China, private sector, members of Infrastructure Consortium for Africa (ICA) and bilateral or multilaterals. In 2018, $32.5 billion, $13.3 billion, $43.8 billion, $4.1 billion and $7.1 billion were invested into the transport sector, water and sanitation sector, energy sector, multi-sector and the ICT sector, respectively.

In spite of the increment in investment in infrastructure in recent times, many countries in Africa continue to experience limited supply of electricity, water, poor communication infrastructure with narrow and limited road networks which in most cases do not extend into the hinterlands. This egregious condition has consistently shaped the transactions of entrepreneurial enterprises and SMEs that rely heavily on electricity, water, road networks etc. To have a reliable physical infrastructure, SMEs and entrepreneurs incur additional cost in acquiring standby generators among other facilities to enhance their business activities.

Infrastructure investment in ICT in Africa is yielding encouraging results as SSA is reported to be the fastest growing mobile economy in the world. The report by GSMA further reveals that, the region will have a mobile subscriber base of 623 million by 2025 - thus, about half the population of Africa will be connected. This will contribute about $185 billion or 9.1% to Africa’s GDP via improved productivity that will be achieved by the mass adoption of mobile services.

With the highest number of registered mobile money accounts in the world, mobile money services in SSA is gradually replacing traditional banking in Africa. The increased usage of mobile money has changed the routine for payment and business transactions.

In Kenya, where M-Pesa, a mobile payment service is widely used as a medium of payment for goods and services, entrepreneurs and SMEs are now veering into digital lending in various sectors of the economy. A typical example is FarmDrive, a social start-up that uses data, mobile phones and machine learning to support the underserved and unbanked smallholder farmers to access credit from local banks is assisting about 3 million smallholder farmers to access credit in the next five years.

Alexander Ayertey Odonkor is an economic consultant, chartered financial analyst and a chartered economist with a stellar expertise in the economic landscape of countries in Asia and Africa. Alexander has carried out the International Monetary Fund’s (IMF) program on Financial Programming and Policies – with a master’s degree in finance and a bachelor’s degree in economics and finance, Alexander also holds postgraduate certificates in entrepreneurship in emerging economies and electronic trading in financial markets from Harvard University and New York Institute of Finance, respectively.